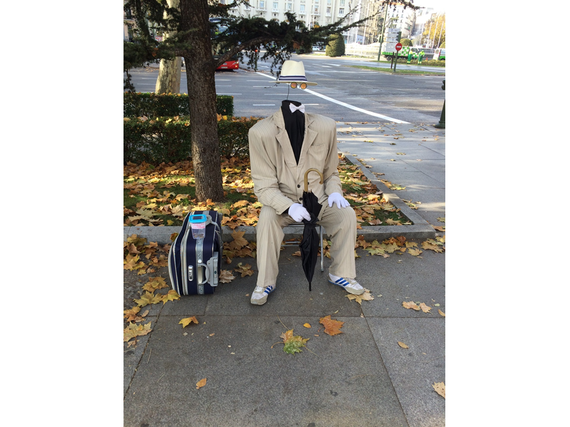 Trade has been a key driver of global growth, income convergence, and poverty reduction. Both developing countries and emerging market economies have benefited from opportunities to transfer technology from abroad and to undergo domestic structural transformation via trade integration in the last decades. Yet, more recently, concerns have been raised over whether the current pace and direction of world trade lead towards a lesser development-boosting potential.

What happened to world trade? Is it cyclical or structural?

World trade suffered another disappointing year in 2015, experiencing a contraction in merchandise trade during the first half and only low growth during the second half. This follows a similar pattern since the onset of the global financial crisis (GFC), in which world trade volumes have lagged behind GDP growth (Figure 1). 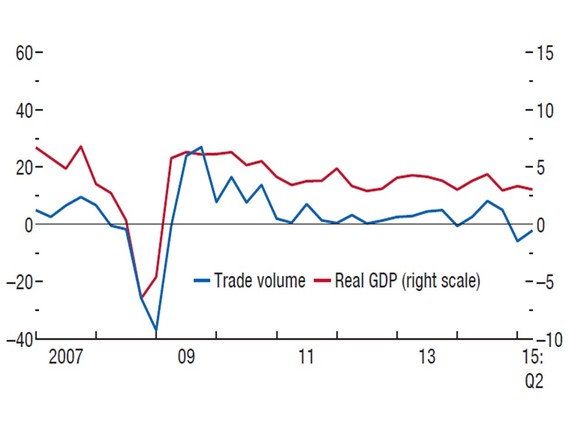 Economists have indicated some circumstantial factors to explain this post-GFC pattern (Dadush, 2015) (Didier et, 2015, p.18). For instance, world GDP and trade figures would be reflecting the fact that the highly open-trade countries of the Eurozone have had a sub-par growth performance relative to the rest of the world. Furthermore, the weak recovery of fixed investments in advanced economies - Canuto (2014a) - has suppressed an important source of trade volume, given the higher-than-average cross-border exchanges that characterize such goods.

While those post-crisis factors have certainly played a role, some structural trends seem also to be at play. As suggested by Figure 2, after steadily increasing between the mid-1980s and the mid-2000s, the trade elasticity to GDP has lost steam (though it remained above one, thus implying that trade was still rising faster than GDP). After jumping in previous decades, the world's exports-to-GDP ratio seems to have started to approach some plateau (or a "peak trade"). Since 2008, world trade has been rising slower than GDP at around 0.8:1, leading to a fall in the share of exports in global GDP. However, even if post-GFC factors were partially reversed, the presence of a long-term trajectory of trade elasticity displaying a slowdown already prior to the recent pattern would suggest no automatic return to the heyday. 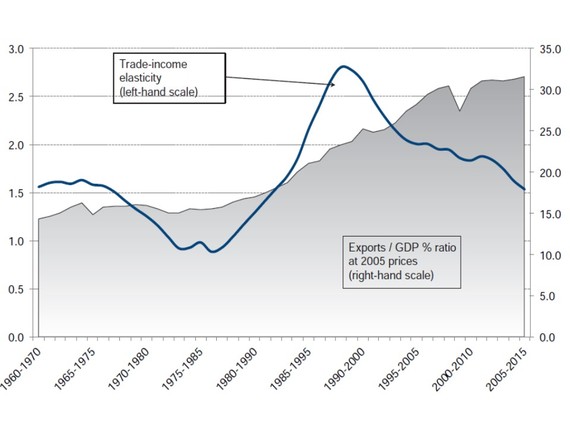 Notes: Merchandise exports only; world GDP and trade at constant 2005 prices; dollar figures for GDP are converted from domestic currencies using official exchange rates. Long-term elasticity is based on 10-year rolling period from 1960-1970 to 2005-2015 (2015 is based on forecasts).

Hoekman (2015) brings a thorough examination of both "cyclical" (post-GFC) and "structural" hypotheses about the global trade slowdown. Regardless of the weight attributed to these factors in explaining recent developments, three processes stand out as relevant for the purpose of analyzing what lies ahead in terms of the link between global trade and development. Two of them were "transitional" - in the sense that they were "one shot" - the unfolding of which occurred behind the extraordinary ascent of the global export-GDP ratio. The third one has evolved more gradually and will likely carry a significant transformative role ahead.

The period from the mid-1980s to the mid-2000s was peculiar in several aspects. For one, these decades featured a process of economic reforms that aimed to remove barriers to trade, a multilateral trading system that reduced uncertainty for traders, and technological advances that reduced trade and communications costs. Combined, these trends ushered in years of sustained trade expansion. Average tariffs moved to well below ten percent, and in many countries a significant share of trade became duty-free. Advances in transport (such as containerized shipping) and information and communications technologies greatly reduced the cost of shipping goods and of managing complex production networks. Together these developments led to two major changes in the structure of global trade: (a) the vertical and spatial cross-border fragmentation of manufacturing into highly integrated "global production networks" or "global value chains" (GVCs); and (b) (to a lesser extent) the rise of services trade (Canuto, Dutz & Reis, ch. 3 in Canuto & Giugale, 2010) (Canuto, 2012).

The full establishment of cross-border GVCs intrinsically raises trade measured as gross flows of exports and imports relative to GDP, a value-added measure, because of "double counting" of the former - although the ratio of trade to GDP still increases even when trade is measured on a value-added basis (Canuto, 2013a). Given the then-prevailing technological state of arts in production processes, the policy and enabling-technology breakthroughs above mentioned sparked a powerful cycle of fragmentation, especially in manufacturing, with a corresponding cross-border spread of GVCs.

The re-shaping of the economic geography might have kept the pace with global trade impacts via further dislocation of fragments of GVCs, depending on the evolution of country locational attributes. Technological changes might also have altered optimal spatial configurations of the various manufacturing activities, as well as extended fragmentation to other sectors. This may well be the case ahead, as technologies and country policies keep evolving - some analysts point to a greater reliance on regional production networks, while others refer even to a potential reversal of GVCs because of 3D printing ("additive manufacturing") (see references in the introduction of Hoekman (2015)).

However, the wave of cross-border manufacturing fragmentation of mid-1980s through the mid-2000s was particularly intense and time-concentrated (Canuto, 2015a). Figure 3 - from Constantinescu et al (2015) - shows that the ratio of foreign value added to domestic value added in world gross exports increased by 2.5 percentage points from 2005 to2012, after having risen by 8.4 percentage points from 1995 to 2005. 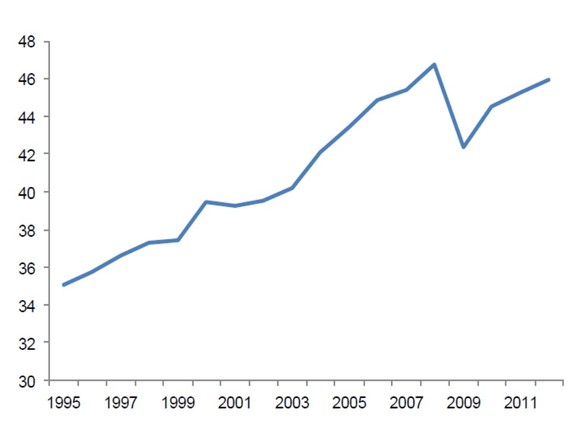 The wave of fragmentation of manufacturing activity benefited from the incorporation of large swaths of lower-wage workers from Asia and Eastern Europe into the global market economy (Canuto, 2015a). Conversely, the former facilitated a process of growth-cum-structural-transformation with substantial total factor productivity increases in these countries via transfer of population from low-value, low-productivity activities to the production of modern tradable goods, for which foreign trade was instrumental - with China as a special case both in terms of speed and magnitude (Canuto, 2013b) ((Gautier et al, ch. 5 in Hockman (2015)).

The transitional nature of such a lift of world trade relative to world real GDP, even as the latter grew substantially, stemmed from the inevitable tendency of both starting to rise more in line once the intense transformation approached completion. Its extraordinary intensity also reflected a peculiar - and transitory - combination of ultra-high investments-to-GDP and trade-surplus-to-GDP ratios in China with large current-account deficits of the U.S. (Canuto, 2009).

More recently, China has initiated a rebalancing toward a new growth pattern, one in which domestic consumption is to rise relative to investments and exports, while a drive toward consolidating local insertion in GVCs to move up the ladder of value added is also to take place. That rebalancing has been pointed out as one of the factors behind the recent global trade slowdown, given China's weight in the world economy and a recent trend of "import substitution" as illustrated in Figure 4. 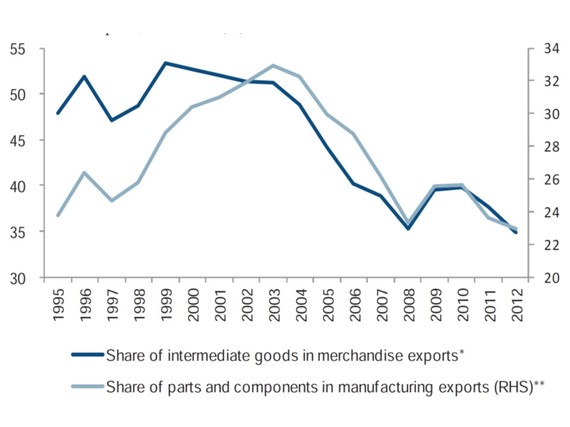 While both the GVCs' rise and growth-cum-structural-transformation - especially in China - were taking place, with corresponding impacts on the landscape of foreign trade, advanced - or mature market - economies maintained a steady evolution toward becoming services economies - a trend maintained after the GFC. Lower GDP shares of the value added in manufacturing have accompanied rising shares of employment in services (Figure 5). 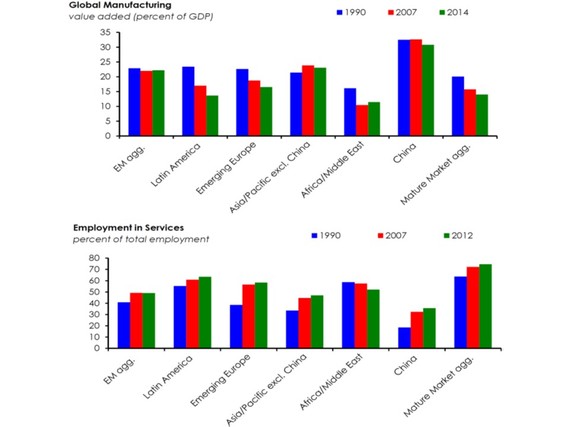 Source: Institute of International Finance, "The rise of services - what it means for the global economy", December 15, 2015.

Both supply and demand factors explain such trends in advanced economies. On the supply side, beyond the higher pace of increases of productivity in manufacturing than in services (with correspondingly different rhythms of reduction in labor requisites), not only did the relative prices of manufactured goods fall, but a substantial part of local production was also off-shored as a result of GVCs and the incorporation of cheaper labor from areas previously out of the market economy world. On the demand side, one may point out both a higher income-elasticity of demand for services - reinforced by aging of the population - and to technology trends favoring "software" vis-à¬-vis "hardware" - or "intangible" relative to "tangible" assets - as leading to an increasing weight of services in GDP and employment (IIF, 2015).

Those evolutionary features of supply and demand would also be valid for emerging market and developing countries - even if, as suggested in the upper half of Figure 5, they were partially mitigated in China and other Asia/Pacific countries by sucking manufacturing activities from other emerging market and developing economies. In any case, given the state of current technological trajectories, rising shares of services throughout would imply an anti-trade bias, given a still higher trade-propensity of manufacturing.

IIF (2015) goes as far as to argue that this has already brought consequences for the global business cycle, rendering it less influenced by swings in manufacturing output, with shock transmission from advanced economies increasingly taking place via trade of services among themselves and more weakly to manufacturing-dependent emerging market and developing economies. This would be one of the factors behind the abrupt decline of the world trade elasticity and of the recent decoupling of growth between recovering advanced and decelerating emerging economies.

Has the window of opportunity of developing via trade integration narrowed?

World trade may well live through a new era of rise relative to GDP (Hoekman's introduction in Hoekman (2015)): on-going technological trajectories may deepen the fragmentation and increase the tradability of services; new vintage trade agreements - including possible TPP and TTIP (Canuto, 2015b) - are giving special attention to restrictions on trade of services. In fact, the content of services in current foreign trade transactions has already been higher than what gross trade figures display (Canuto, 2014b).

Another question is what lies ahead in terms of growth opportunities for non-advanced economies through foreign trade given the lines of evolution of the latter along the lines here described, one in which the factors that led to the "peak trade" seem to have exhausted. The nature and height of domestic policy challenges have changed substantially in a three-fold way:

First, China is in a league of its own and its rebalancing-cum-upgrading will condition other emerging market and developing economies. If it lets low-skill labor-intensive manufacturing activities go, a new wave of further GVC dislocations may open opportunities for countries currently endowed with cheap and abundant labor. On the other hand, its densification of local parts of GVCs will represent a competitive challenge to medium-range manufactures produced in other middle-income countries. The net result will also depend on the leakages outward of its domestic demand as it rebalances toward a more consumption- and service-oriented economy.

Second, the directions taken by technological trajectories and aggregate demand in advanced economies seem to point toward a broad alteration of the balance of locational advantages for production fragments, decreasing the weight of labor costs and augmenting the relevance of local availability of other complementary intangible assets. A "double whammy" on production and exports of non-advanced economies may take place: a partial reversal of off-shoring and a slower growth of outlets for their typical exports. Third, the bar, in terms of what it takes to countervail that double whammy (improvements of the local business environment and transaction costs, quality of economic governance and other conditions favorable to accumulation of intangible assets) has been raised. Nonetheless, provided that such bar is reached, the local provision of - embodied or disembodied - services complementary to those produced or used in advanced economies may flourish. This will be the case, e.g. of natural resource-rich countries that manage to develop related intangible assets in terms of applied-science capabilities.

* Written from my notes for a presentation at "The role of the US in the world economy", OMFIF, Federal Reserve Bank of Atlanta, 12-13 November 2015.