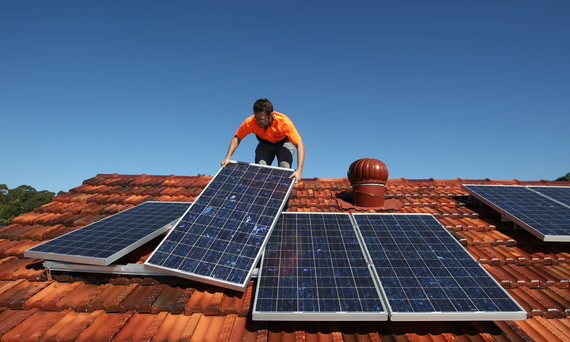 On February 5 the power utility of California's capital Sacramento decided to cancel the $1.5 billion Iowa Hill Dam, a pumped storage project in the foothills of the Sierra Nevada. The decision may not be remarkable by itself, but marks a watershed moment and signals the early beginnings of an exciting development away from large dams.

The Iowa Hill Pumped-Storage Project had been under preparation since 2001. The utility planned to pump water from the Slab Creek Dam on the American River to the proposed reservoir during off-peak hours, when power is cheap, and release it through a 400 megawatt power house during peak hours, when electricity is more expensive. The pumped storage project would have served as a battery that could store wind and solar power for the times when the sun doesn't shine and the wind doesn't blow.

Ironically, the rapid growth of variable and intermittent wind and solar power has been an important driver for dam building in recent years. A new report from the World Energy Council explains: "When wind turbines or solar panels are injecting energy into a grid, hydropower units can reduce their own output and store extra water in their reservoirs. This storage can then be used to increase hydropower output and fill the gap when the wind drops or the sun is covered by clouds and input from these sources falls."

In Norway, Portugal, Spain and other countries, a lot of new hydropower plants are riding on the coattails of the European wind and solar boom, and dam builders in other world regions are hoping to do the same. This has raised the question whether the surge in wind and solar power, while very welcome, might condemn the world's last free-flowing rivers to be dammed.

As the recent decision by the Sacramento power utility demonstrates, dams and reservoirs are not the only way to balance wind and solar power. The utility explains that new ways of storing power have come up that may soon make large reservoir dams uneconomic. "The electric utility business is moving away from large, central power plants in favor of wider distribution of energy resources, including battery storage and solar installations," the utility says. In particular, "the technology for storing electricity in lithium-ion batteries has advanced at a surprising rate recently and could become economical on a larger scale in the next decade."

The growing popularity of electric cars has spurred a lot of research into cheaper, more effective and less environmentally damaging forms of battery storage. Tesla Motors is currently building a giga-factory for the production of lithium-ion batteries for its electric vehicles. As prices fall, such batteries become an attractive option for storing the power generated by solar panels by individual households. Tesla's Powerwall battery, for example, is the size of a suitcase and is sufficient to power most homes during the evening from solar power generated during the day. It currently costs about $3000.

Batteries linked to solar panels are still more expensive than the power that the electric grid provides from hydropower reservoirs and other sources. Yet this is changing quickly. Last year, Deutsche Bank predicted that batteries will become the "killer app" and "holy grail" of solar power, and will be cheap enough for mass deployment within five years. Australia's Climate Council predicted at the same time that half of all Australian households will adopt solar systems with battery storage within ten years. Developing countries are expected to experience the same trend a few years later.

Affordable battery storage will change the way the power sector works. "Power is no longer something that is exclusively produced by huge, centralized units owned by large utilities," the Swiss bank UBS explained in 2014. "By 2025, everybody will be able to produce and store power. And it will be green and competitive, ie, not more expensive or even cheaper than buying power from utilities. ... Large-scale power generation, however, will be the dinosaur of the future energy system: Too big, too inflexible, not even relevant for backup power in the long run."

These assessments were not written by Silicon Valley geeks or wishful thinkers, but by hard-nosed financial analysts concerned about investment in traditional power utilities. Given that old habits die hard, I have no doubt that many dams will continue to be built. And I have been wondering when we would see the first example of a shift away from traditional storage in hydropower reservoirs. The cancellation of the Iowa Hill Project shows that the first power utility has seen the signs on the times.