Freshwater is fundamental for maintaining human health, agricultural production, economic activity, and critical ecosystem functions. But as populations and economies grow, new constraints on water resources are appearing, raising questions about ultimate limits to water availability. Such resource questions are not new. The specter of "peak oil" -- a peaking and then decline in oil production -- has long been predicted and debated. A recent paper in the Proceedings of the National Academy of Sciences I wrote with a colleague, Meena Palaniappan, offers three concepts of "peak water:" peak renewable water, peak nonrenewable water, and peak ecological water. And it looks like the U.S. has passed all three points.

Peak renewable water applies where flow constraints limit total water availability over time. Peak nonrenewable water is observable in groundwater systems where production rates substantially exceed natural recharge rates and where overpumping or contamination leads to a peak of production followed by a decline, similar to more traditional peak-oil curves. Peak "ecological" water is defined as the point beyond which the total costs of ecological disruptions and damages exceed the total value provided by human use of that water.

Peak Renewable Water. A significant fraction of total human use of water comes from water taken from renewable flows of rainfall, rivers, streams, and groundwater basins that are recharged over relatively short time frames. Because a particular water source may be renewable, however, does not mean that it is unlimited. Indeed, the first peak water constraint is the limit on total water that can be withdrawn from a system. The ultimate limit is the complete renewable flow.

When human demands for water from a watershed reach 100 percent of renewable supply, we can't take any more, and we've reached "peak renewable" limits. Indeed, problems begin to arise long before demands reach 100 percent of renewable supplies. For a number of major river basins, peak renewable water limits have already been reached. The Colorado River in the United States, for example, is shared by seven US states and Mexico, and in an average all the parties take all the water. Other rivers are increasingly reaching their peak limits as well, including the Huang He (Yellow River) in China, the Nile in Northern Africa, and the Jordan in the Middle East, where river flows now often fall to zero before they reach their ends.

Peak Nonrenewable Water. In some watersheds, water comes from stocks of water that are effectively nonrenewable, such as groundwater aquifers with very slow recharge rates or groundwater systems damaged by compaction or other physical changes in the basin. When the use of water from a groundwater aquifer far exceeds the natural recharge rate, this stock of groundwater will be quickly depleted. Or when groundwater aquifers become contaminated with pollutants that make the water unusable, a renewable aquifer can become nonrenewable, very much like oil fields. Continued production of water beyond natural recharge rates will become increasingly difficult and expensive as groundwater levels drop, leading to a peak of production, followed by diminishing withdrawals and use. This kind of unsustainable groundwater use can be found in the Ogallala Aquifer in the Great Plains of the United States, the North China plains, California's Central Valley, and numerous basins in India. In these basins, extraction may not fall to zero, but current rates of pumping cannot be maintained.

Peak Ecological Water. For many watersheds, a more immediate and serious concern than running out of water is exceeding a point of water use that causes serious or irreversible ecological damage. Not only does water sustain human life and commercial and industrial activity, but it is also fundamental for animals, plants, habitats, and environmentally dependent livelihoods. Each new incremental supply project that captures water for human use and consumption decreases the availability of that source to support ecosystems and diminishes the capacity to provide services. The water that has been temporarily appropriated or moved was once sustaining habitats and terrestrial, avian, and aquatic plants and animals. By some estimates, humans already appropriate almost 50 percent of all renewable and accessible freshwater flows, leading to significant ecological disruptions. Since 1900, half of the world's wetlands have disappeared. The number of freshwater species has decreased by 50% since 1970, faster than the decline of species on land or in the sea.

The term "peak ecological" water refers to the point where taking more water for human use leads to ecological disruptions greater than the value that this increased water provides to humans. Economists have long noted the difficulty of quantifying this point because of problems in assigning appropriate valuations to each unit of water or each unit of ecosystem benefit in any watershed, but the mistaken assumption that such values are zero has led to them being highly discounted, underappreciated, or ignored in 20th century water policy decisions. 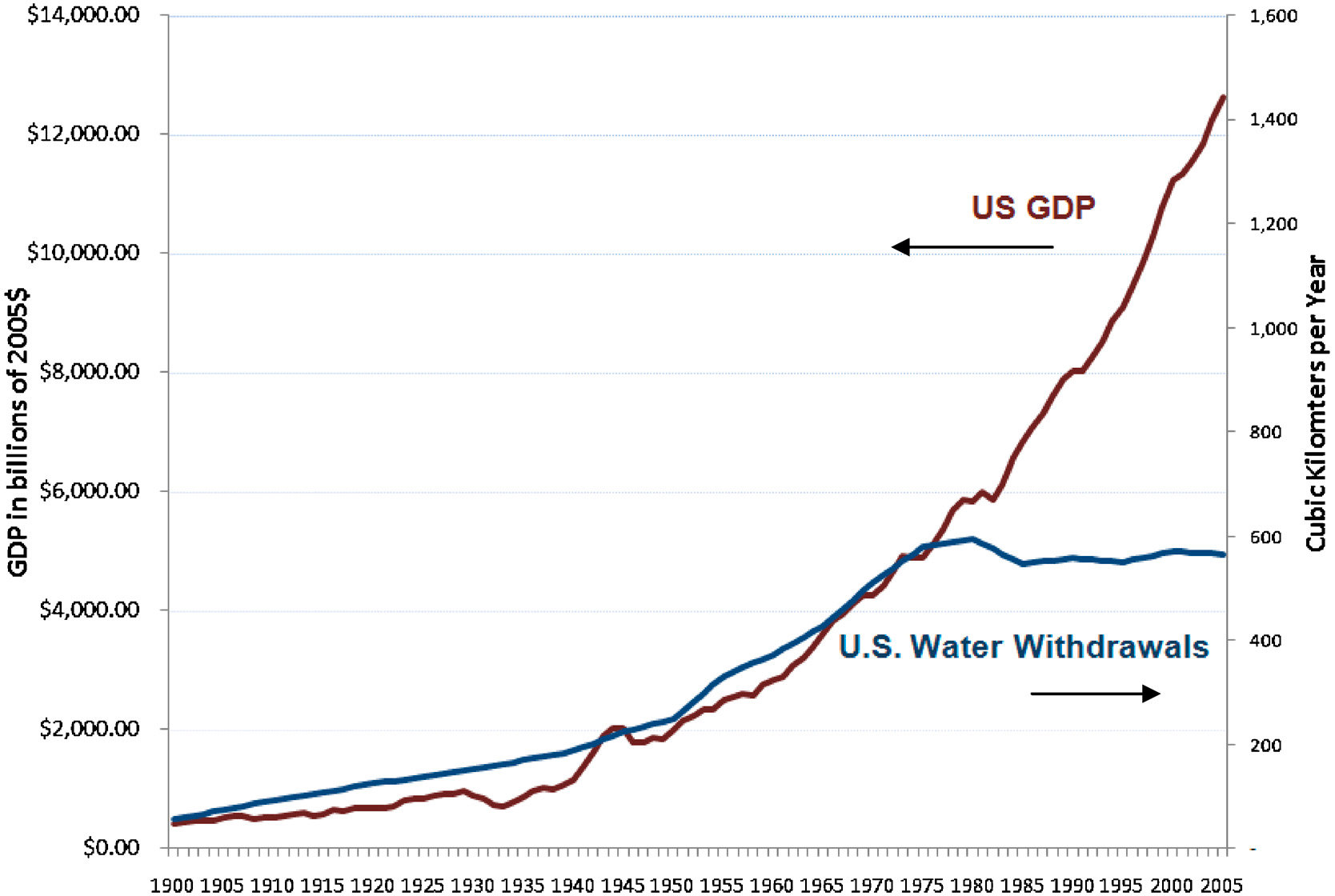 There is strong evidence that the United States may have already passed the points of peak water, including peak renewable, nonrenewable, and ecological water, in many watersheds, especially (but not exclusively) in the more arid west. Indeed, when we look at data on total water withdrawals and use in the US (see the Figure, which shows total US water withdrawals and total US GNP over the past century), it shows that maximum water use occurred more than 30 years ago, and that we are now using less water overall, and much less water per person, than in 1980. The bad news is that this suggests we have reached, or passed the point of peak water -- as is increasingly obvious in the regions I've mentioned above. The good news, however, is that we have been able to continue to grow our economy and meet the demands of growing populations, with less and less water, through smart technology, regulations, education, and water conservation and efficiency programs. I think we're in a transition to a new way of thinking about and managing our water. And the sooner the better.