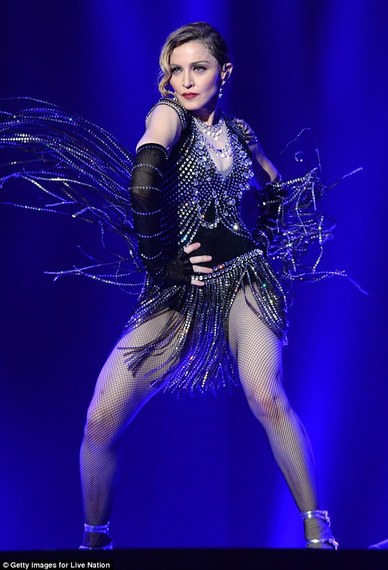 It's not always easy being a Madonna fan. Her occasional slip-ups notwithstanding -- even I cringe at the opening lines to Rebel Heart's "S.E.X." -- the real challenge is listening to and reading the criticism that's been riding the Queen of Pop's coattails for 30 years.

Pretty much no one wants to admit they like Madonna, and any fan who's paid attention knows the drill: Madonna does something, anything, and the nasty words come rolling in. Period. The end. Eye roll. Get a life, lady. Contrary to what you might believe from commentary over the past 10 years, which has focused primarily on how old, redundant and retouched she is, back when she was "semi-" all those things, the words still hurt the one we love.

As for her older music, which is now considered iconic pop, 1998's "Ray of Light" did get Madonna a Grammy for Best Pop Album, but Lauryn (#shewasimPORTANT) Hill got the coveted Album of the Year prize. "Like a Prayer," released in 1989 and widely cited as one of the best pop albums of all time, as well as Madge's best, wasn't nominated for a single Grammy. Anyone too young to know about the woman who rolled on the floor in a wedding dress or displayed her self-stimulant ambitions onstage should know that, even when she was cranking out hits like a beach babe cranks out mermen, her songs were never "good." But, as some were loathe to admit, "fun to dance to."

The I Hate Madonna Handbook came out in 1994 -- proof that pre-Internet trolls existed in the 20th century -- and the following year "The Advocate" gave her their Sissy of the Year award (with her "I am not a lesbian" cover quote she was, apparently, a bigger menace to same-sex equality than Jesse Helms or The 700 Club). She might have graced the cover of every magazine from Life to TV Guide, but she was as putrid as patchouli.

So after another year of bad press and vitriolic reactions to "Rebel Flop" I hit the tour at Madison Square Garden, lucky to see it early on before I read the inevitable has-been recaps. I -- we -- had a great time, savoring the Queen of Pop's updated versions of "Like a Virgin, "True Blue," and "Who's That Girl" in a show that only got better as it progressed. By the time she sang "Material Girl" with a wink (literally) to her Marilyn-reinvented past, it was obvious that Madonna didn't just build the house; she owned it.

What happened next was like a prayer. Within days, weeks and happening still, I started reading good things about Madonna. Really good things. Like Sally Field accepting her Oscar good. I expected to roll my own eyes at the ceaseless "she's singing old songs cause her new ones suck" intellectual notices, amid the scattering of "she's sitting down a lot because the old broad needs a cane to move" constructive criticisms, and instead got flooded with a ton of articles on just how fantastic Madonna really, really is!

Writing a rave for VH1 and changing his new-album tune, Christopher Rosa said, "the Rebel Heart era is, hands down, Madonna's most personal to date. The smiling, fan drawings, warm musings and recognition of old hits -- she's never been this transparent before." Philip Cosores of "CoS" wrote that "Her songs are cultural touchstones, distinct musical memories, and can often completely stand on their own without the frills of lights, dancers and choreography." And "The Inquisitr" did an entire piece called "Madonna Opens Up 'Rebel Heart Tour' to Fantastic Reviews."

My favorite piece came from Lizzy Acker, from "Willamette Week," who subtitled her review "Consider this my formal apology for any negative thing I have ever said about Madonna." Acker nails the show, and Madonna's popularity, to perfection, speckled with observations like "She missed some notes and that made it so much better. She's 57. She's putting on a show that would make an 8-year-old with ADD tire." It's an especially sweet valentine, because women tend to be Madonna's nastiest critics.

Almost as shocking as the thrilling notices were the remarks defending -- no, applauding -- her age and sex appeal, even her voice. Jon Pareles of The New York Times noted early on in his review that "she hasn't allowed herself to become an oldies act," and adding, "The Lesson: Madonna, the indomitable sexpot would prevail."

Since even I had criticisms of the concert -- the show gets off to a slow start and the omission, on the night I went, of "Ghosttown," made for an uncomfortable, Music-Interruptus ending -- it made the stream of, deservedly, great reactions baffling. And it can't just be attributed to the nostalgia factor.

Yes, Madonna played a lot of old hits in the show, a long overdue treat. She made references to being nostalgic in her patter and in her early 80's song choices, but she ignored (once again, on the night I went) "Like a Prayer" and "Ray of Light" completely. If there were complaints on that front, they were minimal. Among the highlights were the brand-new "HeartBreakCity," "Unapologetic Bitch" and the Rebel Heart title track. When she sang a somewhat ironic "La Vie en Rose" you could almost hear the critics murmuring, "I gotta admit; she sounds pretty good."

The ultimate concert shock had to be how un-shocking her blasphemy came across. Placed near the beginning of the show, Madonna sang the deliciously dirty new song "Holy Water" with nun-stripper pole-dancers, and a "Vogue" interlude complete with Last Supper bacchanal rap that ended with Madonna as the table's feast, right in time for the last line of the song, "Yeezus loves my pussy best."

It's not the "New Liberal Pope" that kept this section out of the headlines and boycott calls; it's because in today's pop world we've seen it all. The difference between Madonna and the (mostly poor) imitations is how well she did it/does it and her choice to present that section as theatrical license, not enjoyment ultimatum.

As far as the new album goes, the merciless bad press on Rebel Heart has been absurd, much of it coming from bloggers who are furious that she's still singing songs about sex and silly pleasures -- never mind the introspective tracks and ballads. It's easily one of her best albums to date and another example of Madonna's refusal to rest on her laurels.

Even when Madonna interrupted her show the night after the Paris massacres to deliver a speech about the need for tolerance and love, I read nary a comment telling her to "shut up and pretend to sing." Has America gone to the dark side? Or did the media turn into the Grinch at Christmas; opening its heart so much it couldn't help but bubble over with love? I suspect the answer lies elsewhere.

Performing in Brooklyn, Madonna mentioned Sean Penn's reaction to her MSG concert three decades back. "He'd been to my shows 30 years earlier when I was at Madison Square Garden, and he was very upset with me for wearing a costume that was too revealing... Anyway, after the show he wrote me a letter and said he finally appreciates my art. And that's what I have to say about marriage, okay. Thirty fucking years later."

Madonna's grown up, Sean's grown up and perhaps our own rocky relationship with the world's most frustrating star has grown up too. Happy Holiday!