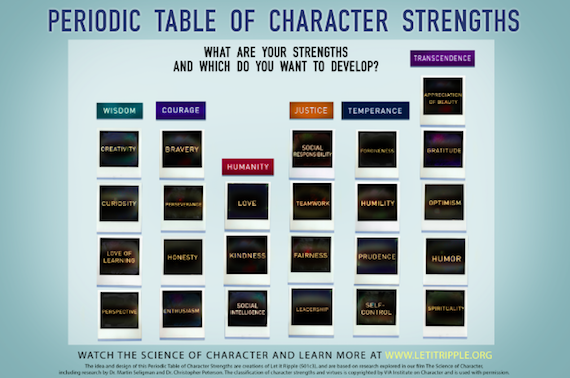 When I looked for inspiring quotes about the concept of character, I realized that nearly everyone and anyone who has ever been an inspiration to me has talked about the stuff, publicly. From Martin Luther King Jr. to Helen Keller, from Henry Ford to Albert Einstein, they have all defined character as essential to our development.

Lets face it, they were right. Character is our biggest asset. And as a result, lack of character can be our loudest liability. Character is what defines us daily, what drives our actions and what motivates how we conduct our lives. But also, and perhaps most importantly how we treat one another. Character is the foundation of humanity.

On September 22nd, the third annual Character Day will take place globally. Around the world, throughout the entire day, conversations will be encouraged about character, how to build it, and its fundamental importance -- on social media, in communities and through organized events. From Australia to Singapore, from the USA to India, from Ghana to Canada, over 121 countries have already signed up for the initiative, led by filmmaker Tiffany Shlain and Let It Ripple Film Studio. Which just goes to prove my theory that if change is going to come, to help heal this damaged world of ours, it will come through filmmakers.

I asked Shlain a few questions about #CharacterDay2016 to get to the heart of the initiative, and the result has introduced me to a new world of endless wonder. I can't wait to follow all the conversations online, and to tweet my own thoughts and questions on September 22nd, with the hashtag #CharacterDay2016.

Could you tell me a little bit about Character Day?

Tiffany Shlain: Character Day is a global initiative where people around the world screen films on the science of character from different perspectives. This is its third year, and there will be over 72,000 screening events in 96 countries and in all 50 states. We also have a global Q&A with incredible thought leaders on the subject. Every half hour over a 24-hour time period, anyone can go to the Character Day website and listen to a different brilliant speaker on the subject and ask them questions.

Why did you decide to create the initiative?

Tiffany Shlain: I think character is a really important subject right now and it demands our renewed focus. I made a film called The Science of Character -- it's an 8-minute movie that looks at the neuroscience and social science on how to develop who you are and who you want to be in the world. I was so fascinated with the research that I really wanted to start a 'Global Conversation' with the ideas in the film. I thought "how can I premiere this film in a new way to start a global conversation?" So we offered the film three years ago for free; we provided discussion questions and a poster, and we said everyone can do their own premiere around the film. We were expecting a few events and we got 1,500 events. Evidently, there was a huge demand and desire to have a conversation about what it means to be a good person and how to develop who you are. What's interesting is, when you think about conversations about character, a lot of those used to take place in religious settings, be it in church, or temple, or religious communities. Then, when our country started really separating church and state and religion from school, that conversation fell by the wayside. I think the reason we're seeing a renewed interest in character is that people have a hunger to talk about these ideas and not necessarily in a religious setting. Conversations about character need to happen everywhere. At home, at school, at work and in the public sphere. Last year for Character Day, we had 6,700 screenings, and this year, our third year, there are 75,000 screenings happening in 96 countries. I think that speaks to where we are currently. Especially, given this election cycle, which has really put into question a lot of issues around character, people are craving this conversation, which is very exciting. There's something inspiring about knowing that people are doing the same thing you're doing in every part of the world -- I think that's part of what makes Character Day special.

At this point, we've made three films about character and this year we're also curating three film series that people can choose from and we have films for every age range and tons of discussion materials and resources, which are available year round.

Character Day has a large focus in schools -- how important do you think it is to teach character building from a young age? Do you think it is the responsibility of educators or something that should be taught at home?

Tiffany Shlain: I think it is everyone's responsibility, and that is backed up by a lot of the findings. It is a whole ecosystem of support that develops someone. It's their own desire, it's parents, it's teachers, and it is constantly reinforcing behavior to develop character. What's really exciting is that a lot people kind of knew that if they focused on something, they could improve it, but now there's a lot of neuroscience backing up those claims. So let's say you want to improve your courage or empathy or humility -- neuroscience proves that you can. The science shows that the more you do something, the stronger the pathways in the brain become and the easier it becomes; it becomes almost habitual. We provide the resources to help you reinforce the behavior you want to improve.

If you want to focus on kindness or courage or humility, you can actually strengthen those parts of yourself and that starts at the youngest age. I'm still focusing on things I want to strengthen, and that is why we have discussion questions from age 4 to age 99. I think we are all always works in progress.

As part of Character Day, you provide resources that act as a catalyst for larger conversations about character, including three of your own short films. Tell us more about this toolkit and why the elements are effective for teaching about character?

Tiffany Shlain: We have The Science of Character, which is 8 minutes; The Making of a Mensch, which looks at the science of character through a Jewish lens (I'm Jewish); and The Adaptable Mind, which is a 10-minute film which looks at the skills you need to flourish in the 21st century. The short film format is really great because it allows you to have a discussion afterward. I often think of the films as the appetizer and the discussion as the main course. We provide participants with materials to dig deep on these subjects. We have a poster, the periodic table of character strengths, which lays out strengths that people around the world agree make up someone's character, and I think is a strong place to start. You look at the strengths and think "what are my three top strengths" and then "what are the three I really want to work on,"and then for the three you want to work on, we provide resources that teach you how to strengthen those qualities. These include daily practices, books you can read, films you can watch, film series, and we are launching an online resource hub called "Character Every Day" that will allow you to pick your age, strength, and form of media, and we will provide you with a tailored list of offerings. It has 5,000 curated items of the coolest films, books, research, lesson plans, and daily practices around each of these things.

Who does the curating?

Tiffany Shlain: It's me and my team -- I do none of this by myself. I have a great team who have been working so hard! We have a lot of amazing partners like Common Sense Media, Class Dojo, and so many more. A lot of times we get amazing curators and put them all in one space, so we went to who we trust the most to create this list. For the last four years we've been focused on this subject, so anything we've seen in our research that we felt was really exceptional is included in there as well.

In your short film The Science of Character, you make an interesting point about how character strengths are generally agreed upon around the world regardless of one's country or religion. Why do you think that is?

Tiffany Shlain: This is all based on research from an amazing psychologist, Martin Seligman, who, along with psychologist Christopher Peterson, flipped psychology on its head. For years psychology was mostly looking at what was wrong with people and then they flipped it and they said, "what if we look at what's right with people and focus on that?" And that is the basis of the positive psychology movement, which has really flourished I think in the last 12 years. We're seeing a flourishing of a whole flip in thinking about who you are and who you want to be and how do you make that better.

What is your ultimate goal for Character Day?

Tiffany Shlain: People are incredibly busy in this 24/7 world, and I think there are a lot of really important questions we need to ask and things we should be thinking about, and we often don't create the space to do that. Character Day is one day to focus on who we are and who we want to be in the world, which are perhaps the most important questions in life. It's not just to work on yourself for yourself, it's to work on yourself for your family, your community, and the world, so Character Day is my team's and my effort to give people tools that they can use to help develop and hopefully evolve this world that we're living in.