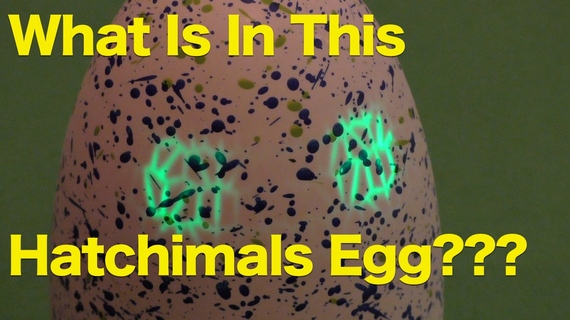 Up until now, that is about all we knew about Hatchimals. The super secret Hatchimals are sure to be a hot toy this Christmas because, after all, who doesn't love a surprise?

While Hatchimals will not be released until October 7th, 2016 - the fine folks at Spin Master sent me a Hatchimals early so I could see what all the buzz was about.

Until October 7th rolls around, here is what I can show you about Hatchimals -

What Do You Think? What Is inside the Hatchimals Egg?

I am hoping you can best the performance of the Zoomer detective squad in the video and take a good guess at what is inside. Go ahead and throw your guess in the comments below.

Myself, I am just hoping they are not tiny self replicating creatures which like to eat human brains. Actually my brain is pretty small, so they would probably skip me and find a bigger meal.

Assuming the Hatchimals do not hatch early and destroy all of humanity, then all will be revealed on #HatchimalsDay 10/7/16. Stay tuned to our channel, we will have a full video on the birth of Hatchimals.

Watch Our Preview Video on Hatchimals
Visit the Hatchimals Site