In September of 2005, the Danish newspaper Jyllands-Posten printed the now-infamous "Muhammad cartoons," sparking riots across the Muslim world, the burning of Danish embassies, and scores of deaths. 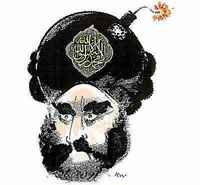 The cartoons were part of a nationwide debate on fundamentalist Islam, following the murder and attempted beheading of Danish filmmaker Theo Van Gogh (great-grandson of Vincent's brother) by a man who claimed his movie offended the sensibilities of Islam.

Last week the left-leaning newspaper Politiken reprinted one of the cartoons, and Denmark found itself with another week-long riot in response.

The decision to reprint was a journalistic act of protest after an alleged plot to murder the cartoonist was foiled by police earlier that day. Politiken stated in an editorial:

"Regardless of whether Jyllands-Posten at the time used freedom of speech unwisely and with damaging consequences, the paper deserves unconditional solidarity when it is threatened with terror."

This gesture by the journalists, balls swinging in the face of those who threaten to bomb and behead them, was an unmistakable assertion that is not heard nearly enough: Free speech is more important than political correctness.

The most distressing aspect of the cartoon scandal was not the violence that resulted, but the quickness of so many in the democratized world to condemn the newspaper in a misguided attempt at cultural sensitivity. The most frightening sound-bites were not the numerous and open calls for the cartoonists' deaths by extremists, but the dogged repetition by apologists of that most ominous slogan, "there are limits to free speech."

Which, of course, is an eye-poppingly Orwellian and stupid thing to say. Nonetheless, the American media by and large opted to get behind this fundamentally oxy-moronic capitulation rather than support their colleagues overseas.

In the months that followed, a vast majority of US newspapers refused to publish the cartoons, or opted to avoid the topic entirely. Both Borders and Waldenbooks stores refused to stock the April-May issue of the magazine Free Inquiry because it included four of the cartoons of the Prophet Muhammad.

Comedy Central, ever boastful of pushing boundaries in its programming, refused to air a scene from South Park episode #10-4, "Cartoon Wars," that featured a depiction of the Prophet Muhammed. They did however permit the broadcast of a scene immediately thereafter in which Jesus defecates on the American flag (a clever bit of protest by writers Matt Stone and Trey Parker.)

The supposition that violence and hysteria are just a natural result of criticizing religion is obscene and condescending. Everyone can agree that trying to cut off an artist's head in response to being accused of having a violent temperament is, at the very least, ironic. The Danish cartoonists had the misfortune of being the first to very publicly point that irony out, but even at their most petulant and critical they still never hurt anyone. No one has ever died from hurt feelings.

As for the Holocaust, actually we can all make fun of it all we want, and we do.

Q: What's the difference between a pizza and a Jew?
A: A pizza doesn't scream when you put it in the oven.

If you think that's bad, in response to the Danish cartoons, the Iranian newspaper Hamshahri launched an international contest for cartoons mocking the Holocaust. But, unforeseen by the paper, it resulted in one of the most hilarious comebacks imaginable:

Amitai Sandy, the publisher of Tel-Aviv, Israel-based Dimona Comix, launched his own contest for anti-Semitic cartoons with the proclamation:

"We'll show the world we can do the best, sharpest, most offensive Jew-hating cartoons ever published! No Iranian will beat us on our home turf!"

A quick comparison of the two contests proves Sandy right. No one can out anti-Semite the Semites.

The apologists do have one well-intentioned point: Muslims, particularly Arab Muslims, have been egregiously misrepresented in the Western media. But in this instance, the reaction by the Danish papers to resist censorship has nothing to do with a "culture war."

The cartoon scandal isn't a clash between the Middle East and the West; it's the latest battle against religious fundamentalism and its desire to stamp out the expressions of artists and scientists. It's an offshoot of Gallileo versus the Vatican, Monty Python's Life of Brian versus the Anglican and Catholic Churches, Salman Rushdie versus Ayatollah Khomeini.

Islam is incidental. Any and all religious institutions must be opposed from influencing laws or stifling freedoms.

Maybe this is the reason, our national allergy to criticizing religion, which makes Americans so willing to let Europeans exercise our first-amendment rights for us.

Other readings: A very good article on the cartoon scandal by Rashmi Bansal.