I thought a lot about Harvey Milk this last weekend. It was gorgeous and sunny in Washington DC, and history was made as Congress passed into law the most monumental piece of social infrastructure legislation in over forty years. Health care is now a Right in America, and soon 31 million more Americans will have coverage, and never again will anyone be denied coverage due to becoming sick or having a pre-existing condition.

It was a beautiful moment of history making on this first Sunday in Spring. And yet it was impossible to be in DC and not also feel the dark underside of what is happening in this nation: Namely, a new movement that has shown itself to be born of hate; hate that doesn't seem to be too concerned about any particular actual piece of known and considered public policy. But rather a hate directed at those democratically elected who are Black or Latino or LGBT or who merely believe that health care is in fact a right. (To demand accountability be taken to stop this hate, click here.)

On Sunday I got a call to race over to the Capitol to conduct an interview and to document some of what was happening. I happened to be watching the debate from my home, and was wearing a well-worn "Legalize Gay" t-shirt. I joked about whether or not I should change my shirt before heading to the Hill, but several of my friends didn't find the joke very funny. A number of them had been on the Hill on Saturday and seen the hate. I was advised to not advertise myself as someone who supports LGBT rights, let alone as a lesbian, while walking alone through the crowd. They were not kidding, and I don't think they were being overly dramatic. At very least, I would have been targeted by an angry mob that would circle me, seeing another target at which they could direct their now recorded sentiments.

My first direct experience with Tea Partiers was on Capitol Hill a few months ago. They were there to protest health care reform, and I was there with a number of doctors and faith leaders, in support of health care reform. They yelled at us, they shoved us, they attempted to run in front of any camera the doctors were speaking to. It was a mob scene. Racist statements were made that the doctors I was there with, all coincidentally people of color, were either not real doctors, or were only allowed into medical school due to affirmative action.

It is not new to me to see what hate looks like. The hate of the Tea Party is not new to me. And yet the turn the Tea Party took this weekend still took me by surprise. On repeated occasion, the "n" word was yelled at African-American members of Congress, including at Representative John Lewis, who was beaten bloody while fighting for the Civil Rights Movement in the 60s. Representative Cleaver was spat upon. Representative Rodriguez was called a derogatory name directed at Mexicans. Representative Barney Frank was repeatedly called a faggot, and had to call Capitol Police as Tea Partiers refused to stop yelling and banging on his office door.

These are not isolated incidences. And the hateful crowd was urged on by Republican members of Congress, as this below video shows: 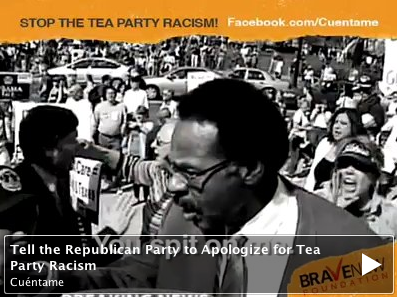 As if this all was not enough, five Democratic offices around the country have now had bricks thrown through their windows. And threats are being made to the lives of Democratic members who supported reform, and a threat has been made to kill the children of Democratic Congress members who voted for the bill.

There is nothing about this behavior that should at all be encouraged by a major political party. There is nothing in the history of this nation that allows for us to take lightly the trend of what is happening.

The thing about the hate we're seeing is that it is not so much new. We all know the history of hate in this nation - the KKK, neo-Nazis, and the history of violence against LGBT individuals. What is different now is that times have changes, and some of us who were previously denied power now have access to push for change in the form of democratically achieved legislation. Those who have always harbored hate against various groups now feel that there is less need to be covert about it. Now that people of color and a few LGBT individuals hold actual power in this nation, it appears that those who hate think it is okay to express racism, homophobia and general bigotry directly and violently to those in power. This hate now also extends to others who work alongside these groups in creating change.

We have seen this before. And we have seen the need to call it out, to document it and to not back down from our beliefs and our identities in the face of it. I owe many of the political opportunities I have to Harvey Milk and so many other leaders and everyday people who have walked through chanting halls of hate before. We have seen what happens when hate becomes commonplace in the public debate. I sincerely hope that we have learned enough from history that our collective nation, regardless of political affiliation, will not stand for such hate disguised as party-endorsed political action.

Those who oppose a diverse society, and who use progressive policy progress to channel that anger, can keep blogging home addresses of Democratic members of Congress, can keep throwing bricks, spitting, name-calling and threatening the deaths of children. We are not going away. We are going to continue to work in the democratic system to make American more just. But this is a crucial point for the nation to examine what is happening in the public debate. Who are we as a nation and how do we hold ourselves accountable to that ideal? There is hate out there right now, and it falls upon all of us to call it out for what it is, to disallow any political party to encourage it, and to do whatever we have in our power to stop this rising trend. It was a beautiful weekend this last week in DC. Light will win out over darkness. But history tells us it will not happen without all of us standing up and declaring enough.