Mississippi, a state that tends to be at the bottom of every index of states -- where bottom is not good -- has passed a misnamed Religious Freedom Restoration Act. Like most government legislation, the name has nothing to do with its actual intent. In effect, it says laws that treat religions neutrally are a burden to religion, and religion should have exemptions not granted to the rest of us. This also says no law can be applied against individuals acting on what they assert to be religious beliefs. 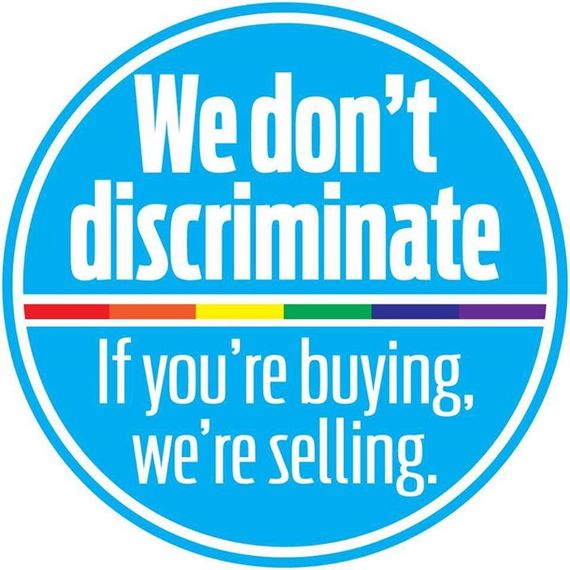 Of course the law passed, and the Republican governor signed it. Some of the most anti-gay bigots in the country were invited to a private signing. Business owners in the state decided to start a campaign where they place a sticker in their window that says: "We don't discriminate. If you're buying, we're selling." What an immensely capitalist thing to say! But, capitalism does tend to encourage social change and is anything but conservative in that sense.

Hundreds of businesses put the stickers in their windows.

Of course, that private businesses say they won't discriminate has fundamentalists in a dither. The American Family Association, at their OneNewsNow site, is very upset. Charlie Butts, appropriately named, reports AFA says this is "not really a buying campaign, but it's a bully campaign... carried out by radical homosexual activists who intend to trample the freedom of Christians to live according to the dictates of scripture."

Got that? Telling people your business will sell to anyone bullies Christians and indicates intent to "trample" on their freedom. Please remember this because this is the sort of thing the religious right means when speaking of gays bullying them. Capitalists, selling goods to anyone, is a bully tactic to them.

You should know that OneNewsNow is owned and run by the AFA, so when Mr. Butts tells you what AFA thinks, he's doing so directly from the AFA.

These were also the people who set this "news" service to change the word "gay" in all press releases to "homosexual." Hilarity followed when they printed headlines such as "Homosexual eases into 100 final Olympic trials. The original headline said "Gay," a reference to Tyson Gay, the athlete, who they referred to as "Tyson Homosexual." In another article they called basketball player Rudy Gay "Rudy Homosexual." That's literally how much they hate gay people! It's so extreme it's funny.

The AFA "news" site also asks readers "What's your main objection to the 'We don't discriminate' sticker campaign?" Your only choices are religious freedom equals discrimination, it "shows intimidation tactics by pro-homosexual forces," and it "incriminates businesses that don't display the sticker."

Let's look at this. Business owners seeking profit announce that they won't discriminate against customers. How radical!

Much to the dismay of religious conservatives and anti-market ideologues, capitalism undermines prejudice. As Henry Kamen wrote in The Rise of Toleration:

"The expansion of commercial capitalism, particularly in Europe's two principal maritime powers, Holland and England, was a powerful factor in the destruction of religious restrictions. Trade was usually a stronger argument than religion. Catholic Venice in the sixteenth century was reluctant to close its ports to the ships of the Lutheran Hanseatic traders. The English wool interest spent the first half of the seventeenth century in energetic opposition to the anti-Spanish policy of the government. By the Restoration in 1660 it was widely held that trade knows no religious barriers; the important corollary that followed from this was that the abolition of religious barriers would promote trade."

In his Political Arithmetic, written in 1670 but published years later, Sir William Petty said "for the advancement of trade... indulgence must be granted in matters of opinion." Even opponents of trade recognized this as true, and used it to oppose trade. Samuel Parker's A Discourse on Ecclesiastical Politie [1669], said "tis notorious that there is not any sort of people so inclinable to seditious practices as the trading part of a nation." The chaplain to the Earl of Berkeley warned, "that the great outcry for liberty of trade is near of kin to that of liberty of conscience."

Of course, bigots in Mississippi are still free to discriminate, but they do at a disadvantage to competitors who don't. Profit-seeking businesses were willing to serve the LGBT community long before politicians found it expedient to do so. It is no accident that major businesses in virtually every state recognize gay relationships of their employees, while most states, counties and cities do not. Profit is a great motivator for tolerance.