To swipe, or not to swipe? - Hamlet, if he were alive today. 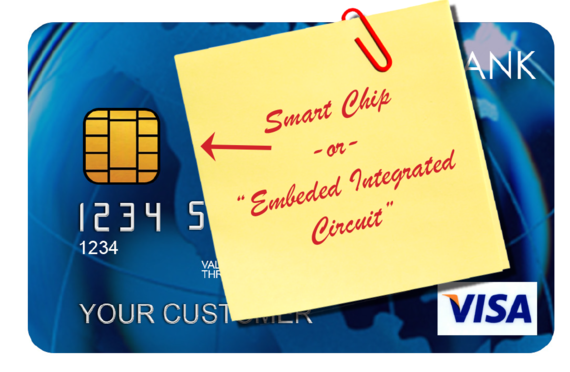 Why does it always seem that, when talking about technology, in order to take one step forward, we must first take two big ones back?

Ever since the credit card companies introduced these new "chips" that supposedly do a much better job of protecting us from fraud and identity theft, it seems the time it takes to process a simple supermarket transaction has increased, tenfold.

I'm referring to the little gold square at the bottom of every new credit card sent out in 2015. The chip was designed to do away the need to "swipe," as this is how most would be thieves in today's black market go about stealing your info.

Given the myriad of ways we transmit sensitive financial data these days, it's no surprise identity theft claims almost 20 million victims a year. Beyond that, the laws protecting us from it are in desperate need of revision, as it seems these types of criminals are usually back at it within days of being arrested. And, we're not talking about petty theft, here, either. In 2014, Credit card fraud cost retailers upwards of $32 billion, up from $23 billion the previous year. And guess who foots the bill for that?

So, yes, any new technology that could potentially put a dent in those numbers is a welcome sight. However, at the moment, the chips appear to be causing quite a bit of tension for us consumers on the checkout lines.

Upon posing the question of the chip to my legions of Facebook followers, I was immediately inundated with dozens of responses from friends who are just as frustrated by having to stand on line waiting up to ten seconds longer for the machine to tell you to remove the card. You may not think ten seconds is a lot, but try sitting that long at a traffic light and see what happens. You'll be lucky to make it home alive.

And, it's not just the actual transaction that takes longer. Since the introduction of this blazing, new technology, no one's really sure what to do when you get to the checkout counter - not the customer, nor, it seems, the cashier, so that obviously adds to the already unavoidable delay.

At the moment, it's rare that you get an employee who's on the ball and immediately tells you to insert your card; rather, most of us still go through the futile motion of swiping about a half-dozen times before the cashier realizes what we're doing and says, "Oh, yeah. If you have a chip you need to insert the card in the slot below." Then, while it's processing, we stand around checking our emails - because God forbid we let five seconds go by without looking at our phones - before realizing the incessant beeping sound we're hearing is the machine saying "You can take your freaking card out now, idiot!" Beyond that, some machines that are equipped to handle the chips, don't yet. It all depends on which company you're dealing with.

For their part, reps for both Mastercard and Visa say the chip is working wonders when it comes to stopping identity theft. Beth Kitchener, Mastercards' U.S. spokesperson says identity theft is down almost 25% since the induction of the chip, and there hasn't been a single case of fraud attributed to hacking a chip (yet). Visa has already addressed the problem of slower transaction time, but, while the solution to the problem is apparently here, it must first be adopted by all merchants before being implemented. I wouldn't hold my breath.

Meantime, try and look at it this way; remember the days of "dial-up," when it took a half an hour just to download a simple jpeg? Well, this new technology, while a giant leap forward, is still in its dial-up phase.

And given the above, it seems like it may have been a better idea to wait until all machines across the country were optimized to handle this new technology, and the speed problem addressed, before rolling it out in such a haphazard fashion?

But, the obvious flip side to that coin is that the chip is already having a major impact on stopping hackers from gaining access to your information. So, perhaps we can remember that when the little old lady in front of us takes a half hour to pay for her groceries? Or not.