As individuals, you could not paint the members of the so-called Tea Party Movement with a broad brush, nor would you want to. As a journalist, I traveled from Arizona to Massachusetts, talking to the rank-and-file of the right-wing backlash against the Obama presidency in order to understand what was driving this angry and at times logic-impaired insurgency. And on that human level, the common denominator I found time and time again was fear -- whether it was folks whose jobs vanished when they were in their late 40s and early 50s who turned to Glenn Beck or a group like the Oath Keepers to figure out who to blame, or people seeking an outlet for their "discomfort" over a rapidly changing America that had so suddenly placed a black man with an unorthodox life story in the Oval Office. But in a group setting, raw fear can get masked by bravado crossing the line into hate.

And so you end up with the ugliest thing that I came across in my reporting, this portrait of hatred in black and white that was openly sold and circulated widely at the Knob Creek Machine Gun Shoot in West Point, Kentucky, on a Saturday night back in October of 2009. 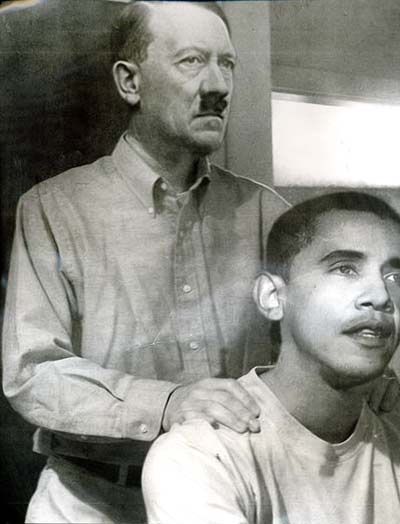 I first saw it at a booth run by two guys called The Bazooka Brothers. Here's how I describe in my book, The Backlash: Right-Wing Radicals, High-Def Hucksters and Paranoid Politics in the Age of Obama:

At a long table, underneath a relic of the famous World War II rocket launcher, the two guys from Kokomo, Ind., are also selling a rapid-fire variant of lower part of the AR-15 semi-automatic assault rifle, a type of firepower component that was outlawed in America for a decade before then-President George W. Bush and a Republican-controlled Congress allowed the assault-weapon ban to expire in 2004. And at the front counter, it is just two dollars for this black-and-white glossy Photoshop job depicting Obama in an adolescent guise, in a plain white T-shirt, upright in a kitchen chair, while with his hands on our future president, in a soft parental pose, is the casually dressed Nazi Fuhrer.

"I've sold a stack of them -- they did a good job," one of the Bazooka Brothers (okay, not really brothers), Brian Kitts, says, gradually warming up to the topic. He says he doesn't know who produced the Obama-Hitler Photoshop and was vague as how exactly he came to be selling it alongside a card of the now semi-famous poster of Obama as The Joker, over the word "Socialism" -- ironically, the very same image that the finance chief of the Republican National Committee would use just six months later in a presentation on using fear to raise campaign cash.

Why does he think the Nazi comparison is valid?

"At the very core, he's un-American," the gun merchant says of Obama. "The rest of the world sees him as weak and that's going to bite us in the ass." Kitts says he's been selling his brand of heavy firepower at Knob Creek for more than two decades, and -- despite nary a word from Obama in support of gun control in the initial months of his presidency -- he doesn't think it's far-fetched that his government would someday come knocking for people's weapons.

"There will have to be an emergency, or to compare it to Germany, a Reichstag event," Kitts continues, referring to the 1933 blaze at the German Parliament that Hitler blamed on Communists and used as an excuse to suspend civil liberties and consolidate power. "So here's a problem...we've got to declare martial law and suspend the Constitution indefinitely...Will that happen? I don't know. It's possible. That's what a lot of people are afraid of. A lot of people here are really into military history, and history can repeat itself." As he speaks, a man who looks to be in his eighties strolls by, grins at the Obama-Hitler picture and makes a disparaging remark about the president winning the Nobel Peace Prize, which had been announced the day before.

"You know damn well what he did to get it," the man mutters. "Look around. What's the majority here, and what's the minority."

One thing that "Bazooka Brother" Brian Kitts told me certainly rang true, which was that the gun aficionados of Knob Creek were big-time history buffs, especially when it came to World War II. In the massive tent of vendors, it was hard to round a corner without hearing a Hitler diatribe blaring from a war-history DVD for sale or see some kind of relic like a rocket shell from the iconic war. It all played into a grand historical narrative that had nothing to do with the complex forces dragging down middle-class America -- things like globalization and the complete outsourcing of once thriving manufacturing sectors. A number of people I met in Kentucky that weekend drove down from Wisconsin's Paper Valley, where a string of plants making plastics for small appliances vanished in favor of factories in China in just a few short years.

The idea that a man like Barack Obama -- who in his look and his background and style was so alien to their core culture, totally regardless of his actual policies -- wanted to take their guns away just made sense to them on a gut level that defied logic, just like the notion that hard times, along with uncomfortable-for-some changes in an increasingly multicultural America, were not the result of sweeping social forces but a guy in the Oval Office who is modeling his rule after Hitler. It all makes no sense, but it also is not new -- in 1963, historian Richard Hofstadter wrote of "the paranoid style in American politics" and said of fringe groups most threatened by change that "[t]he paranoid spokesman sees the fate of conspiracy in apocalyptic terms -- he traffics in the birth and death of whole worlds..."

In a place like Knob Creek, a hateful picture like the one at top becomes a tribal statement, showing solidarity and "us against them" in the most outrageous way possible. By the time that the sun set on Knob Creek in anticipation of the explosive Night Shoot of fiery explosions illuminated by round after round of bright-hued tracers, I saw a number of people carrying around the Obama-Hitler picture and merchants taping it to their stalls -- an insane comparison that has bled into a growing corner of our sometimes warped national dialogue, giving life to other conspiracy theories like the notion that Obama is a secret Muslim or not an American citizen.

It's going to take years, at best, to unravel the things that have caused so much anger and confusion for some elements of the country's battered middle class and the others who are now fearful, over economics or other issues. But it only takes a few seconds on a computer to create a simplistic and indelible image of hatred in black and white -- and that is a very hard thing to overcome indeed.