These good Samaritans are working to make sure that the homeless and others in need are prepared for the winter weather.

Hats and scarves have been spotted around several areas that are experiencing frigid temperatures this winter. The apparel -- which has shown up in cities including Edmonton and Winnipeg in Canada, and Wilmington, North Carolina -- comes with messages urging those in need to take the winter wear. 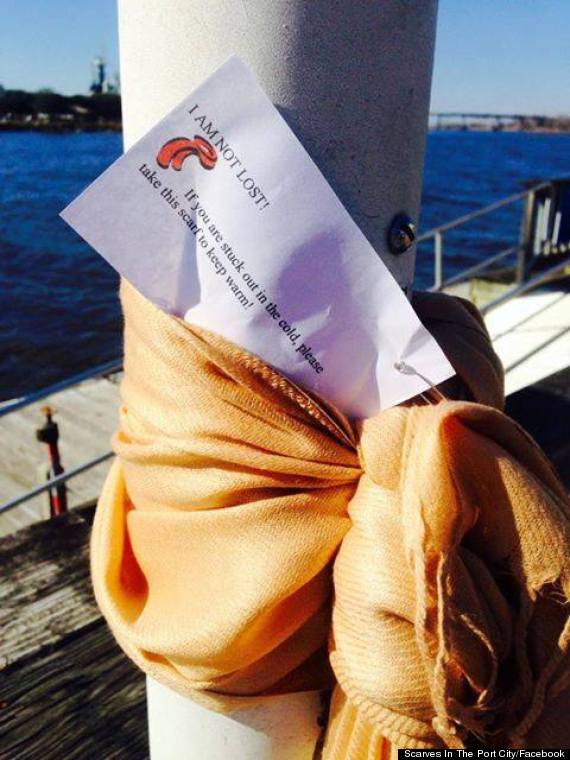 "I am not lost!" a message attached to a scarf in Wilmington reads. "If you are stuck out in the cold, please take this to keep warm!"

The group responsible for that particular item, Scarves in the Port City, says that their aim is to account for those who need a helping hand during the winter months in a simple and effective way.

"We collect and distribute scarves for the homeless during inclement weather," the group, whose representative told The Huffington Post that they've distributed hundreds of scarves, wrote on their Facebook page. "We hope to help create awareness of the difference kindness can make to people's attitudes, feelings and actions towards themselves and others when it's embraced as a way of life."

Another group involved, Chase the Chill, is dedicated to keeping the homeless warm throughout the winter by "yarn-bombing," i.e. leaving colorful knitted or crocheted creations around cities, for the taking, according to their Facebook page. While the group started in Pennsylvania, the idea has traveled to cities across North America. Their work, one member says, makes warm clothing readily available for those in need.

"It gets right to the people who want it," Wendy Grahl, a member of "Chase the Chill" in Edmonton which distributed about 250 scarves last year, told Metro News. "If you’re homeless and it’s 30 below a scarf is going to be welcome."

The do-gooders, who often place the clothing in locations that are easily accessible for people in need, like libraries where people may seek refuge from the chill or homeless shelters, say they hope their efforts can provide some much-needed comfort to those who need it most over the winter months.