People pay good money to be scared in a haunted house, but what customers do to the employees who spook them can be even more frightening.

According to former and current professionals in the haunted house industry, it's common for customers to freak out from fear and bust noses, bite arms and throw punches at the people they've paid to scare them.

"It's common, absolutely," said Allen Hopps, who trains actors to work in haunted houses. "The problem isn't the haunted houses or the actors, but the customers. They forget that people are actors and have a flight-or-fight reaction towards the person scaring them, not realizing one might be a 16-year-old girl."

Hopps says that busted noses are the most common customer-inflicted injuries.

"Someone might throw a punch when they get scared or if someone scares them from behind, they will raise the elbow quickly," he said.

Other injuries that are common include "haunted house throat" from excessive screaming and "cleaver elbow," a repetitive stress injury similar to tennis elbow that comes from raising your arm too many times a night.

"You can also get muscle burns using a chainsaw," Hopps said. "It happens in the line of duty, but haunted house acting is a sport. If you twist an ankle, you can still work in the graveyard as a zombie."

Edward Terebus, who owns a haunted house in Pontiac, Mich., is another pro who looks at the injury risk as part of the cost of doing business.

He once had a customer who was so scared by the house that she passed out three times inside before he was able to get her out so she could be treated by paramedics.

After the last fainting spell, she got up and headed to her car. Since she was still at risk of fainting, Terebus tried to prevent an accident by pulling the key out of the ignition.

"This woman grabs my arm like a chicken leg and takes a big bite out of my arm," he laughed. "I'm screaming, she's screaming and for an ironic twist, the fire department ended up holding me longer than her, tending to my bite wound."

Not everybody gets the same thrill that Hopps does from risking injury in order to scare up money.

Lynnette Kittle, a publicist for Random House who lives in Colorado, is still haunted by her experience as a teenager when she volunteered to work in a haunted house.

"I thought they wanted me to take tickets but they asked me to lay in a casket and pop up and scare people," she told HuffPost Weird News. "It was too much for one teenage girl. When I sat up, she screamed in terror and started punching me in the stomach! Three guys behind the moveable wall in the room where I was stationed soon caught on and started to push her and her friends to the next room.

"Needless to say, I asked to be moved to another spot after that experience!"

PHOTOS: WHAT KIND OF PERSON RUNS A HAUNTED HOUSE (Story continues below)

PHOTO GALLERY
What Kind Of Person Runs A Haunted House?

Not all customer-inflicted injuries happen to humans, according to Amber Arnett Bequeaith, who runs the Edge Of Hell in Kansas City. One attraction at the house of horrors is an actor known as the "Rat Man," who pretends to eat rats and offers each guest a bite.

"One woman was so freaked out that she smacked the rat out of his hand and it flew out across the room and hit a brick wall where it died," she said.

Wendy Zdrodowski, a former haunted house employee in Chicago, said the customers are scarier than anything she did to frighten them.

Zdrodowski, who now performs at Renaissance faires, says most employees are independent contractors and, therefore, responsible for their own injuries.

"There are people who target performers, such as bored kids who will throw pennies at the performers -- those hurt, by the way," she said. "I was told not to warn new employees because they said it was bad for morale. It got so bad I brought my own security."

There is some hope, she says. Some houses are beefing up security and using metal detectors, but she recommends any would-be haunted house performers ask questions about what they do to stress employee safety.

Some former haunted house employees say the job actually helped them physically, like Erica Holloway, who worked in a haunted house in Flint, Mich., while taking vocal lessons.

"I had to do this blood curdling scream 30 times a night over and over," said Holloway, who now works in public relations in San Diego. "My voice would be dead by Halloween, but, as a side effect, it ended up improving my range."

Hopps trains his spooky students to watch out for potential dangers.

"How you scare someone five feet away is different than 15 feet away," he said. "You can go 'bigger' when you're further away. If someone looks mortified, back off, because they're not having any fun."

But even so, he admits accidents happen.

"I know one actress who scared a guy and he forced his way through a back door so he could hit her in the face," Hopps said. "Even so, she came back the next year."

The thrill of scaring customers outweighs the occupational hazards, he said.

"A lion never feels more alive than when chasing an antelope," he explained. 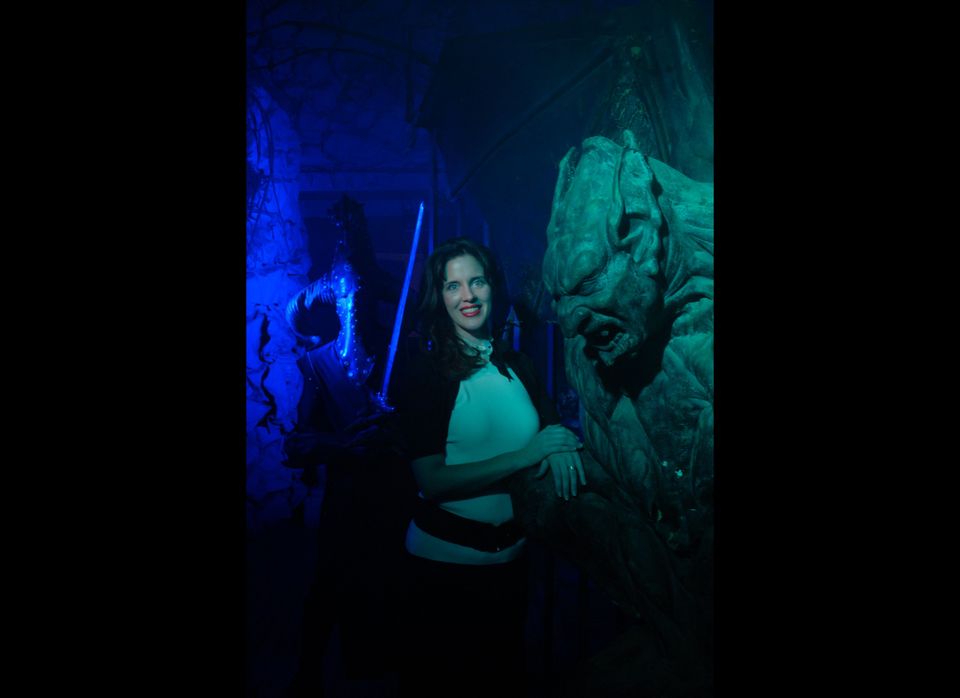 1 / 7
What Kind Of Person Runs A Haunted House?
Courtesy: EdgeOfHell.com