We're all haunted by something, whether that be the ghosts of the past, skeletons in the closet or Patrick Swayze. And sometimes, your pizza and tacos are haunted, too. This article is about those times.

*Obviously, these probably aren't real and the evidence is all hearsay. But hey, that never ruined a good ghost story...

When this Pizza Hut location was, according to legend, occupied by a Jack in the Box, someone apparently died in the bathroom. The bathrooms are now haunted and supposedly you'll hear whispers and feel cold spots, which presumably make hot summer hauntings especially refreshing. The staff members have allegedly witnessed pots and pans falling mysteriously as well. Members of the Long Island Paranormal Investigators videotaped both the men's and women's bathrooms, but only "filmed a spirit" in the women's bathroom. It takes quite a bit of squinting to see a spirit in their video, but that's their claim. Google Maps says that the location is closed, but HuffPost successfully got a Pizza Hut employee on the phone when calling their delivery line. That said, HuffPost may have been talking to a HuffGhost.

Glendale, Arizona may also have a haunted Pizza Hut. The spirits of infant children and babies supposedly haunt the place, causing people to hear crying and see faucets turning on and off inexplicably. Of course, crying children and faulty faucets don't really seem that strange for a Pizza Hut.

The story goes that the building used to be a Harley Davidson shop owned by a Mr. & Mrs. Forbes. On the night of April 13, 1984 -- Friday the 13th (of course) -- the Forbes couple was out driving when a carload of young men driving over 100 mph crashed into the Forbes' car, killing everyone involved. Now Mrs. Forbes haunts the Subway, throwing items off shelves, setting the beepers off on the doors, cutting sandwiches, calling out the employees' names and appearing at the cash register to give dirty looks. It is also said that she causes an extremely foul stench, but that could just be the iconic "Subway smell."

Supposedly, a woman was killed in the elevator of this Walmart and now mostly haunts the third floor, though people have said they've seen her all over the store. Sometimes, stocked merchandise will mysteriously fall over, which is said to be caused by the ghost, but might just be teens messing with Walmart.

There also may be another haunted Walmart in California. The spirit of a young Mexican girl is said to haunt the Oxnard location. 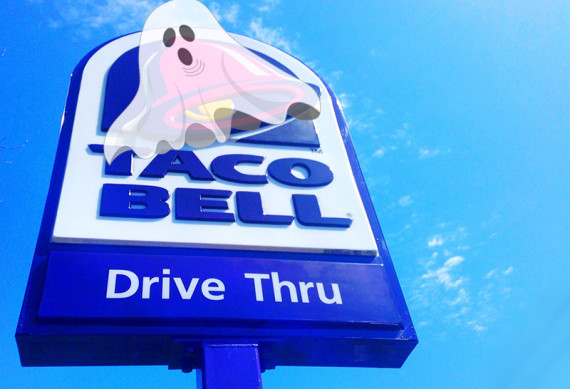 Three ghosts have been spotted by employees -- a young girl wearing white, a military veteran and a woodsman. There may even be a fourth ghost -- a teenage boy with an old Taco Bell uniform who will help the other employees with their tasks. It is unclear whether the ghosts are friends, or if their occupational diversity leaves them with little to talk about.

A janitor who used to work at this Burger King claims he chased a young man around the restaurant twice, only to have the young person disappear before his eyes both times. The janitor then quit out of fear. If you come at the ghost of Burger King, you best not miss.

A poltergeist of some sort allegedly haunts the cash register in lane number two, according a cashier often assigned to that lane. According to her, the cash register hates her and won't work until her supervisor hits "the buttons in the very same sequence." The cashier also said the poltergeist is male and that, "He monkeys with all the sales." A customer told her, "it's little men in there that like to play with you." The store manager said the machine is 15 years old and the employees want to smash it. I have a computer that's a few years old and must be in the initial stages of getting haunted by a poltergeist -- probably about time for an upgrade.

This McDonald's may have previously been a gas station, which was supposedly the site of multiple tragedies. According to legend, a mother accidentally ran over her child in the 1960s and a car mechanic was crushed by a vehicle when a lift malfunctioned. The mechanic was reportedly supposed to be charged by police for the earlier murder of his own child, who had gone missing years prior. Lots of loose ends in this one! The employees have heard strange noises and the toilets have flushed inexplicably. A McDonald's bathroom toilet not working properly is so rare! The walk-in cooler may have also been turned off at night from the inside on multiple occasions, presumably causing many frozen McNuggets to become ghost McNuggets.

Sometime in 1996 or 1997, the manager of this Arby's was shot in the parking lot by an employee she had just fired. Now the ghost of the manager shows up at the restaurant to help out -- making sure things are in their right place, moving chairs and jabbing employees for being lazy. Late at night, you may be able to hear the altercation taking place in the parking lot, or during the day hear her whispers. Or you may not hear a thing.

This Toys R Us is famously haunted by a friendly ghost named Johnson who in the 1880s used to work on the family farm that the store is now built on. Apparently, Johnson bled to death on the farm and now haunts the location -- moving toys, calling names, following female employees into the bathroom, talking during seances and other inexplicable behavior. Besides the bathroom thing, Johnson just seems like a cool ghost who's lucky that a toy store got built atop the place he gruesomely died. This ghost story was even narrated by Leonard Nimoy for an episode of "Haunted Lives: True Ghost Stories."

For over a decade, employees, delivery people and contractors have witnessed a "phantom employee" at this Kentacohut. Nobody is thought to have been killed at the location, but for some reason, the same mysterious employee keeps showing up at the store, only to vanish quickly after being seen. Unfortunately, the Pizza Hut was actually taken out of this location -- meaning you may now be haunted by a phantom pizza as well.