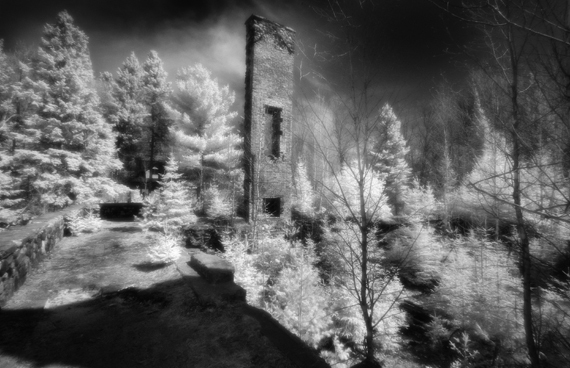 Summerwind mansion has always been steeped in legend and mystery and I had experienced its strangeness myself during a spring visit to explore the ruins. This was rare for me because I usually don't stay at a place long enough to experience anything or capture anything unusual with my camera. Over the years many visitors to the site have reported unease about the property even if they had never experienced any ghostly activity themselves.

In 1916 US Secretary of Commerce Robert Lamont who served under the Herbert Hoover administration built Summerwind for himself and his family on the shores of West Bay Lake in northeast Wisconsin, the mansion was an escape from the pressures of political life in Washington D.C. during the summer months. The original structure, a fishing lodge, was purchased by Lamont, who employed Chicago architects to remodel the property and convert it into a mansion.

During his 15 years at the mansion Lamont believed the structure was haunted. Lamont suddenly abandoned the mansion in the mid-1930s after one particularly frightening evening. He and his wife had just settled down to an evening meal in the kitchen, when the door to the basement shook itself open and a ghostly form of a man appeared. Lamont grabbed a pistol and fired two shots at the apparition as door swung shut. Holes in the basement door could still be seen many years later after the home came under new ownership.

From the 1940s to the 60s the house was owned by the Keefer family but remained largely unoccupied. When Mr. Keefer died his widow subdivided the land and sold it to purchasers but they experienced financial difficulties in keeping up payments.

When Arnold and Ginger Hinshaw and family moved to the house in the early 1970s many strange occurrences began to unfold and much of the haunting seemed to take place during this time. Shadows would be seen moving down the hallways, whispers would be heard but then stop when the Hinshaws entered the room, unexplained electrical and mechanical problems often occurred at the home, windows and doors would open and close by themselves. One window raised and lowered so often at all hours that Arnold nailed it shut. An apparition of a woman would appear near the dining room.

During this time the Hinshaws tried to renovate their historic home but had trouble keeping workers because Summerwind gained a reputation for being haunted. Workers would not show up for work, usually claiming illness, a few of them simply outright refused to work. The Hinshaws decided to do the work themselves. During the renovation, Arnold was painting a closet in one of the bedrooms and removed a shoe drawer from a closet. He discovered a hidden dark space behind it. When Arnold investigated the space he thought he saw the remains of an animal. The entrance to this space was too small for him to fit into so he sent his daughter Mary with a flashlight to investigate. Moments later Mary let out a scream and claimed discovering a human skull and strands of black hair. For some reason no report was made to the police. The body mysteriously vanished when Ginger's father and brother investigated the space many years later. The discovery of the corpse marked a turning point for the family. Arnold began display strange behavior, staying up late at night playing their Hammond organ that they purchased before moving into the house. The music became a strange mixture of senseless melodies which grew louder during the night. Ginger pleaded for him to stop but Arnold claimed the demons in his head demanded that he continue to play. He often played the bizarre music until dawn as his frightened wife and children took refuge in one of the bedrooms. Six months after moving into the house, Arnold suffered a breakdown and Ginger attempted suicide. Ginger shortly moved out of the house leaving Arnold and never seeing him again.

Several years later Ginger's father, Raymond Von Bober, bought Summerwind disregarding Ginger's pleas to leave the house alone. But with all of Von Bober's attempts to renovate the house suffered the same problems as the Hinshaws' years before. Von Bober's son Karl experienced a variety of unnerving events. While walking through a hallway he heard a voice call his name, but he was the only one in the house. Then he heard what heard what sounded like two pistol shots and ran into the kitchen to find the room filled with smoke and the smell of gunpowder, an apparent supernatural reenactment from the 1930s Lamont incident.

During Von Bober's renovations workmen also began to report uneasiness as tools began to disappear. Furnishings appeared in photographs, which had not been existence since the original owners had possession of the home. Room dimensions appeared to change in these photographs and as draftspeople tried to produce blueprints of rooms. 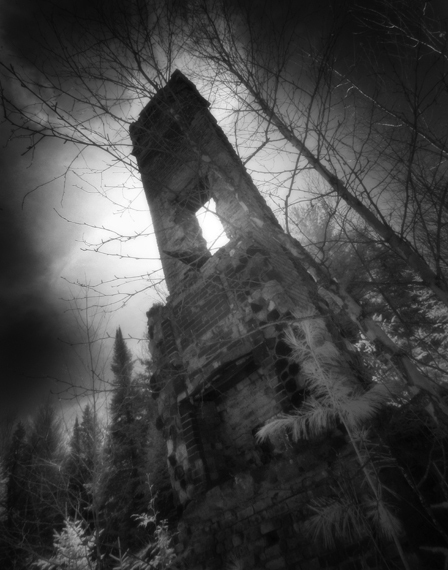 By the 1980s the mansion was abandoned for good. People visiting during this time reported seeing objects flying around, disappearing and reappearing, and photographs would have odd shadows in them. Some experienced seeing the mansion as it would have appeared in earlier times.
In June 1988 the mansion was struck by lightning and burned to the ground. All that survived was the house's chimney stacks, foundations, and stone staircase.

On my first trip to explore the house I never could find it, despite being within several yards of the ruin. A few days later after further research I decided to try again. This time I finally found it and noticed the chimneys which stood like tombstones against the sky. A dull buzzing sound of a large group flies in the heart of the mansion grounds added an unsettling noise to the eerie atmosphere. As I walked around the ruin among the weeds and wild growing trees, I felt unease as if I was being watched.

Being intrigued by exploring these haunted places it's sometimes hard to imagine the tragedy that happened to those who lived there and what they went through so long ago. I found myself thinking, what was so bad that happened here to make a family leave this beautiful house. Then I thought, maybe that's how evil works, it tricks you into thinking nothing is bad as it looks, till you let your guard down. 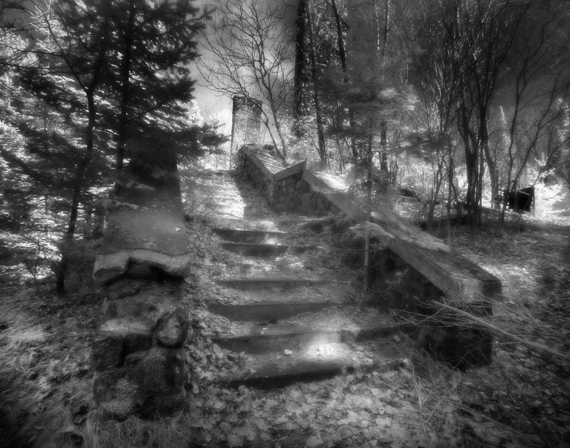 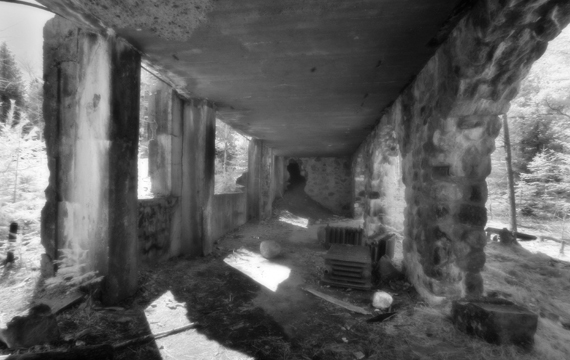 Feel free to check out my fan page on Facebook: https://www.facebook.com/phantasmagoriaphoto