One of my favorite pictures in the six-year album of parenting is of my son catching a ball during a game. It's a close up, over the right shoulder, shot by a friend with a zoom lens: his hat is popped up, the ball is descending between his outstretched glove and his other hand, and his face is turning even though his eyes are locked on the ball.

Doesn't matter that he probably didn't catch it. It's noteworthy, not just because it wasn't taken with a camera phone, but because of the complexity captured in the moment: the catch, as a iconic slice of Americana, is a rite of passage, a small but significant milestone in his physical development. 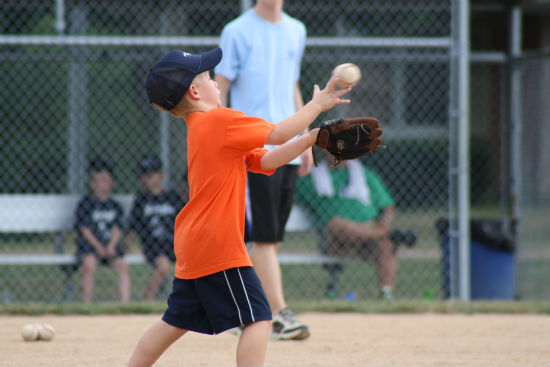 To catch is the evolution of six or seven years of motor skills and hand-eye coordination. By 6-8 years old, according to the CDC, children should "catch a ball more easily using only their hands." It is an incredibly complex act that we, as old hands, take for granted. When objects are hurtling at you, the instinct is to duck, dodge and evade -- the flight response. In a game of catch, we are teaching our kids the fight response: to face it.

Catching a ball is a microburst of several coordinated and instantaneous actions: address this object about to strike you; reach out your arms, at first to protect your face, then to prepare to stop it; visually slow the ball down by eliminating everything else in focus; set your hands in the perfect spot of the ball's trajectory; collapse, soften, and retract your hands simultaneously and instantaneously on contact.

It's even more nuanced than that, which is why it takes years for us to become adept at catching balls of various sizes at various speeds. Developing and acquiring this skill is not to groom little baseball players: it is an essential developmental skill that every child should possess. "If children do not learn to throw, catch, jump and kick when they are young they will not possess the skills needed to participate in physical activities as adults," thus decreasing the likelihood of adult physical activity, Dr. Steve Sanders wrote in The Importance of Developing Fundamental Motor Skills.

There's also the more immediate need for a child to develop a competency in catching. Starting in first grade, the child who is still afraid of the ball begins to feel marginalized. The fastest boy on my son's basketball team would turn away or otherwise protect himself when the ball was passed to him. No one was doing much passing anyway, but he didn't go after the ball and it didn't come to him; he got disengaged and stopped playing, opting for athletics that didn't require balls.

There is nothing wrong with that, of course, but if the aversion persists his options will be limited, especially given his predisposition to athleticism. Though sports are one of the most expedient ways to teach a whole lot of lessons, they are not vital: physical activity is. And one way to get that is through games, which are far more fun to engage in than say, running.

Most of us aren't out to make our kids athletes but we can take a big part in bolstering their self-esteem. There are few things that illuminate a child's sense of accomplishment as when they first catch a ball. This is most obvious with toddlers.

One game our babies loved, once they were able to sit and move, was rolling a ball across the floor to them. You sit with your legs open, they mirror you, and you roll the ball to them; they trap it and try to roll it back. Increase the distance as they develop. You can vary it by bouncing a ball to them.

This is still a game we play now; we stand next to each other and drop the ball in each other's gloves or hands. If we each catch it, we take one step back, increasing the distance until the ball is dropped.

A great way to get over the fear of catching, for both the parent worried about the shiner and the child worried about why someone is throwing things at her, is starting off with a balloon. C'mon, balloons are fun at any age. We've turned our front room into an indoor volleyball court with some dying birthday balloons.

The act of learning how to catch is not just the application of hand-eye coordination: it requires timing, courage, and maybe, more than anything, trust. Trust in themselves to do it, but firstly trust from the person who is throwing it. It should be us.

More by Robert Duffer on The Good Men Project:

Why Won't My Wife Turn Off the Lights?

AirPods And Pros Are On Sale At Target And Walmart

31 Scarily Relatable Tweets That Sum Up Halloween For Parents

Layerable Shirts For Men To Stay Cool And Cozy This Fall