My mother always says "traveling makes you smarter." Travel broadens the mind, and the heart. I think everyone has had the experience of being in a foreign country (or even county) and making a human connection that deepened how they view the people who live there. Empathy arises only when you stop seeing someone as "other" and are able to imagine how it would feel if you or a beloved family member were in their shoes -- like the heartbreakingly familiar looking black tennis shoes of a drowned little Syrian boy, for example. 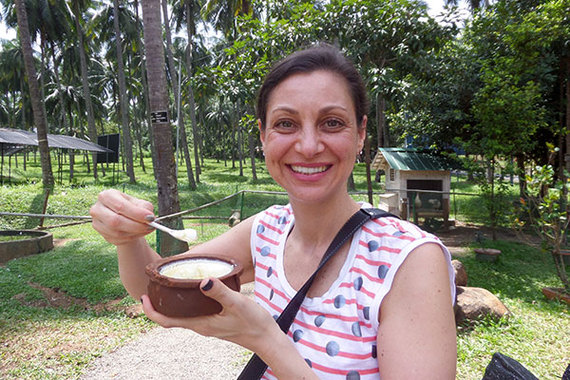 I spent time in Nepal as a child, and I've been fortunate to be able to travel all over the world as an adult. Because I work in the food industry -- and also because I love to eat street food (that's me at right, enjoying a bowl of buffalo-milk curds with treacle) -- I tend to seek out the people who are involved in producing food wherever I go. I visited a shrimp processor in Vietnam and watched armies of men and women, covered up from head to toe, stand in refrigerated room after refrigerated room sorting, steaming, peeling, and breading shrimp. I chatted with Peruvians about the more than 4,000 colorful kinds of potatoes grown there as well as many, many types of corn and the current double-edged sword of the growing worldwide demand for quinoa. 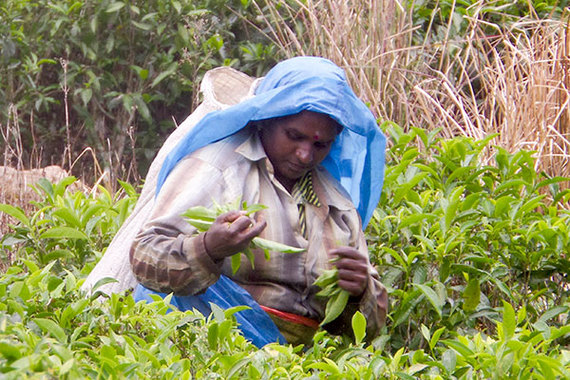 The best cases are when I see something that I can actually do something about. Last February I visited Sri Lanka, where, when hiking in the Knuckles mountain range, I passed through a series of tea plantations. Now, I'm a tea drinker, and I consider myself pretty aware about where my food comes from. But somehow, the connection between those fragrant dried leaves I dunk in hot water daily and impoverished, hardworking women halfway around the globe had remained theoretical to me, not something I felt compelled to do anything about. That is, until I saw the workers with my own eyes, picking leaves by hand and trudging great distances with huge cloth bundles on their heads. 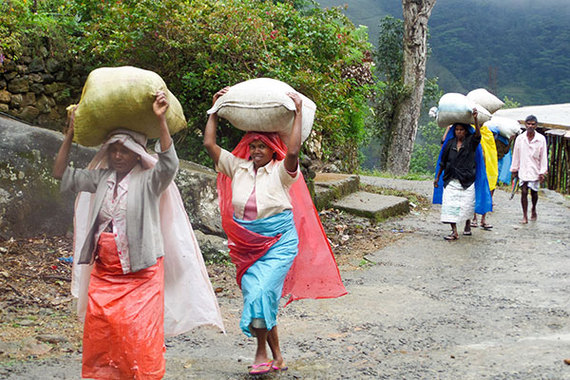 My trekking guide told me that the tea pickers -- who are almost all women in Sri Lanka, as they are in the other major tea producers China, India, and Kenya, too -- make around 600 rupees a day for harvesting 20 kilos of tea, plus a bonus of 25 rupees for each additional kilo. When I was there, the exchange rate was 133 rupees to the dollar, so we're talking less than $5 a day, and they work rain or shine.

He told me the pickers are Tamils, people originally from India brought in because the Sri Lankan people "wouldn't do the work." As someone who's well acquainted with how the U.S. treats its immigrant farmworkers, that set off alarm bells for me. And indeed, I learned later, workers on both tea plantations and small farms often face sexual harassment and other human-rights abuses, cripplingly low wages, and health issues caused by the backbreaking work of picking and pesticide exposure.

I was heartened when I visited the Kandy offices of Bio Foods, a Fair Trade Certified tea and spice company (yes, this was a vacation...I sure know how to relax and have fun), and heard about all the great projects they're supporting in their community in addition to paying the Fair Trade premium. I happen to be in charge of purchasing for a billion-dollar food service company, one that tries to source ethically and responsibly. I wondered: How hard would it be for us to switch our tea purchases to a Fair Trade Certified source?

Not that hard, it turns out, just expensive. While the actual increase per cup for us is only a few pennies, that 37 percent premium across our cafés nationwide adds up. But we're making it work. On October 1, 2015, in honor of Fair Trade Month, we're announcing that we're switching all the tea we serve our guests -- including single-serve brewed and bulk-brewed (hot and cold) -- to Fair Trade Certified tea from Numi.* (Note: in case you're wondering, Bio Foods doesn't export to the U.S. market, or else I would've tried to buy from them.)

Here's why. Fair Trade offers producers stable prices, a Fair Trade premium (paid on top of the agreed Fair Trade price, the premium is used to invest in local communities, often going towards education, healthcare, or farm improvements) and empowers farmers and workers (committees comprising men and women democratically decide how their premium is used). It also sets standards for safe working conditions, sustainable wages, and rewards and encourages farming and production practices that are more environmentally sustainable.

For example, thanks to Fair Trade funds, the 500 workers of Numi's Berry Black and Breakfast Blend tea supplier Chamong Tea Estate have helped raise the overall income and standard of living for the local population in the foothills of the Himalayas in Darjeeling, India. They've purchased cows as an additional source of food and income, paid for training and tools for other projects, and improved maternity benefits.

I might be imagining it, but there is less of a bitter aftertaste when I drink my cup of a tea now. Won't you join me in seeking out the Fair Trade logo for your tea or coffee?

*The only exceptions to this policy are where it conflicts with requirements from our nationally branded concept partners, and the tea we source through enrolled Farm to Fork vendors.