The global bond markets are in a tizzy again.  Since mid-April, the yield on the 10-year Treasury bond has increased by 0.59% to 2.46% while the yield on the 10-year German bund has increased an even greater 0.91% to 0.98%.  The action in the fixed-income world has been dramatic but orderly, but that doesn't mean there hasn't been a lot of pain to go around.  Anyone betting that central banks would be unable to stem the tide of global deflation has been wrong so far.  But avoiding deflation and entering a new phase of stronger economic growth are two very different outcomes.  The former can be comfortably assumed, but the latter is still far from certain. 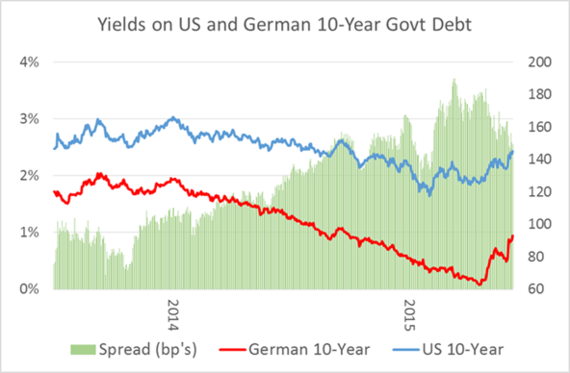 One of the primary reasons that rates have been trending higher has been the improvement in the US labor market.  The Labor Department said on Friday that the improvement continued in May with the economy adding 280,000 new jobs for the month - well ahead of the consensus estimate of 226,000 and a solid improvement compared to both March (+119K) and April (+221K).  Perhaps more importantly, the quality of the new jobs seems to be improving as well.  According to a recent research piece by Maury Harris, Economist at UBS, job creation in high-wage industries is now keeping pace with that in low-wage industries (roughly 1.4 million new jobs in each category over the past year).  In addition, Harris points out that "the number of persons working on a full-time basis rose by 2.7 million" over the past year, while "there was a 616,000 net decline in the number of persons working involuntarily part-time for economic reasons."  This is all good news as the improvement in the labor data will hopefully lead to better and more widespread income growth in the near future.

Why is the state of the labor market so important?  Because about two-thirds of our economy - the largest in the world -  is composed of consumer spending.  As the quantity and quality of new jobs in the US improve, consumers theoretically should gain more confidence and begin to spend more freely.  The increased spending should then, in a virtuous cycle, trigger increased corporate investment and hiring.  This economic transition, whereby the economy reaches "escape velocity" and the Fed can completely remove the training wheels, has been predicted by many an economist over the course of our economic recovery.  Is it finally here?  Did Friday's jobs report represent the inflection point for this six-year-old economic recovery?

As you may have guessed, we remain skeptical.  The missing ingredient is the consumer's propensity to spend.  Despite a better labor market and windfalls from lower energy prices, the consumer still seems either unwilling or unable to spend at a more robust pace.  Personal Spending was flat in April even though Personal Income rose 0.4%.  The disparity led to another increase in the savings rate to 5.6% in April from 5.2% in March.  We think higher savings rates are long overdue and are here to stay.  The next big data point to watch will be Retail Sales for May, which will be released on Thursday.  But we don't think May's numbers, while better than April, will be much cause for celebration either.

The problem is that most consumers are unlikely to revert back to the reckless spending patterns that characterized the period prior to the financial crisis.  People don't seem to have the ability or inclination to do so.  The consumer engine requires not only fuel (which can come from income, debt, or savings), but also the willingness to use up that fuel.  Consider the following:

Perhaps a more likely explanation for the increase in bond yields may be that the threat of deflation has receded.  As the chart below shows, commodity prices have stopped dropping and the dollar has given back a good portion of its gains.  As deflation threats recede, the attractiveness of bonds recedes as well. 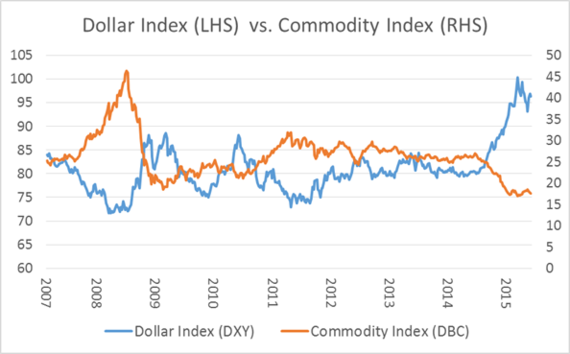 As the pieces to the puzzle continue to come in, we feel incrementally better about the intermediate-term outlook for the economy.  However, we continue to believe that the financial crisis caused a lasting change in the consumer's ability and willingness to spend.  We'd love to be proven wrong, but six years into the recovery it seems like sub-par growth is more likely than not to continue.