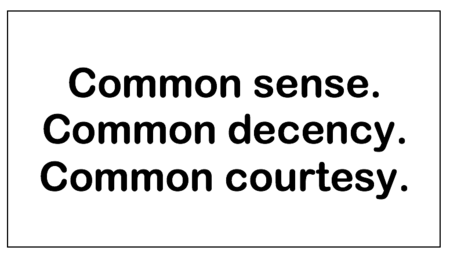 Recently I invited a friend to participate in a Living Room Conversation. He declined, saying he wasn't smart enough. He wrote back: "I would be privileged to join you in your 'living room conversations' but, as I have reflected on it... I would love to think I am among the Listeners ... but, unfortunately, I am not that intelligent."

"Not that smart," though, is not a disqualifier. Living Room Conversations is not a debating society set up to promote verbal jousting. It's something much more interesting (and fun). It's really about three things.

There are three, and only three, core elements to healthy politics, including healthy, rather than ugly, political arguments.

But IQ is irrelevant.

Shockingly, the "Three Commons" are all that's needed to transform the argument between people of radically different opinions into a fun, rather than horrid, conversation. (If only we can import the principle of the "Three Commons" into America's Thanksgiving family dinners imagine the miseries that will be averted. Bonus!)

We believe that the "Three Commons" can rescue politics from its status as a blood sport and transform it into something fun, vibrant, and productive.

Living Room Conversations isn't designed for rocket scientists. This is a good thing. Rocket scientists trend toward "Once the rockets are up who cares where they come down, that's not my department, says Werner von Braun." (Which violates the principle of "Common Decency.")

To which, nervously putting aside my fear of being Mr. Buzzkill, I suggested we honor classical postcard design principles and just go with Having a wonderful conversation. Wish you were here! -- LivingRoomConversations.org.

If the current presidential election is any indication -- and I suggest that it is -- politics has descended far from the Three Commons, Sense, Decency, and Courtesy. We have discovered, in practice, that these three simple, common, things are all that it takes to transform the social dynamic from animosity to enjoyable mutual discovery.

It's shockingly easy. And fun.

When I replied, along these lines, to my friend who expressed reluctance to join the party he answered: "I am delighted to realize that I might have the opportunity to not only observe the Living Room Conversations, but, potentially, even participate. which would be a large step for me.  I will look at the site."

Those qualities are beginning to look like key assets for changing the tenor of the social conversation. The political conversation lags, rather than leads, the culture. Shyness and humility look key to resurrecting the three qualities that are all that, apparently, are needed to really Make America Great Again.

All three have become badly eroded.

There is a startlingly easy, unexpectedly fun, way for you -- yeah, I'm talkin' to you! -- to make a meaningful impact in putting society, and even politics, back to rights.  (The sooner the better. Just say'n.)

And, in the process, have fun.

Having a wonderful conversation.
Wish you were here!