I'm 30 years old. Most people I know my age work like a dog in a job they hate, stumbling through a sleep-deprived hysteria of a life, hoping it'll all pay off someday. Some of them truly love what they do, but it's rare. Of the busiest people I know, those systematically driving themselves insane outnumber those who like what they do 10 to one, at least.

One of the top things elderly Americans regret in life is being too busy to have had the time to do the things they actually enjoyed. Older Americans overwhelmingly wish they had worked and less and spent more time with family, going for a walk, sleeping in, and just enjoying life. Few people my age will take this advice seriously.

The field of positive psychology teaches us that having control over your time is one of the biggest keys to being happy. People adjust to material stuff quickly. But losing control of your time makes almost everyone miserable. No matter how much you love work, everyone should do everything they can to gain control over their time.

And here's what's crazy: Most of us could if we wanted to.

Take a look at this chart. It shows how many hours an average American needs to work today to produce as much as stuff as he did in 1950: 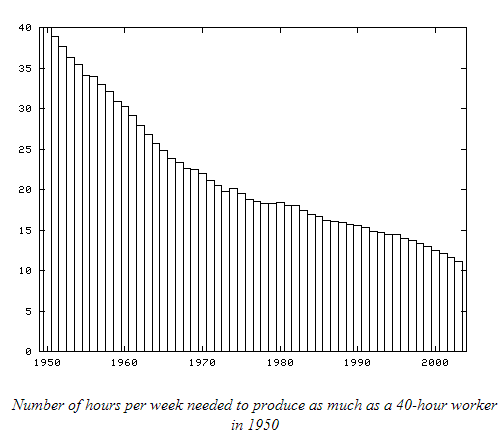 We are insanely more productive today than we were half a century ago. If every American worked just 11 hours a week, we could effectively be as rich per person as we were in 1950 -- a time most of us look back on as a nostalgic era of prosperity.

In 1930, John Maynard Keynes wrote an essay called "Economic Possibilities for our Grandchildren." The economy was a wreck in 1930, but Keynes had a radical idea: By 2030, we would all be so rich and productive that the average American would basically become Homer Simpson, working as little as possible and drowning in leisure. Keynes wrote:

For the first time since his creation man will be faced with his real, his permanent problem -- how to use his freedom from pressing economic cares, how to occupy the leisure, which science and compound interest will have won for him, to live wisely and agreeably and well.

Keynes thought we'd all be productive enough to get by on 15 hours of work per week -- nine to noon, five days a week. "For three hours a day is quite enough to satisfy ... most of us!"

This sounds like a joke today. But Keynes was pretty much spot-on projecting how rich and productive Americans would become.

"I would predict that the standard of life in progressive countries one hundred years hence will be between four and eight times as high as it is today," Keynes wrote.

The typical American works slightly fewer hours today than they did in the past, but not many. The average worker clocked 40.6 hours per week when Keynes wrote his paper in 1930. Today, they work about 34 hours per week.

There are holes in Keynes' prediction that we'd all be working 15 hours a week. "Except for the financially independent, people aren't really free to choose their hours of work," economist Nicole Fortin wrote last year. And the reason we're richer is because people have worked as hard as they can, creating new technology that makes us better and smarter year after year.

But I think the biggest reason we keep working full steam ahead despite growing wealth is because most people's idea of a good life is measured relative to their peers, rather than absolute terms. You don't want a Rolex because it does something that makes your life better. You want it because your neighbor has one. So even though almost everyone is better off than they would have been 100 years ago, we don't feel better off because everyone else is better off, too. And since we don't feel better off, we keep working like slaves, hoping we'll someday get to a magical financial happy place. It's so depressing.

Keynes realized that people's desires would keep growing no matter how rich they became. He wrote about needs "which are relative in the sense that we feel them only if their satisfaction lifts us above, makes us feel superior to, our fellows."

But that's just a personality issue. If you can get over it, Keynes wrote, "a point may soon be reached, much sooner perhaps than we are all of us aware of, when these needs are satisfied in the sense that we prefer to devote our further energies to non-economic purposes."

Here's what it comes down to: Most of us would be happier if we had more control over our time. And we can gain more control over our time by realizing that what used to be considered middle class -- even wealthy -- is now viewed by some as abject poverty, only because our expectations have surged. By keeping your expectations in check and not trying to keep up with your neighbor, most of us can probably retire -- or gain enough financial independence to work in a job we love -- far sooner than you realize