From the time my daughter was old enough to jump up and down, she asked for a trampoline every year for her birthday. She never got one and there are four very good reasons why. While she made it through childhood relatively unscathed, she had four brothers who each thought they were Superman. I spent so much time in the emergency room with them that one of the doctors thought I worked there and asked me about a patient in room four. When I told him I was the mother of the patient not the nurse, he looked puzzled.

"You look really familiar," he said.

"That's because I'm here every week with a different kid." He made some notes on his chart, probably to call social services and went in search of a real nurse.

Once I tried counting how many times we had been to the emergency room with the boys. I couldn't remember them all. I decided to make a list of the visits that ranked at least a five on the scream-o-meter. I named it that because it was usually our daughter that notified me when blood was spouting from one of her brothers and being the little drama queen she was, she felt the need to announce it with a scream loud enough to make the dog howl.

1. Son number one broke up a family reunion just as we were getting ready to eat by running into a book case and cutting the thin skin above his eye open. A little cut can produce a lot of blood and this one squirted like a ketchup bottle that had been stepped on. We went to the emergency room and he screamed the whole way there and throughout the procedure. One of my least favorite jobs as a mother (besides cleaning the toilet in a house full of men) was holding down a screaming child while they got stitched up. You would think as much practice as I had I would get used to it, but I never did. That day we not only missed the reunion we didn't get to eat all the great-looking food the relatives had brought. This was not the first (or the last) meal I missed during my motherhood years. Ask any mom who has young children, feeding them is so much work that by the time you get to the table you don't care if you eat or not.

2. Son number two was the champion when it came to getting injured. It started when he jumped out of the bathtub onto a slick tiled floor and split the same place above his eye that his brother had, but he continued on through the years and averaged at least one emergency room visit a year. He cut his finger open with a knife. He broke his glasses and cut himself wrestling with cousins. He jumped down a flight of stairs and hit his head on an overhang. And on and on....

3. Then came the twins. What hair-raising dare-devil feats the other two boys hadn't thought of, they did. Their accidents usually involved something with wheels. They were riding bikes without training wheels by the time they were three. By the time they were four, their older cousin had taught them that they could "get air" by building ramps out of scrap pieces of wood. The three of them were miniature Evel Knievels and they were fearless. I would look out my kitchen window and they would go flying by, their skinny little legs pumping the pedals of their bikes as fast as they could.

The twins eventually got bored with just the cuts and bruises they got from bicycles and started asking for dirt bikes. I was terrified of what might happen and did my best to keep them from getting motorized wheels, but they wore us down with endless begging. I don't mean the normal whining like most kids do (and their sister did over the trampoline) I mean from the moment they woke up until they fell asleep they found ways to talk about dirt bikes. I still have pages and pages of notes they left us all over the house with pictures of dirt bikes and pleas to Santa, the Easter Bunny, the Tooth Fairy and anyone else that might have a dime, to help them get a dirt bike. When their dad reached a point where he couldn't take it anymore he told them if they each earned a certain amount of money they could have one. Of course they raised it in record time and the next thing I know we are the proud owners of something that can take "getting air" to a whole new level.

About this time a neighbor (who didn't have children) built a dirt bike track right down the road from us. It sounded like the neighborhood was being invaded by giant bumble bees on the days the track was open. The twins loved it and I hated it, but they didn't care. They looked at it and saw new ways to fly through the air. I looked at it and imagined them being carried out on a stretcher. Thankfully, that never happened to my boys but it did to other boys and my heart ached for them and their mothers.

There were accidents on the dirt bikes, some of which I'm sure they never told me about, but it was a four wheeler that sent one of them to the hospital. His brother was driving and he was riding behind him. They backed into a tree and smashed a finger to the point it looked like he had chopped the end of it off and of course it required stitches.

Back To the Trampoline

My daughter is now a grown woman and she and her husband have two children. Their oldest child is a girl and for her third birthday she got a trampoline. Granted, it's a little trampoline and has sides around it to keep her from falling off, so it's much safer than the one my daughter wanted years ago. But it's still a trampoline.

"I always wanted one when I was a child," my daughter said wistfully.

"I know you did," I replied. I opened my mouth to tell her why she never got one but about that time my grandson fell and bumped his head on a table. No stitches...this time.

He is only 10 months old but is already shows signs of following in his uncle's footsteps. Just last week my daughter had to call 911 when he put a lamp cord in his mouth and bit into a live wire. Thankfully, he was fine but my daughter was a nervous wreck. By the time I got to her house the baby was happy, but she was white as a ghost and trembling from head to toe.

"Do you think he will have side effects? Should I take him to the emergency room? I hate that stupid lamp! Get out of my house!" she yelled.

I remember my aunt telling me when my son got married that my job as mother of the groom was to keep my mouth shut and smile. I suspect that rule applies to being a grandmother too. I'm just not very good at it yet but I'm trying, so I didn't tell her why she never got a trampoline. Something tells me she will figure it out for herself. 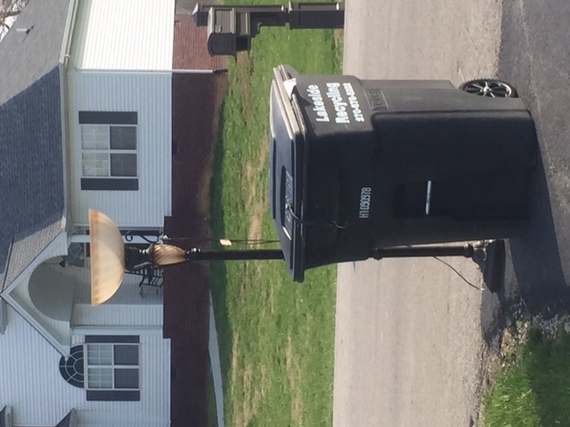 PHOTO GALLERY
5 Tips For Dealing With Defiant Teens
Download
Calling all HuffPost superfans!
Sign up for membership to become a founding member and help shape HuffPost's next chapter
Join HuffPost

1 / 5
Root Cause
Trying to find out the root cause behind a defiant teen's rebellion is a great step in a positive direction. Your teen may be having problems with a friend, a girlfriend/boyfriend or a teacher and misdirecting their emotions at you. Try talking with them about what could be causing the behavior.
Alamy