There are seven quintillion, five hundred quadrillion grains of sand in the world, according to math geniuses at the University of Hawaii. That’s more sand granules in Earth’s seas, lakes, and deserts than we could ever imagine.

Where does it all come from? In Hawaii, where beaches are constantly ranked the best in the world, a significant portion of that pristine, white, beautiful sand is actually poop.

Parrotfishes, or uhu in Hawaiian, are key players in regulating algae and reef life. Their parrot-like beaks and fused-together teeth are used for scraping and biting dead coral, while additional teeth in their throats help to break it all down into sand. Snorkelers can actually hear them chomping or see the bite marks they leave on rocks.

Because parrotfishes don’t have stomachs, their meals pass straight through the long intestine, exploding in a cloud of sand out the backdoor. Larger parrotfish are like sand factories, producing as much as 840 pounds of sand per year. For Oahu’s snorkeling hot spot, Hanauma Bay (where a few hundred parrotfish graze), that means hundreds of tons of fish-made sand per year.

Worms, sponges, and oysters also produce Pacific ocean sand, but no animal is as proficient as the parrotfish, a badge of honor it has held for centuries. According to the Maui Ocean Center, the native Hawaiian name for the female redlip parrotfish translates to “loose bowels.”

We can see why: 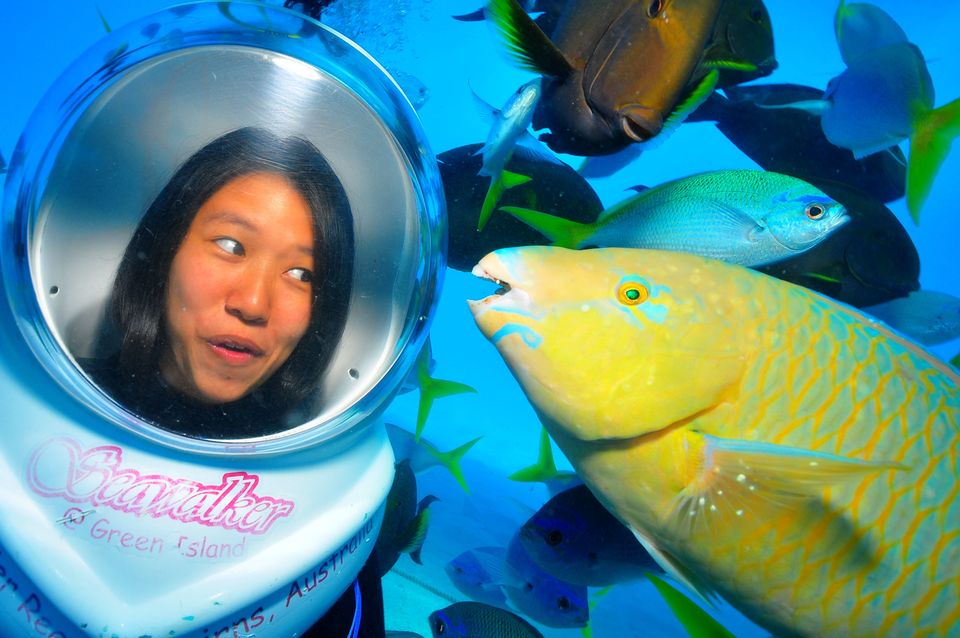 1 / 7
Meet Gavin the photobombing fish whose loves nothing better than getting his toothy grin on camera. The parrot fish has become the main attraction for divers near Green Island, off Australias Great Barrier Reef. The bright yellow and blue fish flashes his pearly whites for the camera as tourists pose with him in his underwater world. And as these hilarious pictures show Gavin loves nothing better than smiling for the pictures with a host of lovely ladies. Karl Kuhle, general manager for Seawalker Australia, said grinning Gavin had become something of a celebrity.
Caters