The compelling documentary on captive killer whales, "Blackfish", recently opened at the Kahala Theaters on Oʻahu, and viewing it may lead you wonder if these fascinating whales can be seen around Hawaiʻi. The answer, according to Cascadia Research Collective biologist Dr. Robin Baird, is that orcas are rarely observed here but that there are other types of small whales also colloquially referred to as blackfish that do frequent Hawaiian waters.

Blessing ceremony for a young orca who had to be euthanized on Kauaʻi in 2008 (NOAA).

The term "blackfish" is a catch-all description that can create a bit of confusion because whales are not fish (plus there are species of actual fish that are also referred to as blackfish), and it can be easy to misidentify them since they look similar from a distance. 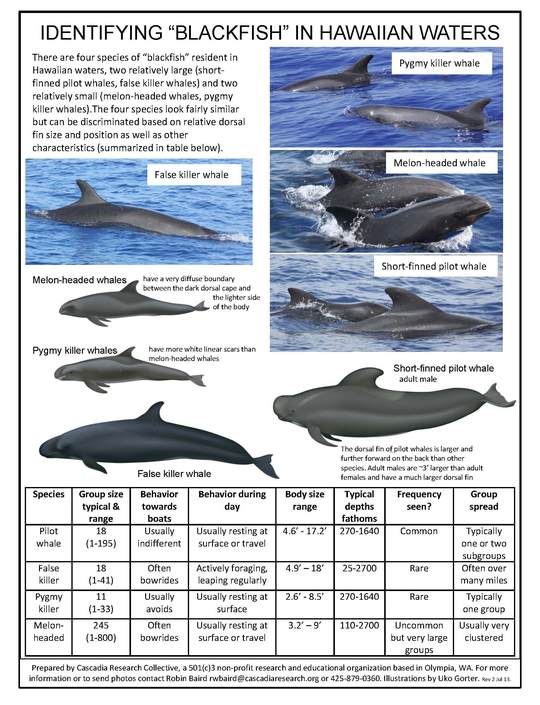 Hawai'i is home to four other species collectively referred to as "blackfish," and at least one of the species, the false killer whale, demonstrates the strong family bonds that characterize their more glamorous cousins, the iconic killer whales featured in the film.

Because of anatomical similarities to their larger relatives they were given the name "false killer whale." Yet these slim whales look more like pilot whales than killer whales. They are now saddled with an ironic name which tells nothing about them (would we call dogs "not wolves?") -- a name which unfortunately contains two negative words: "false" and "killer." People also refer to them using their scientific name, pseudorca (pronounced "suedorca"). Worse than having the unfortunate moniker, these whales are easily mistaken for other species and chances are they are blamed for more fisheries interactions than they are actually responsible for.

Dr. Baird's research has demonstrated that these false killer whales are truly kamaʻaina -- some of them are permanent residents of Hawaiian waters where they remain with their families through their long lives. All family members share in the feast when a fish is caught, from the grandparents down to the babies. (These whales are known to offer to share the bounty with divers and boaters as well as with each other).

And like the killer whales of the Pacific Northwest, all four local species have been kept in captivity with equally bleak results -- and also like their northern cousins, the local false killer whales are struggling to survive. Baird cautions that if something is not done soon, our resident whale families may die out just as we are learning what they have to offer. Even though the false killer whales potentially come into conflict with those who make their living from the ocean, any time an indigenous species goes extinct the whole food chain can be disrupted, particularly if that species is an apex predator. No one, for instance, would like to see a large shark species move in to fill the void.

We might not want to accept the whales' offers of half-eaten raw fish, but we do want to learn what they can teach us about the other intelligent, family oriented beings who share our planet, and to understand their role in the ecosystem.

More information on the false killer whales can be found on the Cascadia website . Their general page on whales and dolphins in Hawai'I can be found here.