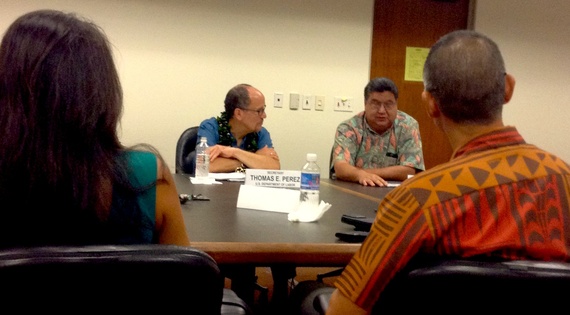 Last month, the U.S. Secretary of Labor Tom Perez came to Hawaii to convene a roundtable on paid family leave.

I've been following this movement for a few years, so I was not surprised when the secretary talked about the high numbers of qualified women who drop out of the workforce because the "childcare math" doesn't pencil out, and how this loss of talent impacts the U.S. economy and our ability to compete on a global scale. I also expected him to cite ten years of data demonstrating the financial benefits of providing paid leave for businesses and the economy at-large.

What I did not know was what our Hawaii lawmakers would say.

Paid leave bills have consistently died in our state, and after watching the painful demise of this year's HB496, I was eager to hear from the state legislators in attendance. The bill had required all employees to contribute to a trust fund, providing them with up to 12 weeks of paid leave for family medical issues, including the birth of a child. By the time it failed, however, public employees had been exempted from the law and the number of paid weeks had been reduced to four. Some advocates lamented that had HB496 passed in its final form, Hawaii would have had the worst leave law in the country.

In addition to legislators, Hawaii's labor director, representatives of the business community, and advocates for workers and families attended the roundtable.

Everyone who spoke expressed support for paid family leave.

Even Chamber of Commerce President Sherry Menor-McNamara noted that Hawaii has one of the lowest unemployment rates in the nation, and that to be competitive and attract and retain talent, Hawaii businesses must offer incentives to potential employees.

It was gratifying to be in a room full of people who understood that families need paid time off when a baby is born or a family member has a medical issue.

Yet at least three states have implemented mandatory paid leave laws so far: California, Rhode Island and New Jersey. And all three fund their programs through employee deductions (with only New Jersey requiring employer support). They provide from four to six weeks of paid time off, with "pay" calculated at 55% of the employee's salary in California, 60% in Rhode Island, and 66% in New Jersey.

By contrast, paid leave in other parts of the world ranges from 14 weeks to over a year, and the percentage of wages paid to the employee varies from a low of 50% in Greece to 80 to 100% in thirty other countries.

While Scandinavian countries are of course on the list of almost full compensation, so are Ireland, Italy, Bulgaria, Poland, Portugal, Romania, Ukraine, Spain, and Lithuania, to name a few. In most countries, either the federal government or employers bear the cost of paid leave.

There are good reasons for providing adequate time off when a child is born. It takes six weeks or more just to recover from a birth - longer for a Cesarean or if the mother experiences complications. Then there's the time needed to bond with the baby, assuming there are no additional health issues. Studies show that 10 months of parental care is optimum for a child's healthy development, and the American Academy of Pediatrics recommends that a mother breastfeed for a year for maximum health benefits for the baby and mother.

Yet only 12% of American workers have access to any paid maternity leave at all, and as a result, one in three new moms go back to work almost immediately after having a child.

Something needs to be done -- and Hawaii can lead the way.

Most families require at least two incomes in our state. This means that when Hawaii parents have to choose between their families and their jobs, that decision has far-reaching consequences. If Hawaii were to model its paid leave policy on California, Rhode Island, or New Jersey, parents would not have to make this choice. Yet even the states that provide the longest leave -- California and New Jersey -- only offer each parent six weeks to care for a new child before returning to work. This includes the mother's recovery time.

Furthermore, even with New Jersey, the most generous state, as a model, Hawaii families would have to survive on a 34% reduction in income for each parent who stayed home with the baby. This reduction would take place just when the family was paying for the medical costs of the birth, not to mention well baby visits, diapers, clothes, a car seat, stroller, crib, and other added expenses.

Once both parents were back at work, they would have to pay for childcare, which for an infant in Hawaii annually costs $11,748, or 13.5% of our state's median income for a two-parent family.

In the most expensive state in the nation, these issues are not theoretical.

I therefore appreciated that State Senators Gilbert Keith-Agaran and Roz Baker asked about the "hows" of structuring paid leave policies - as well as vacation and sick time. As wonky as these discussions can be, the devil is in the details.

Senator Suzanne Chun-Oakland also asked for specific information, requesting that the Secretary explain how employers in other countries handle an employee's absence when paid leave is taken. In opposing this year's proposed paid leave bill, Hawaii's Chamber of Commerce had testified that "12 weeks [of leave creates] a huge burden for an employer to provide coverage for that employee not being at work." The Secretary's example of Canadian employers hiring contractors demonstrated that there are diverse ways of supporting families and restructuring our work culture.

As the discussion wound down, Senate President Ron Kouchi told stories about Hawaii Millennials who are concerned about work-life balance, and are not predisposed to compromise when it comes to family. He wondered if our state would wait to be overwhelmed by the values coming into the workforce, or would in fact drive a new 21st century economic policy.

Clearly our leaders see that paid leave is necessary, inevitable, and in the best interests of our families and economy. While it was encouraging that they were looking at other states and countries, any paid leave structure that we implement should reflect Hawaii's values, in particular ohana, which beyond "family" also implies responsibility for the next generation.

Earlier in the day, Representative Della Au Belatti described the need for a paid leave movement beyond the walls of the legislature - in churches, at offices, in coffee shops, and on playgrounds. Such a movement could remind lawmakers that our economy is only as healthy as our families, and that a truly effective policy will provide enough time and adequate pay for all of Hawaii's families.

Hopefully, next year, Hawaii will pass the best paid leave legislation in the country -- and we will be able to say that the Aloha state is also the Ohana state.