You know that first day of spring? When everyone breaks out their warm-weather clothing and has that doofy smile on their face? Well, that just happened in Hawaii except instead of a spring day, it was because of a snow day.

Earlier this week, a snow storm hit the summits of Mauna Loa and Mauna Kea on Hawaii's Big Island and residents were (understandably) psyched. From flip-flop snowshoes to "snow surfing," locals made the most of the snow days, perhaps teaching the rest of us to embrace the joys of winter a bit more.

Snow falls almost every winter in Hawaii, but only at the tallest summits of the islands' three tallest volcanoes: Mauna Loa (the Earth's largest volcano) and Mauna Kea, both on the Big Island, and Haleakala on Maui.

Snow was so fierce this past week that one hiker even had to be rescued after being caught in the storm for two days.

"The snow level almost never gets below 9,000 feet ... during the winter," Ken Rubin, assistant professor of geology and geophysics at the University of Hawaii, told Wunderground.

"But since these mountains are taller than 13,600 feet, 13,700 feet and 10,000 feet, respectively, they get dusted with snow a few times a year. It rarely stays on the ground for more than a few days though."

Skiers and snowboarders still manage to shred the slopes of Mauna Kea even though it is not maintained as a recreational ski area. According to Mauna Kea Ski Corporation, "Skiing areas may have unmarked and exposed rocks ... Most runs are for intermediate to advanced skiers/snowboarders -- weather permitting."

A lot of people have no idea that it snows in #Hawaii!I live on the slopes of #MaunaKea which has choke snow now! pic.twitter.com/woeQPBQ2mB

The Big Island enjoys all but two of the world's climate zones. It won't take you long, for example, to go from playing in the snow to this:

Want to see what it looks like right now atop a Hawaiian volcano? Check out Mauna Kea's live streaming weather cams here. 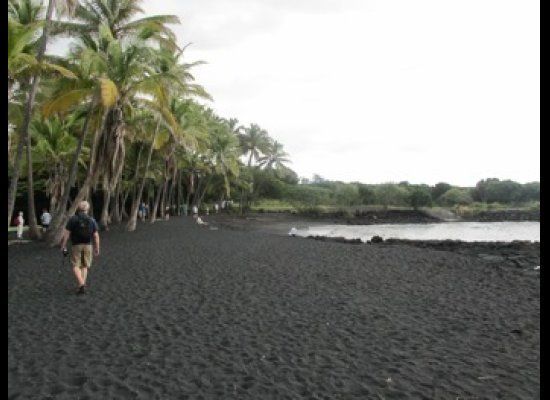