Nearly every winter, the rest of the continental United States is surprised by headlines announcing that snow has graced the summits of Hawaii’s tallest peaks. But this week, something especially remarkable happened.

As a winter storm collided with the Aloha State over the weekend, a rare snowfall turned the much lower Polipoli Spring State Park on Maui into a wintry wonderland.

Melissa Dye, a meteorologist at the National Weather Service in Honolulu, told HuffPost that Haleakala’s summit, located 3,800 feet higher than Polipoli, saw 4-foot drifts of snow, though park rangers were unable to measure it due to strong winds.

“It’s just real light like ice now, so it’s just blowing around and drifting,” she said of the summit.

Dye also said that the temperatures at Polipoli must have been at least 32 degrees Fahrenheit, the freezing point, though the National Weather Service doesn’t have a temperature sensor there.

Snow covered Polipoli as a part of a storm that battered the islands over the weekend with strong winds, powerful surf and relatively low temperatures for the subtropical state.

As bad weather continues, the National Weather Service on Tuesday issued a winter storm watch for the summits of Haleakala on Maui and Mauna Kea and Mauna Loa on the Big Island, noting that there will be periods of “freezing rain and snow possible.”

“Very cold air aloft will once again move over the islands beginning tonight and continuing into Friday,” officials said in a notice.

Dye told HuffPost that snow in Hawaii “is not unheard of.” The peaks of Mauna Kea and Mauna Loa, which reach higher than 13,000 feet, receive snow every winter, while the summit of Haleakala volcano sees snow at elevations above 9,000 feet every three to four years.

However, snowfall at Polipoli State Park, at 6,200 feet, is out of the ordinary, Dye added.

In a Facebook post, the state’s Department of Land and Natural Resources said that this may be the first snow recorded there.

The DLNR’s State Parks office “reports that perhaps for the first time ever, snow has fallen in a Hawai‘i State Park,” officials said on Facebook. “Polipoli State Park on Maui is blanketed with snow.”

Dye said she couldn’t confirm whether it was the first time snow had ever fallen at the state park, but she did note that it was uncommon.

For local residents, the white-dusted mountain was a sight to behold.

The National Weather Service in Honolulu described the storm battering Hawaii over the weekend as a “historic low pressure system” in a tweet on Sunday.

Winds of up to 191 miles per hour whipped at Mauna Kea’s peak on Sunday, while a maelstrom of waves up to 60 feet churned on Oahu’s north shore.

This story was updated with a clarification from Dye that the 4-foot drifts occurred at Haleakala’s summit. 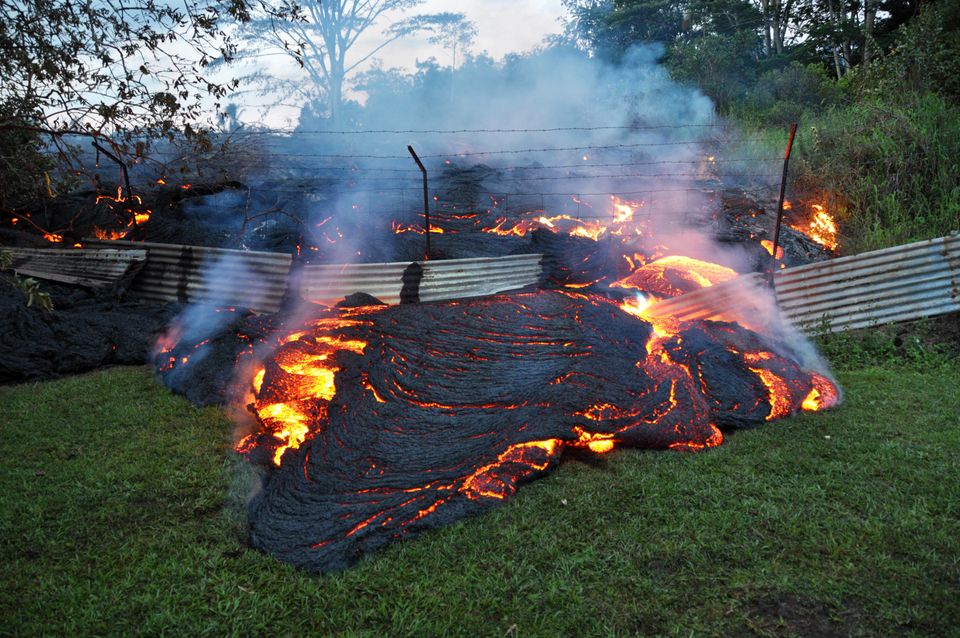 1 / 13
This Tuesday, Oct. 28, 2014 photo provided by the U.S. Geological Survey shows lava that has pushed through a fence marking a property boundary above the town of Pahoa on the Big Island of Hawaii. After weeks of slow, stop-and-go movement, a river of asphalt-black lava was less than the length of a football field from homes in the Big Island community Tuesday. The lava flow easily burned down an empty shed at about 7:30 a.m., several hours after entering a residential property in Pahoa Village, said Hawaii County Civil Defense Director Darryl Oliveira. A branch of the molten stream was less than 100 yards (90 meters) from a two-story house. It could hit the home later Tuesday if it continues on its current path, Oliveira estimated. Residents of Pahoa Village, the commercial center of the island's rural Puna district south of Hilo, have had weeks to prepare for what's been described as a slow-motion disaster. Most have either already left or are prepared to go. (AP Photo/U.S. Geological Survey)
ASSOCIATED PRESS