The Hawaii Supreme Court's decision to invalidate a permit granted to build the $1.4 billion Thirty Meter Telescope (TMT) on Mauna Kea was met with jubilation by people opposed to the project, many of whom spent the past year protesting against it, with a few dozen even being tossed in jail as a result of those nonviolent demonstrations.

"We are celebrating this victory for our mauna [mountain], for our Hawaii, before we have to look at the next steps," said Pua Case, a Native Hawaiian and one of the leaders of a group calling itself the Protectors of Mauna Kea, which has long opposed construction of the 18-story telescope.

Case was one of six appellants of the group called The Mauna Kea Hui, which challenged a decision by the state Board of Land and Natural Resources (BLNR) to grant a conservation district use permit (CDUP) to the University of Hawaii at Hilo for construction of TMT.

The Mauna Kea Hui filed a lawsuit in the case in 2013, alleging that the BLNR violated due process and failed to properly issue a permit for construction of the telescope. The state Third Circuit Court affirmed the BLNR decision, which the Mauna Kea Hui appealed to the Intermediate Court of Appeals (ICA). In May, the Hui filed an application to transfer the case to the Hawaii Supreme Court, which took up the case and issued its decision last week.

"We are grateful to our legal team, fellow petitioners and all who continue to stand for sacred lands and life ways," Case said.

Case was one of dozens of people who came to Pasadena last spring to demonstrate against the project in front of TMT corporate headquarters on South Arroyo Parkway in Pasadena. Along with its leadership role in TMT, which would be the largest telescope in the world when completed, one with 12 times the resolution of Hubble, Caltech operates the Caltech Submillimeter Observatory and manages the W.M. Keck Observatory, with its twin 10-meter Keck I and Keck II telescopes. With funding from nonprofit organizations, Caltech and the University of California, TMT's partners include universities in Canada, China, India and Japan. All told, there are currently 13 telescopes located on Mauna Kea. The University of Hawaii, which also has a telescope on the mountain, holds a lease from the state of Hawaii for what is known as the Mauna Kea Science Reserve.

"Quite simply," Chief Justice Mark Recktenwald wrote in the court's opinion, the BLNR "put the cart before the horse when it issued the permit before the request for a contested case hearing was resolved and the hearing was held."

In a concurring opinion, Hawaii News Now reported that Supreme Court Justice Richard Pollack wrote that the BLNR "failed to conduct a contested case hearing before deciding the merits of UH's application and summarily granted the requested permit without duly accounting for the constitutional rights and values implicated. The board acted in contravention of the protections of Native Hawaii customs and traditions."

Officials with the project are pondering what comes next.

"We thank the Hawaii Supreme Court for the timely ruling and we respect their decision," Henry Yang, chairman of the TMT International Observatory Board of Directors, said in a prepared statement issued after the ruling. "TMT will follow the process set forth by the state, as we always have. We are assessing our next steps on the way forward. We appreciate and thank the people of Hawaii and our supporters from these last eight-plus years."

According to the TMT website, project managers have been sensitive to the cultural significance of Mauna Kea. Since selecting the site for TMT, officials with the project have: "Consulted with Native Hawaiian groups; provided opportunities for community feedback; held more than 20 public meetings; participated in one-on-one meetings, small and larger group presentations; engaged in open dialogue and meaningful discussions with community members and stakeholders; and supported numerous STEM (science, technology, engineering and mathematics) education programs on the island, including robotics, internships, after school and intercession programs, and others," according to the site.

Also in that time, TMT officials say the project underwent seven separate public reviews and a court hearing in May 2013 that resulted in the project obtaining the permit.

"But we fully intend to follow the relevant state laws," Stone told Hawaii News Now. "We certainly have the vision of the next generation telescope in Hawaii in the Northern Hemisphere."

Opponents of the project started coming into public focus in October 2014, blocking roads and stopping vehicles from getting through to a ground-breaking ceremony, according to The Associated Press and other news sources. In April, 31 protesters were arrested, bringing construction to a halt. From then on, crowds of people gathering at the 9,000-foot level of the nearly 14,000-foot high mountain to stop the project grew from dozens to hundreds. And on June 24, 12 more protesters were arrested. On Nov. 17, the state Supreme Court temporarily suspended the TMT permit.

Joshua Lanakila Mangauil, a Hawaiian Studies teacher and another leader of the Protectors, told Los Angeles-based Sandwich Islands Network Radio that he and the others will not back down. He was quick to add that he and his fellow protesters are not against the scientific goals of the telescope. They simply believe that construction of another telescope will further desecrate the sacred mountain.

"This is a new time when we are greatly waking up to the combined responsibility of protecting our sacred places and our natural world," Mangauil wrote in an email to the Pasadena Weekly. "Truth and dedication to standing firm with aloha in our hearts and combining the strengths of every member of our community is what has brought us this victory, and united we will continue."

Along with the potential danger to the mountain's cultural character, the Protectors are also concerned that the proposed telescope, with a structure being built underground, will contaminate the main water source of the Big Island that originates from the mountain peak through snow melt, rain and mist. Mauna Kea is also home to unique plants and animals found only on the mountain. The Protectors believe that TMT will have adverse impacts on them, as well as on native culture and communities surrounding the mountain, said Mangauil, who was featured in a Pasadena Weekly cover story titled "Defenders of the Mountain" which appeared on April 23.

Legal analysts told Hawaii News Now that the contested case hearing process before the BLNR will have to start over. David Callies, a law professor at the University of Hawaii, said it is a delay. "But it is not an insignificant delay," he said. "We're not talking about a few weeks or a few months. We're talking about at least a year, if not more."

"While our immediate attention is to removing the machinery from the mountain and on obtaining court dismissals for the arrestees whose stance on the mountain resulted in the cases we are now facing in court, our long-term goal remains the same: to protect Mauna Kea from further desecration, destruction and construction and at the same time to strengthen and unify people in Hawaii and all over the world in a combined movement to safeguard people, life ways and places from the mountains to the sea," Case wrote to the newspaper. 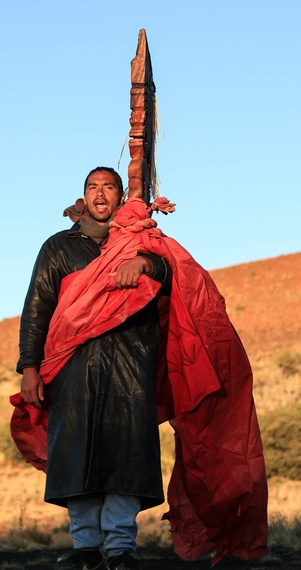