The Thirty Meter Telescope (TMT) on Hawaii's Big Island is slated to be one of the world's largest, most powerful telescopes. But the $1.4-billion project is now in jeopardy in the aftermath of protests on social media and across Hawaii that brought construction to a halt.

The site of the proposed project on the summit of Mauna Kea is a sacred location for many Native Hawaiians, and demonstrations have sparked broader discussions about both respect for indigenous cultures and the meaning of scientific progress.

Here's everything you need to know to understand the multi-faceted issue:

Mauna Kea is a dormant volcano on the Big Island of Hawaii.
From seafloor to summit, it's the highest mountain in the world at 32,000 feet. Because of dry, clean air at the summit, which rises 13,796 feet above sea level, and its distance from light pollution, the telescopes on Mauna Kea are able to view the faintest galaxies. 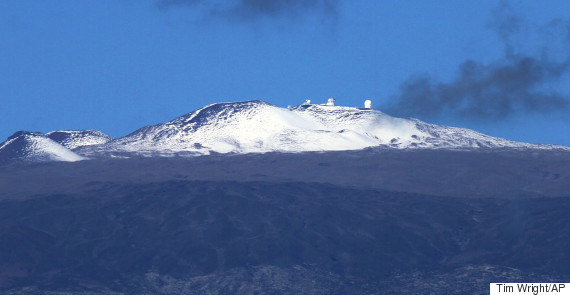 Scientists love Mauna Kea.
The summit is home to the world's largest astronomical observatory, with 13 working telescopes operated by astronomers from 11 different countries. The combined light-gathering power of the instruments at Mauna Kea Observatories is 60 times greater than that of the Hubble Space Telescope. 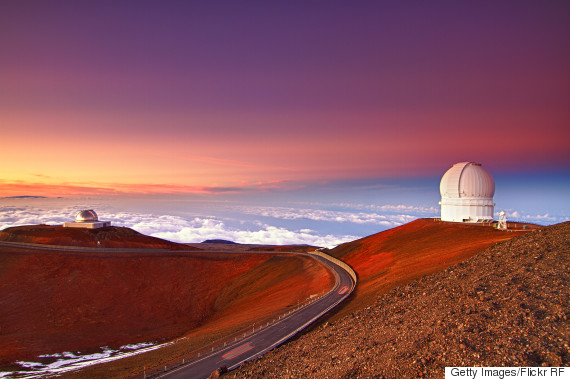 Opposition to building on Mauna Kea is nothing new.
According to Mana, "This may be the most vocal (and viral) protest of them all, but lawsuits, opposing testimonies and 'sleep-ins' against the development of telescopes on top of Mauna Kea have been happening consistently for decades."

TMT is especially controversial because of the scope of the project.
Although the TMT site on Mauna Kea was selected because it is largely hidden and there are no archeological finds or ancient burials in the immediate area, the project is significantly larger than anything already built there. The telescope would be 18 stories tall with structures spanning 1.44 acres.

The $1.4 billion project has received funding from a number of private and public organizations, including the University of California system, the California Institute of Technology and the Association of Canadian Universities for Research in Astronomy. The United States, Japan, India, Canada and China have all contributed as well. 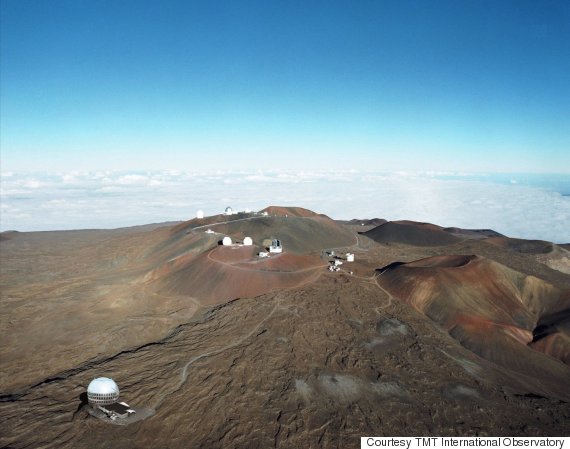 An artist concept illustrating the TMT Observatory (bottom left) at the proposed site on Mauna Kea.

To some Native Hawaiians, the Thirty Meter Telescope would desecrate a very sacred location.
"Our stance is not against the science," protester Lanakila Mangauil told the Associated Press earlier this month. "It's not against the [telescope] itself. It's against their choice of place."

Some conservationists and environmentalists also oppose the telescope.
Some argue that the telescope would obstruct the scenic viewplane, while others are concerned that the construction will cause ecological damage, particularly to the Mauna Kea aquifer. In 1998, a judge found that the University of Hawaii was putting scientific research on Mauna Kea ahead of protecting the site's natural resources. Some activists are hesitant to trust the university now, even though the school says extensive research shows that TMT is no risk to the aquifer.

The view from the summit of Mauna Kea.

In terms of scientific research, TMT provides unparalleled opportunities.
TMT would allow astronomers to see 13 billion light-years away and the "forming galaxies at the very edge of the observable Universe, near the beginning of time," according to the project's website. 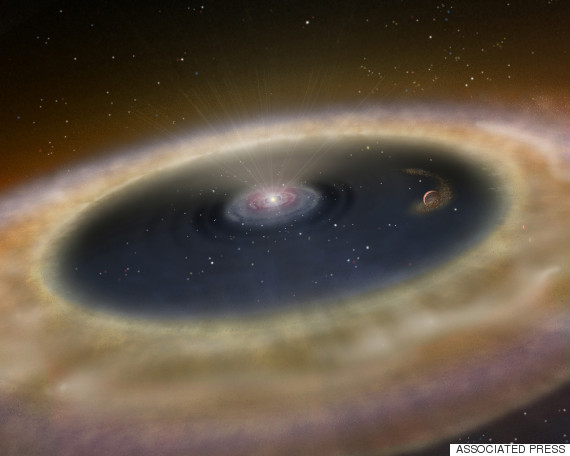 An artist's rendering of a new planet forming around a star. Keck telescopes on Mauna Kea found the planet, which is 450 light years away from Earth and is being built by dust and gas.

TMT would also benefit the University of Hawaii and the state of Hawaii.
While the state owns the land, the University of Hawaii has a 65-year lease for most of the area above an elevation of 12,000 feet. While UH doesn't benefit financially from the telescopes, its Institute for Astronomy enjoys a global reputation because of the Mauna Kea Observatories. The project is also expected to create 300 construction jobs and up to 140 permanent jobs on the island. 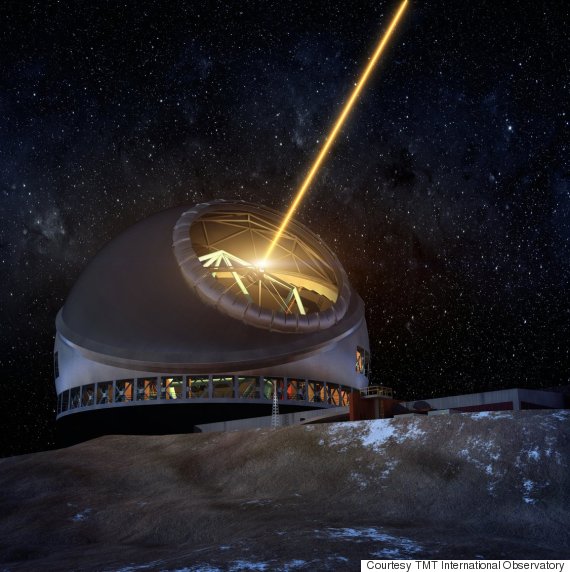 But even some scientists feel conflicted about the current debate.
Using the hashtags #DecolonizeSTEM and #DecolonizeAstronomy on Twitter, many scientists weighed in about their conflicted emotions regarding TMT. The project “is predicated on this idea that we have some permission to take over these spaces and use them for scientific research,” Adam Burgasser, an associate professor of astrophysics at the University of California, San Diego, told BuzzFeed. “Even though I benefit greatly from that professionally, I don’t think we can make that assumption that we have rights to this mountain," he added.

Astronomer and professor Emily Rice, a resident research associate in the Department of Astrophysics at the American Museum of Natural History, weighed in from New York City.

"It's hard to admit something you've benefited from is harmful to others," she wrote on Twitter. "But once you know, it's wrong to minimize or ignore it."

Protesters first made news when they intervened in October of 2014.
The Hawaii Board of Land and Natural Resources officially approved the site for TMT in April of 2013, but nonviolent protesters showed up to block the access road at the site's groundbreaking ceremony in October, 2014. 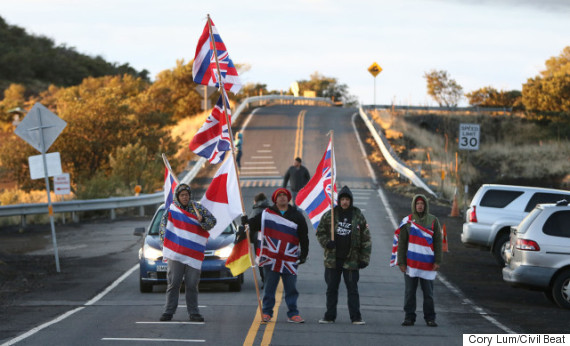 Protests then picked up again in March of 2015, when construction was set to begin.
Demonstrators blocked access again when construction crews showed up to begin work. By the beginning of April, thousands of protesters had gathered across the Hawaiian islands and more than 30 people were arrested at the Mauna Kea summit.

The conflict had an emotional impact on many in Hawaii, including some of those making the arrests.

Soon after, celebrities like Jason Momoa, Kelly Slater and Ian Somerhalder helped make the protests go viral.
Using the hashtag #WeAreMaunaKea, several celebrities have helped the demonstration go viral across social media. Many in opposition are writing "We Are Mauna Kea" on their bodies and posting photos on social media, asking friends to sign a Change.org petition. So far, more than 40,000 people have signed the petition to Gov. David Ige (D) to "stop TMT Construction and Arrests of Mauna Kea Protectors."

University of Hawaii Manoa students also organized a protest on campus.
Hundreds of students gathered to build an ahu, or shrine, out of stones. UH spokesman Dan Meisenzahl said the university is respecting the demonstration and has no plans to remove the ahu.

The opposition is nuanced and part of a larger dialogue in Hawaii.
After statehood, there was unprecedented development in Hawaii, and as a result, many residents don't trust the state government to protect or preserve the land (in Hawaiian, the 'aina).

Moreover, while many protesters object on religious and spiritual grounds, some see the issue as part of a continuing struggle to regain Hawaiian sovereignty.

And not all Native Hawaiians see the telescope as sacrilege.
Some Native Hawaiians are pointing out that their Polynesian ancestors are best known for being celestial navigators -- and that a device that allows Hawaii to see the stars better than anyone else is a fitting tribute to their culture.

"I'm one of the Hawaiians that really believes that this is something that we should really take over," said astrophysicist and Native Hawaiian Paul Coleman. 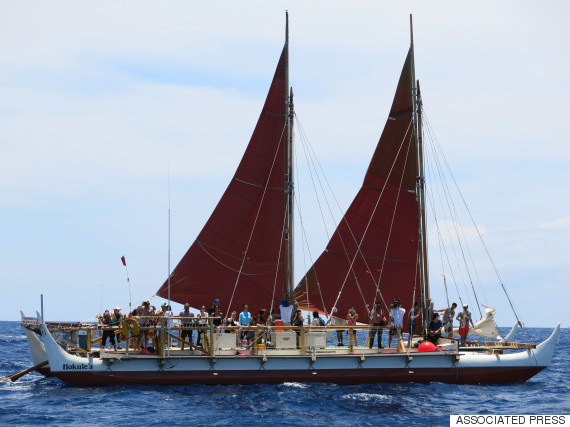 The Hokulea is a replica of ancient Polynesian sailing canoes; it has no modern instrumentation.

The project has already been through a seven-year public vetting process.
The back-and-forth over the TMT project has been extensive. In the end, the process ensured there would be strict conditions imposed for future telescope projects on Mauna Kea and that TMT will be the last new telescope constructed on Mauna Kea, with future telescopes limited to the footprint of existing facilities. Additionally, the TMT project has committed $1 million per year for developing a local workforce through financial aid and research opportunities and another $1 million per year for Hawaiian-specific programs. 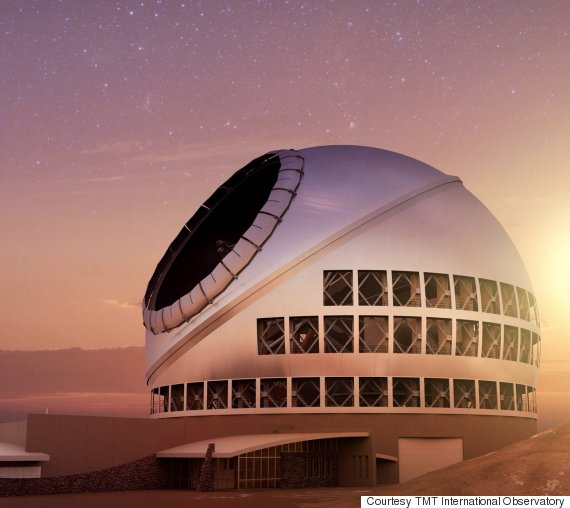 Nevertheless, the recent protests reached such a fever pitch that Gov. David Ige called a "timeout" on April 7.
The governor paused construction for one week "to give us some time to engage in further conversations with the various stakeholders that have an interest in Mauna Kea and its sacredness and its importance in scientific research and discovery going forward," he told local reporters. On Saturday, April 11, Ige extended the moratorium until Monday, April 20. 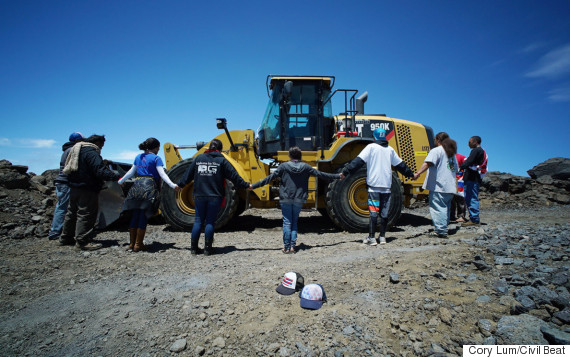 Protesters at the TMT construction site on the summit of Mauna Kea on April 10, 2015.

So what's next?
The protesters are hoping the case makes it to the State Supreme Court, but TMT organizers argue that they have full legal authority to continue construction.

The project is slated to be completed by 2024, at roughly the same time as the 39-meter European Extremely Large Telescope being built in Chile. 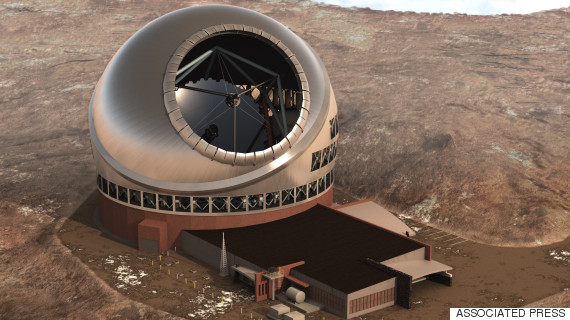