It turns out Hawaii is a land of fire and ice.

In addition to having mesmerizing lava that draws hundreds of thousands of visitors each year, Hawaii's Big Island is home to a surprising, rarely seen and extremely fragile geological phenomenon: lava tube caves with permanent ice.

Few people realize these icy underworlds exist -- and, according to a recent study, they might not be around for much longer.

Like Earth's polar ice caps and glaciers, at least one of these remote ice caves is melting at an alarming rate, and unsurprisingly, scientists say the most likely culprit is climate change.

Norbert Schörghofer, a researcher and planetary scientist at the University of Hawaii, was studying permafrost on the Big Island's Mauna Kea when he first heard about ice caves on nearby Mauna Loa -- the world's largest active volcano.

"I followed up on these rumors and spent a lot of time tracking down whether they exist," he told The Huffington Post.

In November 2011, he and a small team, including Stephen Smith, a cave researcher and chair of the Hawaii Speleological Survey, finally relocated one of only two known ice caves on Mauna Loa, simply called "Mauna Loa Ice Cave."

Hawaii's high-elevation cave systems can be home to perennial ice because of the way air circulates inside of them.

"As long as temperatures remain cold enough, there will be ice," he said.

But the Mauna Loa Ice Cave is losing ice at an alarming rate, according to Schörghofer and Smith.

From 2011 to 2014, their team made periodic visits to the remote cave to monitor temperature, humidity and ice levels. By comparing their own data to a survey conducted in the late 1970s, they found a "significant volume of ice has been lost" over the last three decades, including the disappearance of a 2,800-square-foot ice floor, described as a "skating rink."

In their study, published in the journal Arctic, Antarctic, and Alpine Research, the team writes there's been a trend of warming temperatures measured at nearby Mauna Loa Observatory, suggesting the retreat of ice at Mauna Loa Ice Cave "may be due to climate change."

Another possible factor, Schörghofer said, is drought conditions on the island.

Mauna Loa Ice Cave and Arsia Cave -- a second ice cave, discovered by Smith in 2009 -- are both more than 11,000 feet up on the 13,680-foot-tall mountain's north flank. (With an annual mean temperature of 33.3 degrees Fahrenheit, Arsia is the coldest known place in Hawaii.)

The lava flows that created the caves are between 200 and 1,500 years old, which means the ice inside them could potentially contain biological matter dating that far back.

Scientists hope that by studying the rare cave ice, they might uncover clues about past environmental conditions on the island.

"The massive ice lakes may contain a climate record, and, given the lack of other century-scale paleoclimate records in the Pacific, they are potentially extremely valuable scientifically," Smith and Schörghofer wrote back in 2012. "Moreover, the ice caves on Mauna Loa are the world's most isolated ice caves, and thus interesting in terms of microbial communities."

Studying the cave ice could also have cosmic implication by shedding light on the development of microorganisms on Mars.

"Ice-filled lava tubes on Mauna Loa," the study states, "illustrate that cave ice can be found in extreme geographic isolation, and in geologic environments similar to those of Mars, where many lava tubes have been observed."

In addition to being dangerous and difficult to access, Hawaii's ice caves are extremely vulnerable, making them off limits to the general public.

"Given the delicate nature of (Mauna Loa Ice Cave) and the risk of body heat causing additional melting, this cave is closed to visitation except for the bare minimum needed to access and download data from scientific devices," Smith told HuffPost.

Schörghofer considers himself fortunate to be one of the few people to experience Mauna Loa's wondrous ice caves first-hand.

"I never in my life expected that I'd be studying new places, new field sites, on Earth," he told HuffPost. "I thought they'd all already been explored."

Today, the race is on to understand these marvelous places -- before they disappear.

There's A Massive, Icy Underworld Hiding INSIDE One Of Hawaii's Volcanoes
Amazing Caves 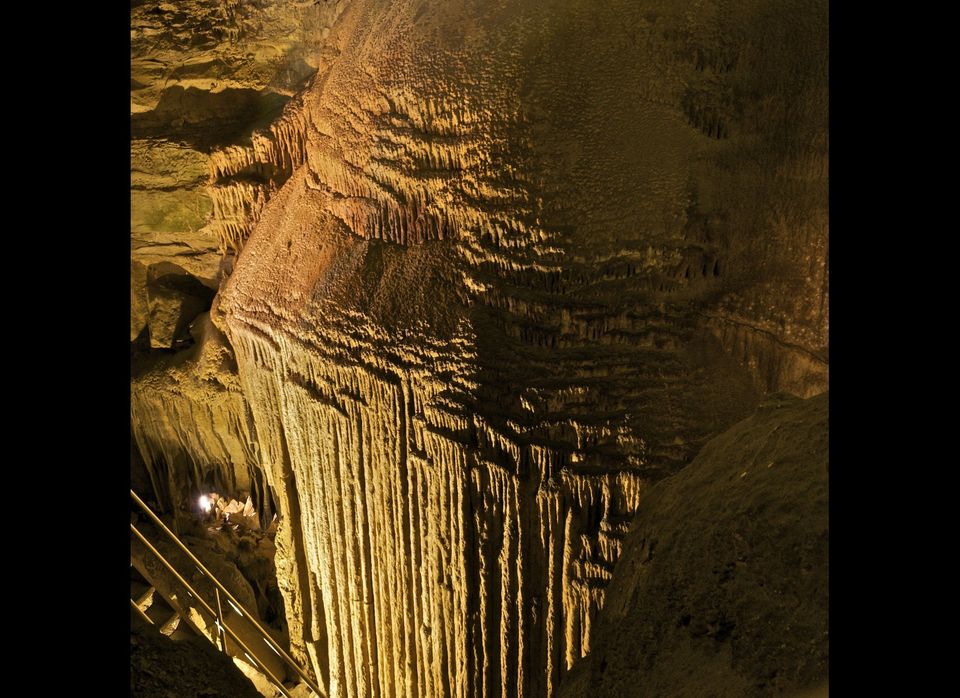 1 / 17
Think Big
Hint: It's been called a "grand, gloomy and peculiar place" by one of its first explorers and at 390 miles of explored area, it's the longest known cave system in the world.
Flickr:Peter Rivera