Kamilo is a 6-month-old Hawaiian monk seal, and what an eventful 6 months it has been.

Kamilo was only trying to play, but officials from the Marine Mammal Center had no choice but to capture Kamilo and remove him from the waters where he had grown accustomed.

This weekend, despite a government shutdown that left the National Oceanic and Atmospheric Association (NOAA) significantly disabled, a volunteer army of veterinarians and biologists helped relocate Kamilo from the Big Island to Niihau in the hopes that his interactions with humans would be less frequent and he would have a better chance of survival.

Kamilo’s survival is important since Hawaiian monk seals are critically endangered. They are the second-most endangered marine mammal in the United States, and their numbers continue to decline.

1. Hawaiian monk seals are only found among the Hawaiian Islands. They are thought to have existed for millions of years and at one point to have had a population in the tens of thousands. Today, only about 1,100 Hawaiian monk seals are alive, roughly 900 in the remote northwestern Hawaiian Islands, and only 200 in the populated islands. On the remote islands, monk seals are starving from lack of fish and are being eaten by sharks. On the main islands, the dangers are man-made: ingesting fish hooks, getting caught in nets, and being run over by motor boats. A slew of “assassinations” even prompted a New York Times Magazine piece on why monk seals were being mysteriously murdered across the islands. 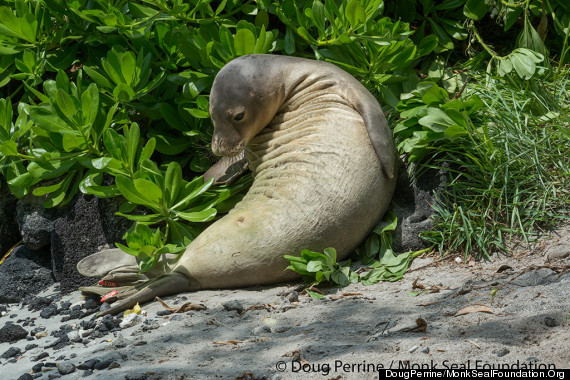 2. After birthing all her other pups on Molokai island, Kamilo's mother swam all the way to the Big Island to give birth to Kamilo on April 10, 2013 in Kaiole Bay. As is Hawaiian custom, Kamilo was given his name by the kupuna (elders) of the region in which he was born. After about 6 weeks, his mother left him, and Kamilo set out alone, swimming along the Big Island shore. 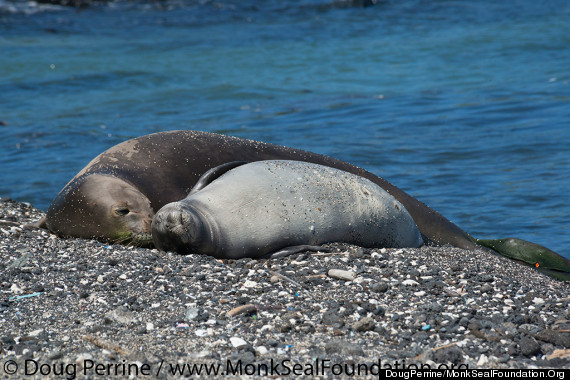 3. The NOAA uses bleach marks to identify monk seals. Using Clairol hair dye, NOAA snuck up on Kamilo while he was sleeping and painted his tag -- H-05 -- in his fur. In addition to the NOAA, Kamilo is looked after by volunteers from the Monk Seal Foundation and the Marine Mammal Center. 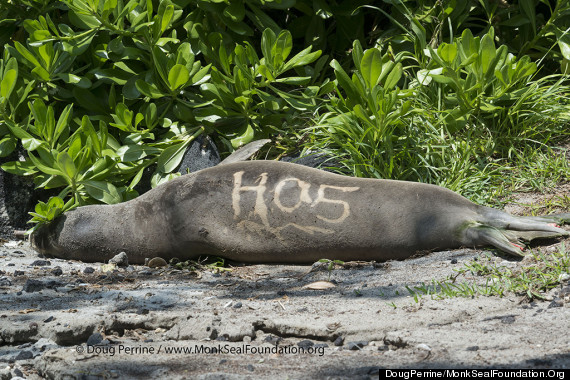 4. But volunteers can’t watch Kamilo’s every move. The first year of his life is the most crucial – newborn monk seals have only a 20% chance of survival. When the pups' mothers leave them, they crave affection. They will try to hug sea turtles, branches, even humans if they have the chance. Seal pups must socialize with other pups in order to learn important survival skills. Proper interaction with each other also ensures their ability to breed later on. But Hawaiian monk seals often come into contact with humans -- who either don’t know better or don’t care -- and who play with, feed or harass the seals. Feeding seals is the worst thing one can do for them, as they must learn to fend for themselves. 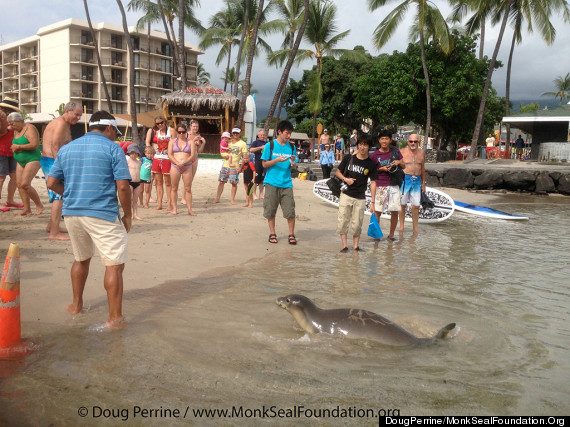 5. Protected under the Endangered Species Act, harming a monk seal can result in a $50,000 fine and a one-year imprisonment. Admittedly, it’s hard to leave the seal pups alone (they’re adorable), but if monk seals don’t learn to fear humans, they won’t adjust properly to their wild existence. Which is what happened to Kamilo. Last week, he was seen following paddle boarders and swimming up to humans, who engaged with him. As Kamilo grew braver and more desensitized to humans, he began to follow two triathletes preparing for the Ironman World Championships. Attempting to engage in play, Kamilo circled and nipped both of them as they were swimming. 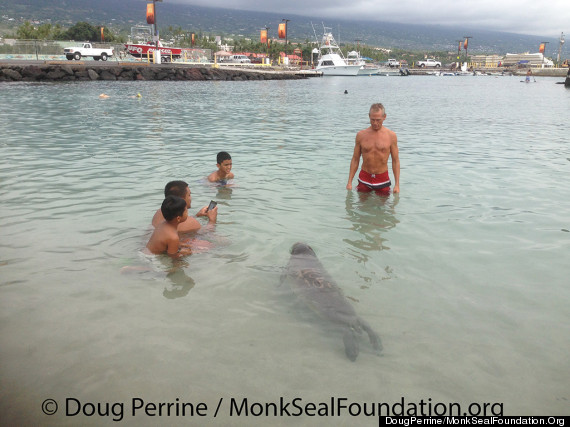 6. According to NOAA scientist Charles Littnan, nipping, wrestling, scratching or biting are all “play behaviors.” But Kamilo will grow to be 400 pounds, at which point his play won’t be safe for humans or for him. After hearing of the bites, the Marine Mammal Center dispatched two biologists and a veterinarian to find Kamilo. He posed a danger to himself and others, and with 2,000 triathletes descending on his home waters for the weekend Ironman competition, time was of the essence. 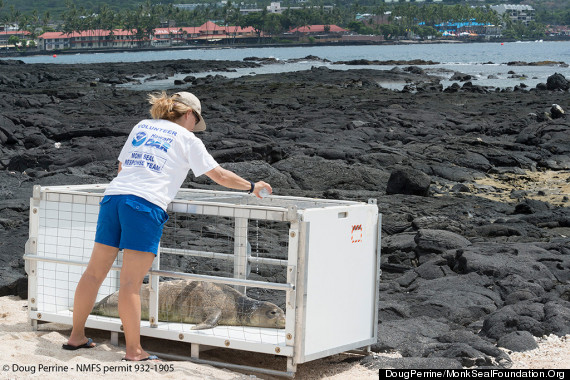 7. They kept Kamilo in a pen until it could be determined what would be best for him and for the monk seal population at large. The decision-making process was significantly hampered by the fact that the government shutdown meant NOAA workers were furloughed -- not even an official press release was written. The decision was complicated: too many humans were interacting with Kamilo on the Big Island. On the other hand, it was the only home he knew, and monk seals that had been relocated to far away islands had disappeared after their re-release. One seal got lost and swam hundreds of miles into the open ocean after being dropped off near a northwestern Hawaiian Island. So while scientists debated what to do, Kamilo waited. 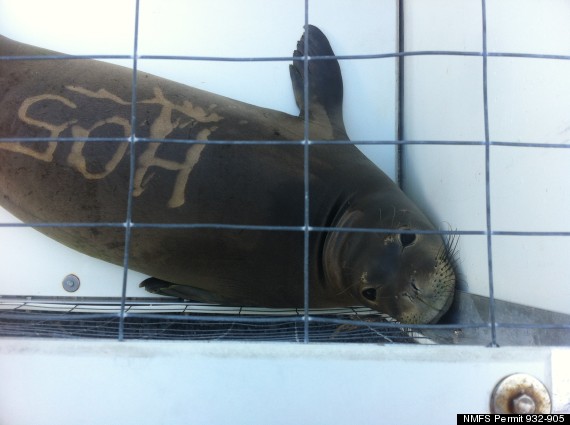 8. On the evening of Friday, Oct. 11, Kamilo was transported by plane and helicopter to his new home, the tiny island of Niihau near Kauai. Privately owned since 1864 and only 72 square miles in area, Niihau is sparsely populated by a native Hawaiian population and is not open to outside visitors. Kamilo’s new home has between 50-100 monk seals, 16 of which are pups, which means his chances for socialization could be better than they were on Big Island. The hope is that Kamilo will be able to interact with other seal pups here, and to perhaps rest, away from the distractions of humans. 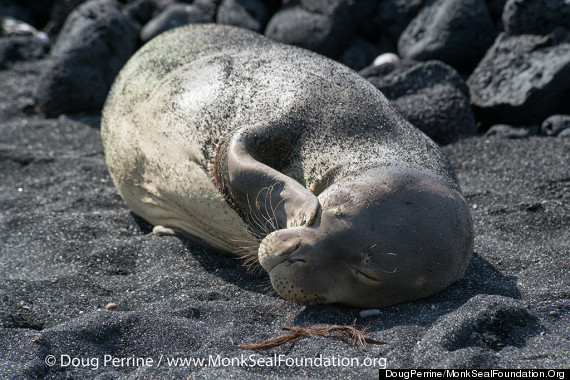