"Soldier. Veteran. Surfer. Member of Congress. Doing my best to be of service." 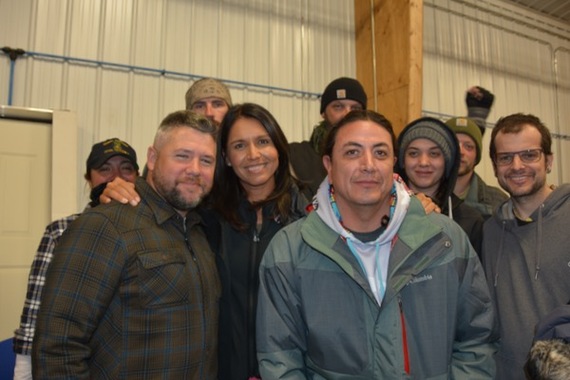 U.S. Congresswoman Tulsi Gabbard's (D-HI) Twitter handle is an accurate summation of the unpretentious woman who stood before 400 Veterans and Water Protectors at Sitting Bull College in Fort Yates, North Dakota. It was a frigid Dakota Saturday night, and you could have heard the proverbial pin drop echo against the metal walls as she addressed the crowd. Gabbard served two tours of duty in the Middle East, and she continues her service as a Major in the Army National Guard. In 2005 she completed a 12-month tour in Iraq, where she served in a field medical unit as a specialist with a 29th Support Battalion medical company. Gabbard was awarded the Meritorious Service Medal at the end of the tour.

The vets were proud to have one of their own in a visible leadership role. It was written on their faces and obvious in the occasional tear that was quickly wiped away. 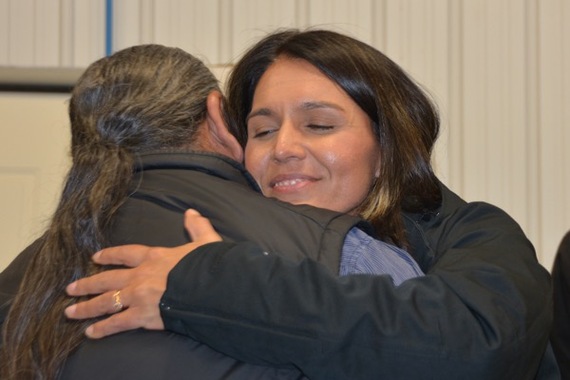 In a show of solidarity with the Standing Rock Sioux, Congresswoman Gabbard is joining thousands of veterans from across the United States who have come to Standing Rock and the Cheyenne River Sioux Reservation to protest the building of the Dakota Access Pipeline (DAPL). The pipeline, if approved by the U.S. Army Corps of Engineers, would cross under the Missouri River and threaten not only the water supplies of Standing Rock, but also that of the Cheyenne River Sioux to the south.

In a statement to the Oceti Sakowin Camp Gabbard said, "I'm participating in the Dakota Access Pipeline protest because of the threat this project poses to water resources in four states serving millions of people."

Addressing the universal issue of water quality, Gabbard said, "Whether it's the threat to essential water sources in this region, the lead contamination in Flint, Michigan, or the threat posed to a major Hawaii aquifer by the Red Hill fuel leak, each example underscores the vital importance of protecting our water resources."

In recent days, Gabbard met with President-elect Donald Trump and his transition team last Monday. Sources say she is possibly being considered for positions in the "Defense Department, State Department and the United Nations," according to a CNN report.

"Veterans for Standing Rock," are assembling at the Standing Rock Reservation from December 4-7 to relieve the water protectors from the harsh winter conditions and the constant emotional pressure and presence of militarized law enforcement.

"We are veterans of the United States Armed Forces, including the U.S. Army, United States Marine Corps, U.S. Navy, U.S. Air Force and U.S. Coast Guard and we are calling for our fellow veterans to assemble as a peaceful, unarmed militia at the Standing Rock Indian Reservation on Dec 4-7 and defend the water protectors from assault and intimidation at the hands of the militarized police force and DAPL security," the organization said.

News reports of Morton County's use of the same weapons on Americans that veterans used against terrorists in Afghanistan and Iraq have mobilized the veteran's community, including Wesley Clark, the son of Gen. Wesley Clark. Clark has been instrumental in fundraising for the group. So far they have raised over $1 million.