The father of a missing teen who was last seen in the company of a sex offender with a lengthy criminal history, said his worst fear is that his daughter will be "cut up" and left for dead.

"It's terrifying to know that she is with a pedophile," Eddie Wilson told HLN host Nancy Grace on Monday night. "I have so many thoughts in my head."

"We issued an AMBER Alert out of immediate concern for Hayleigh’s well-being," Tennessee Bureau of Investigation spokesman Josh DeVine told The Huffington Post. "Since then, law enforcement agencies from across the region have worked together to pursue all available leads in the effort to find her."

Authorities said Wilson left her Surgoinsville home in her stepfather's truck and drove to nearby Morristown, where she met up with Shook.

According to WJHL News, Shook's lengthy criminal record includes arrests for child molestation, enticing a child for indecent purposes and sexual exploitation of children. In September, a federal warrant was issued for Shook's arrest for failure to register as a convicted sex offender. 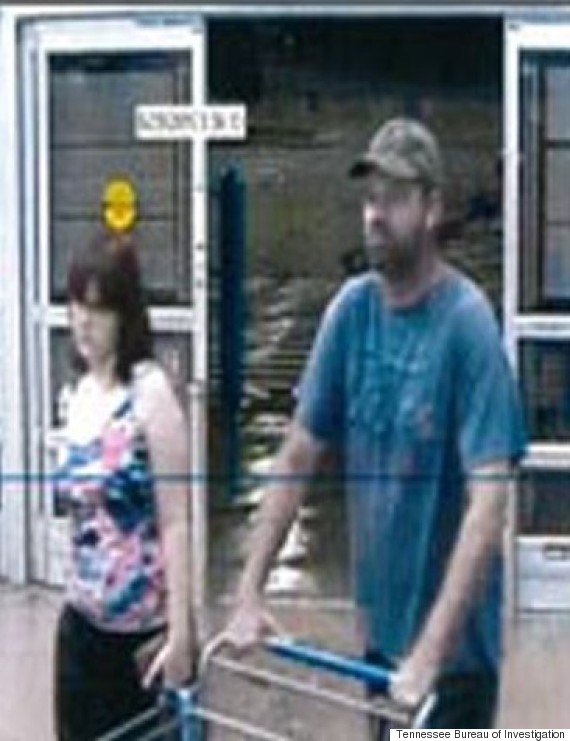 Shook and Wilson at Walmart.

Authorities received confirmation Shook and Wilson were together on June 23, when the pair was captured on video surveillance at a Walmart in Marion, North Carolina, where they attempted to purchase camping supplies with a credit card belonging to Wilson's stepfather. The card was declined and later that day they were again captured on video at a convenience store in Grayson County, Virginia.

On June 25, Wilson's stepfather's truck was found abandoned in Grayson County. Investigators said an unsuspecting driver picked up Shook and Wilson and gave them a ride to an area near Raccoon Branch Campground in Sugar Grove, Virginia.

The Tennessee Bureau of Investigation suspects Shook and Wilson are now traveling on foot and may be in Virginia's Jefferson National Forest, along the Appalachian Trail.

Eddie Wilson told Nancy Grace authorities have concentrated search efforts in a 12-mile area that contains a number of cabins.

"Maybe they're in one of these cabins ... where they can stay out of the weather," Wilson said.

The concerned father said he is "hoping for the best."

Shook was last seen wearing a blue shirt with "Ford" written on it, dark shorts and a camouflage baseball hat. He has multiple tattoos.

Wilson, who has black hair and hazel eyes, is 5 feet 5 inches tall and 150 pounds. She was last seen wearing a sleeveless flowery top with dark pants.

Anyone with information is asked to contact Surgoinsville police at (423) 272-7121 or the Tennessee Bureau of Investigation at 1-800-TBI-FIND. The United States Marshals Service is offering a $5,000 reward for information leading to Shook’s capture.

CORRECTION: A previous version of this article stated that the pair was seen in Marion, Virginia. The footage from Walmart was taken in Marion, North Carolina.

Hayleigh Wilson Missing: Teen's Father 'Terrified' She's With Sex Offender
Cold Cases
1 / 18
El Dorado Jane Doe
We know who killed her. But we still don&rsquo;t know her name. That is the enduring mystery that has left investigators stumped for more than two decades. Despite the passge in time, authorities beleive someone, somewhere, can still help solve the identity of the woman known as El Dorado Jane Doe.<br><br><strong>READ:</strong>&nbsp;<a href="https://www.huffpost.com/entry/eldorado-jane-doe_n_56e6d679e4b0b25c918276a3?x3l3di" target="_blank">We Know Who Killed Her. But 24 Years Later, We Still Don&rsquo;t Know Her Name</a>
El Dorado Police Department