Isis the pit bull is credited with protecting her owner, Jaimie Kraczkowski, from an abusive boyfriend -- and right after, got kicked out of town due to the city's ban on dogs of her kind.

Some two months later, and after a massive public outcry, Hazel Park, Michigan, is lifting its proscription on blocky-headed pups.

"We are really excited," said Courtney Protz-Sanders, director of Michigan's Political Action Committee for Animals, a group that advocated for this change. "We're happy."

The city is no longer enforcing its pit bull prohibition, and is allowing residents to register their pits, while alternative dog laws are under consideration.

Protz-Sanders said her organization is now working to ensure that any new laws aren't overly onerous toward pit bull owners -- and in the meantime, she said, Hazel Park residents with pits "are at least able to breathe a sigh of relief." 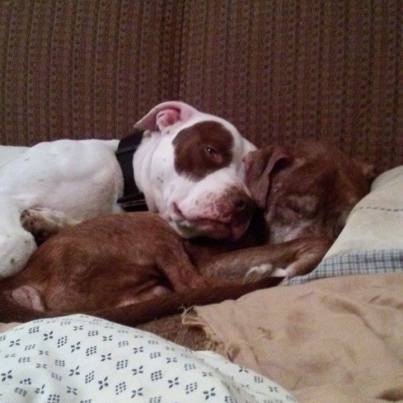 One of those breathing easier is Mike Toma.

Toma has two pits -- Puppy, who is 15 years old, and Diesel, who is 2 -- and received a notice from the city not long after Kraczkowski's story went public, saying he had five days for his dogs to be removed from town.

At the time, Toma vowed to stay with his dogs and to protect them. But he also worried about his own limitations.

"I'm not in a financial position to pick up and move," he said. "I just feel this is very wrong."

"But, I'm very happy we were able to get the ban lifted. It's definitely a step in the right direction," he said, adding that, through all this, his dogs seemed completely unaware of being caught up in any danger.

"I don't think they were too worried," he said.

Kraczkowski's ex-boyfriend, Jamie Dopke, pleaded no contest to domestic abuse charges on March 19, and is currently on probation, the Hazel Park clerk of court's office confirmed to HuffPost.

As for Kraczkowski and Isis: they are together, safely, in a brand new town.

"We have moved out of Hazel Park," she told HuffPost. "We are doing great."