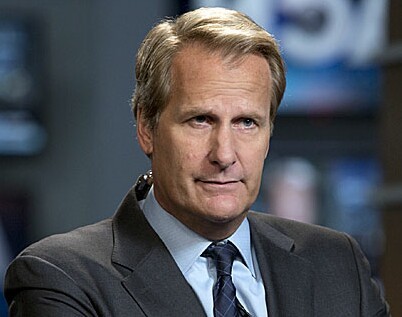 The third and final season of HBO's The Newsroom begins on Sunday. It's an abbreviated run with a total of only six new episodes before the end. If the second three are as entertaining as the first, second and third, which HBO provided for advance review, the end of this show will not be especially welcome.

Tellingly, the first three episodes -- which begin with a mad scramble to accurately report on the April 2013 bombings at the Boston Marathon, careen through the early stages of a hostile corporate takeover and set a number of characters on a collision course with the federal government -- play like the opening half of an extremely satisfying three-hour movie that moves so quickly it feels more like 90 minutes. (They also include tasty little sub-plots about the hazards of hasty tweeting and the blowback from office romances.) The speed factor is hardly surprising -- Aaron Sorkin, who created and writes the series, has never developed a project for screens large or small that has dragged. Even those rare efforts that weren't very good (Studio 60 on the Sunset Strip comes to mind) never suffered from a lack of dramatic momentum.

The Newsroom is the first series I can think of that takes place squarely in the recent past (a year or more before the year in which each season has debuted). This unique structure allows the characters to respond to real-life events without the show coming off as if it is exploiting major news stories, many of them tragic. Too many critics have crabbed that the permanent flashback in which the series operates allows Sorkin to unfairly criticize what happened, lazily bloviate about what should have happened and somehow take the easy way around addressing real-life stories large and small. That's a bunch of bunk.

There is nothing wrong with Sorkin having done what he did in the name of insightful entertainment. The Newsroom isn't a news or documentary program; it's a serialized drama that is as much a high-gloss soap opera as anything else. Watching the producers, reporters and anchors at the fictional Atlantis Cable News network react to true stories we all remember well even as they deal with their own completely fictional personal and professional life challenges is an engaging experience unlike any other I can think of, except perhaps certain legal dramas produced by the great David E. Kelley, who similarly merged fact and fiction with distinctive skill on such series as The Practice and Boston Legal.

Yes, the relationship flips and flops that many of the characters on the Newsroom canvas seem always to be caught up in are rather repetitive, perhaps because Sorkin tends to write almost all of his characters in the same way. They're all smart and snarky and given to reference-rich hyper-babble. In other words, they talk too much. Sorkin did a better job of keeping such excessive dialogue in check during his years on The West Wing than he has done here, but I just accept his lack of editing as one of the many unusual quirks about The Newsroom that consistently hold my attention.

The thing I like best about this show is its sublime ensemble. The primary cast is just grand -- Jeff Daniels as controlled, sometime blowhard Will McAvoy, the star anchor at ACN (a role that earned Daniels an Emmy); Emily Mortimer as MacKenzie McHale, his equally motor-mouthed producer and fiancé; Sam Waterston as Charlie Skinner, the wise, weary, hard-drinking head of the network; Thomas Sadoski and John Gallagher Jr. as Don Keefer and Jim Harper, respectively, producers at different experience levels; Olivia Munn as Sloan Sabbith, a genius economist and financial news anchor; Alison Pill as Maggie Jordan, an eager young news associate, and Dev Patel as Neal Sampat, a young technical wizard and news gatherer. 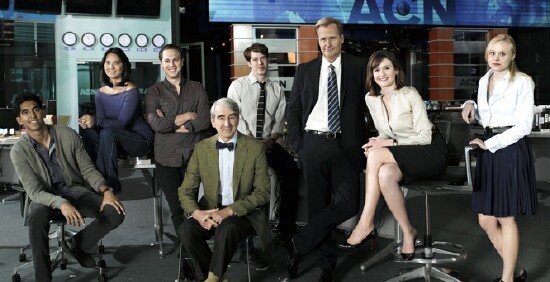 The recurring cast is equally splendid, especially Jane Fonda as bombastic Leona Lansing, head of the corporation that owns ACN; the always terrific Chris Messina as her insecure son Reese, the president of the parent company, and Marcia Gay Harden as Rebecca Halliday, the brilliant attorney who represents the network. Fonda, in fact, dominates every scene she is in, regardless of who she is sharing it with. Her fiery, mercurial performance as Leona has been wildly entertaining from the start, but is especially fun in the third season, in which Leona finds herself in a fight to save her company from two scheming young relatives (twins, actually) who are set to take control of it upon reaching their 25th birthdays. One of the terrible twosome is played by Kat Dennings of CBS's silly sitcom 2 Broke Girls. You might assume that Dennings' inclusion here is risky casting. If so, you would be wrong. She's just great in a role that could have easily deteriorated into a cartoon character, truly holding her own against the magnificent veterans around her.

Sorkin has the advantage of viewing reality in the rear-view mirror as he writes this show, so let me indulge in similar hindsight conclusion-making. I think that from the beginning The Newsroom would have been a stronger show if its seasons had been limited to only six episodes, absent some of the filler necessary to produce 10 (in season one) or nine (in season two) with a cast this expansive and characters so richly drawn that must be satisfyingly served. Less would have been more, although I don't think that phrase is in Sorkin's lexicon. (I understand scripts for each episode of this series are considerably longer than average. I have no first-hand knowledge of this, but given the fact that his characters never shut up or even come up for air it is not difficult to believe.) Six feels like just the right amount to entice fans while also leaving them hungry for more.

Regardless, the hurried passing of this fine show, which should have been with us for several more years, is a loss for television. Any series that thoughtfully and consistently deconstructs any area of the mainstream media is a show worth embracing.

This column was originally published in the Planet Ed blog at MediaBizBloggers.