Write the story of your own life in text, pictures and videos for free at OurPaths.com 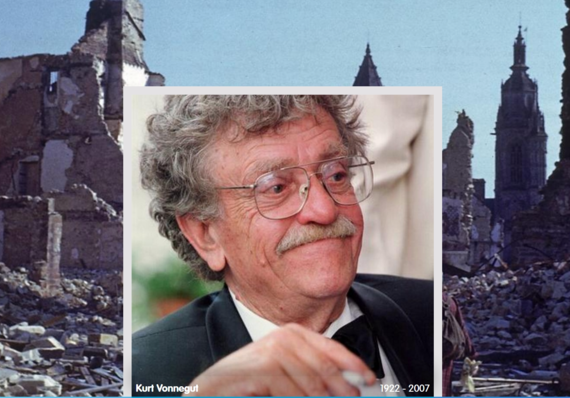 "Tiger got to hunt, bird got to fly;

Tiger got to sleep, bird got to land;

Man got to tell himself he understand."

His books were a siren song for the youth of the '60s and '70s, written with a voice at once cynical, melancholy and darkly humorous. On the ninth anniversary of his death this week, fresh interest is building in the bitingly comic author - followers have launched a drive to fund a new library and a top screenwriter is working to bring "Cat's Cradle" to television.

Kurt Vonnegut Jr. was born on November 11, 1922, in Indianapolis, Indiana, a city he would later use in his novels as a symbol of American values - and as counterpoint to the unspeakable horrors of war he portrayed. He died on April 11, 2007, after a fall on the steps of his New York brownstone.

His father, Kurt Sr., was one of the most prominent architects in the city, and his mother, Edith, was the daughter of a wealthy Indianapolis brewer. Kurt Jr. was the youngest of their three children, along with middle child Alice and first-born Bernard. 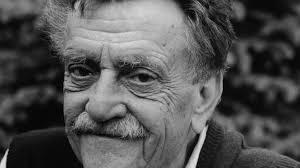 The fortunes of the family changed dramatically during the Depression when Kurt Sr. saw his architectural business disappear. He had to sell the family home and take young Kurt out of private school, the Orchard School where, in kindergarten, Kurt had met Jane Cox, who eventually became his wife.

This radical change in economic circumstances caused Kurt Sr. virtually to give up on life and Edith to become addicted to alcohol and prescription drugs. Kurt Jr.'s lifelong pessimism clearly had its roots in his parents' despairing response to being blindsided by the Depression.

His work seems to be gaining fresh interest.

"He's one of the most inventive stylists of American novelists. He mixes genre from science fiction, he jumps around in time, he mixes tone--his books are very comic, but they're also very morally serious."

- Noah Hawley, writer of the series "Fargo" and the upcoming "Cat's Cradle"

Meanwhile, a Kickstarter campaign has been launched to preserve his papers in the new home for the Kurt Vonnegut Library.

Noah Hawley wrote the screenplay for the TV series Fargo and has taken on "Cat's Cradle," bringing the fictional story about the man who dropped the atomic bomb on Hiroshima to FX TV in four or five two-hour parts. No release date has been set.

In high school, Vonnegut wrote for the student paper, "The Echo," and he continued his interest in journalism at Cornell, becoming managing editor of the student paper, "The Sun." Vonnegut would be influenced all his writing life by the simple rules of journalism: Get the facts right, compose straightforward declarative sentences, know the audience.

Vonnegut in high school in Indiana

When World War II broke out, Vonnegut was 16; at 20, he entered the army and was shipped off to Europe, where he almost immediately was captured by the Germans in the Battle of the Bulge.

He was sent as a POW to Dresden. On February 13, 1945, British and American bombers destroyed the city by dropping high explosives followed by incendiary bombs. The resulting firestorm turned the non-militarized city into an inferno that killed up to 60,000 civilians.Vonnegut and his fellow POWs survived by accident only because they were housed some 60 feet underground in a former meat locker and slaughterhouse.

Clip from his 1972 movive Slaughterhouse Five

Vonnegut's job for weeks after the bombing was to gather up and burn the remains of the dead. His experience at Dresden marked him for life and eventually resulted in his literary masterpiece, "Slaughterhouse-Five."

After the war, Vonnegut married Jane Cox. They had their first child, Mark. Vonnegut took an advertising job at General Electric to support his family and began writing short fiction on the side.When two more children arrived, Edith and Nanette, Vonnegut redoubled his efforts to publish his stories.

In 1952, his dystopian apprentice novel "Player Piano" was published. Vonnegut's beloved sister Alice Adams died of cancer in 1957, just two days after her husband had been killed in a freak commuter train crash. Kurt and Jane took in three of Alice's children, doubling the size of their family overnight. It became more imperative for Vonnegut to bring in more money. 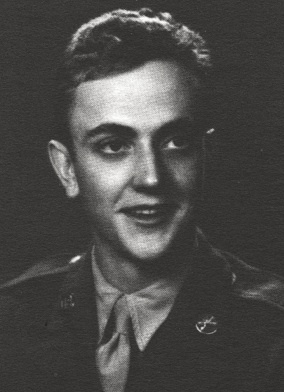 Within 10 years following the arrival of the Adams boys, the short-story market was drying up and Vonnegut turned his attention to novels. He published the whimsical sci-fi epic "The Sirens of Titan," the spy novel "Mother Night," the fanciful anthropological satire of religion "Cat's Cradle," a critique of economic injustice, "God Bless You, Mr. Rosewater" and, in 1969, his Dresden novel, "Slaughterhouse-Five."

In these books, Vonnegut mastered his trademark black comic voice, making his audience laugh despite the horrors he described. He had already developed a cult following of college students, but he broke through to a mass audience with "Slaughterhouse-Five" and the excellent film version of the novel that soon followed. By the early 1970s, Vonnegut was one of the most famous living writers on earth.

The 1970s proved a difficult time for Vonnegut. His children grew up and left home, and his long marriage to Jane fell apart. He moved alone from Cape Cod to New York City, became withdrawn and depressed and suffered from writer's block. His son Mark suffered a bipolar disorder early in the decade, but recovered to write a book about it called "The Eden Express."

Not surprisingly, the disintegration of families became a major theme in Vonnegut's two novels in the middle 1970s, "Breakfast of Champions" and "Slapstick." While not altogether successful as fiction, these books helped Vonnegut work through the emotional problems that had plagued him since childhood. 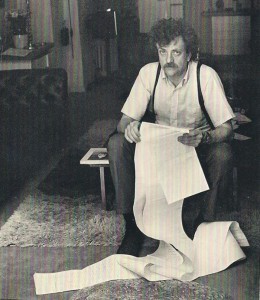 Vonnegut at work editing a manuscript

In the 1980s, Vonnegut entered a second major phase of his career. His 1979 marriage to photographer Jill Krementz formalized their relationship of several years, and the social realist novels "Jailbird," "Deadeye Dick" and "Bluebeard" showed a remarkable resurgence of Vonnegut's career after the critical backlash he had suffered in the 1970s.

Speaking for our freedoms

Throughout the 1980s and '90s, Vonnegut acted as a powerful spokesman for the preservation of our Constitutional freedoms, for nuclear arms control and for the protection of the earth's fragile biosphere. 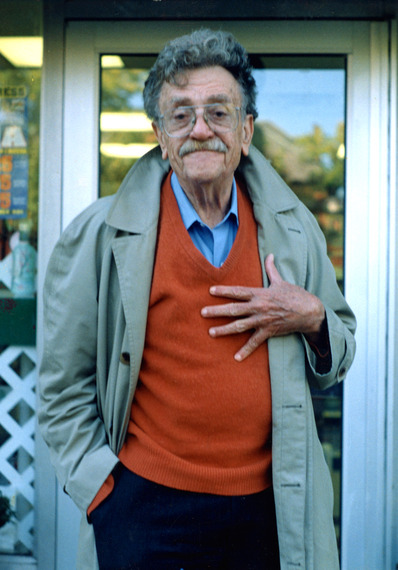 As the new century began, Vonnegut continued to try to be, as he said, "a responsible elder in our society," decrying the militarization of our county after the terrorist attacks of 2001.

In his last novel, "Timequake," and his last collection of essays, "A Man without a Country," Vonnegut powerfully expressed his sense that corporate greed, overpopulation and war would win out in the end over simple humanity.

As he ruefully apologized to those who would come after him, "We could have saved the world, but we were just too damned lazy."

OurPaths.com is a place to celebrate life. Join us.

To become a member of the Kurt Vonnegut Memorial Library go to http://www.vonnegutlibrary.org/