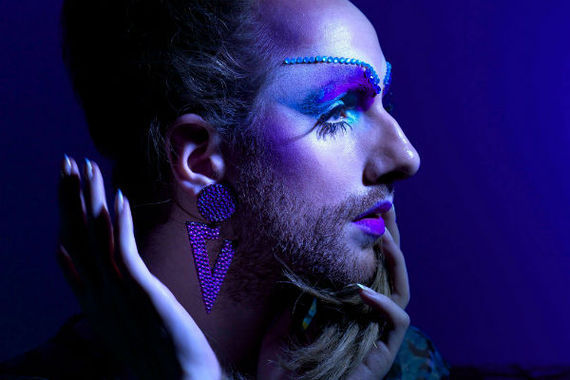 "So, Harry," I said, during a phone conversation last fall with my then 23-year-old son, "How come Facebook says you're my daughter?"

He burst out laughing.

Later I saw he had tweeted the question in quote marks attributed to me.

Sometimes I have to think through the ideas of gender identity and gender expression, even though my son has fallen somewhere on the trans* spectrum since he was two. That's when he told me, "Inside my head I'm a girl." Growing up, he wanted to wear clothes that society deemed appropriate only for girls, yet was happy with his assigned gender as a boy.

Oddly though, I didn't know the terms "gender identity," "gender expression" and "assigned gender" back then. It's vocabulary I've come to understand only in the past several years.

These days Harry, who self-identifies as genderqueer, describes himself as a trans-media artist, meaning he works across and between different mediums, including photography, performance and video. Amber Alert is his drag performance alter ego. Whenever I saw Amber, I'd think of her as "she." But without the wigs, body padding and makeup, I thought of my son as "he," even if he were wearing an Escada skirt with black pumps.

I figured Harry's use of feminine pronouns on Facebook was because he wanted to focus his social media profile on Amber, whose name appears in parentheses underneath his. But I'd noticed he and his friends often use pronouns interchangeably, whether in or out of drag. Pronoun usage was just confusing at times, and not only for me.

Harry stood, wearing a black jumpsuit with rhinestones embellishments. His hair was in a high ponytail. As the moderator approached with the microphone, she must have spotted Harry's cropped beard, because she said, "Oh, I mean he's got a question."

"That's okay," Harry assured her nonchalantly. "She or he, both work for me."

I wondered if Harry was so unruffled about being identified as female because it's been happening to him since he was 11. I remember chaperoning his fifth grade class on a museum field trip. Harry wore tie-dye then, and his hair was shoulder length. He raised his hand to ask a question and was called on as "the young lady in the back."

"I'M A BOY!" he retorted, much to the amusement of his classmates.

That night at BAM I realized that personal pronouns didn't matter to Harry. He'd told me he identifies as genderqueer because he consciously rejects the binary labeling of "man" or "woman." So it follows that he wouldn't care what pronouns other people use, because other people don't affect his identity.

I admire my son's outlook. He views himself as an individual first, as we all are, and he's chosen how he wants to be identified, as we should all have the freedom to do.

This week on Facebook I noticed that Harry is now my "child" and has a new gender pronoun.

"Harry, why is 'they' your pronoun now on Facebook?"

"Because it's the only non-gendered pronoun available."

I'd read about the pronoun "zie," and its corresponding "zir," "zimself" and "zirself" while Harry was in college.

"Those terms aren't really used that much, Mom. I think they have more of a liberal academic connotation."

"Really?" I asked, hinting at disappointment. "I kind of liked those new words."

I'd imagined them becoming part of everyday language, the way "Ms." had been revived in the '70s as a title for women to use with their last names instead of the only options "Miss" or "Mrs."

I have to admit I do like the pronoun "they" for Harry. It suits the individual he is, who identifies and expresses as both Harry and Amber. And as a mom with just one child, I feel lucky to have both a "son" and a "daughter." But the reality is that neither "he," "she," nor "they" perfectly encapsulates Harry or Amber. This may be frustrating for the purists out there, but practically speaking it makes perfect sense: people are more than their pronouns.