In the fall of his fifth year, my son started complaining of brief but blinding bursts of pain in his head, which the pediatrician diagnosed as tension headaches. My ex-wife was skeptical, but I believed the doctor, falling prey to the assumption that children exaggerate discomfort; I inherited my mother's gift for denial, which often cloaks itself as hope.

His headaches eventually hit a peak of twenty times a day. They interrupted his kindergarten activity so routinely that the school nurse began to prepare her small cot in advance for his many visits. Unusually independent and close to his own feelings, Evan developed a ritual of self-hypnosis to deal with the pounding in his head, and later, the tingling sensation in his arms and legs. 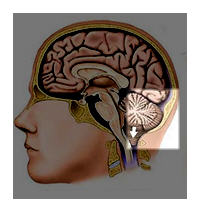 An MRI eventually revealed my son's problem: a condition called Chiari malformation. Layman's description: His brain was slightly too big for ther the back of his skull, constricting the critical flow of cerebrospinal fluid between brain and spine. The tingling was the result of a growing fluid-filled bubble in his spine called a syrinx, also caused by the constriction. Left untreated -- or unknown -- the syndrome could have caused paralysis.

We sent his films to five renowned pediatric neurosurgeons around the country -- Boston, Chicago, Philadelphia, New York City, Long Island. To our shock, they responded to our emails with completely different recommendations. The solutions varied from removing some bone in the base of his skull to procedures so nightmarishly invasive it was hard to believe they could be contemplated, much less performed, by sane men.

A surgeon at New York's Columbia-Presbyterian Hospital eventually convinced us to try a new, conservative approach that would, in reassuring words, "leave no hardware" in my son's body. In October 2004, he and his team removed a sliver of his skull to create more room for the fluid.

We were hopeful, but those hopes were trounced when the headaches returned within a month; the syrinx was also threatening more than ever.

More doctors, more websites, more message boards, more emails from specialists...more crying. I remember breaking down in my boss' office as I described to him the feeling of being emotionally assaulted by fate -- like taking blindfolded ride on a new roller coaster.

My son's original surgeon was all but begging to try again, this time with a more aggressive plan. In the end, I saw him and his experienced partner as the most personally invested in my son's health, and the least inclined to take to his head like it was a Thanksgiving turkey. We went with them.

Three months after their first visit, the Columbia-Presbyterian surgeons went into my son's head again and immediately discovered the removed bone had surprisingly grown back. They trimmed it, but also expanded the thin covering of my son's brain, called the dura, like tailors letting out a pair of pants.

After each of these procedures, my child looked like the victim of a terrible highway accident. But worse than the long bandage crawling up the back of his head, the many patches glued to his chest, and the sharp needles stuck into each hand, was the look of helpless confusion in his eyes.

The nurses gave him a pain indicator card on which was printed an array of faces gradually becoming more anguished. I always expected him to point to the one most twisted in agony, but he usually chose the expression in the middle, a face not in terrible pain, but resigned to a bleak reality. My son's joy was displaced. He needed to come home.

After three nights in the hospital following the second procedure, we packed my son carefully into the minivan and drove back to the house. The headaches persisted, but over the next few weeks their frequency diminished remarkably. My son's first 24-hour cycle without any pain whatsoever reminded me of the first time he slept peacefully through the night as an infant. It's the kind of primal relief that drops you to your knees. 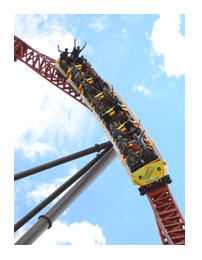 With the fluid resuming its normal flow, and only a few locks of his soft sandy-blond hair removed, my son quickly returned to his former life of playgrounds and Power Rangers. His surgeon's only caution was to avoid very rough or traumatic physical activity. In particular, no roller coasters.

My son is unlucky to have medical imperfections, but we're lucky to at least know them. Still, I imagine him years from now as a teenager at a carnival or fair, looking up at the whip-around amusements as I used to, teased by the liberating sensation of flying, and of falling.

Like any father, I wish I could take my son's place in all of life's harrowing rides, but I settle for what I can do: sit close, hold his hand, and tighten his buckle as we steel ourselves for whatever sudden twists and turns await around the bend.