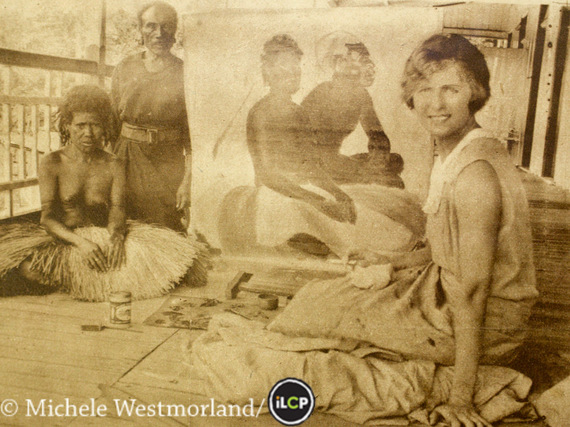 American artist Caroline Mytinger died in virtual obscurity at the age of 83 in 1980. After she and her friend, Margaret Warner, ventured to the remote locales of Papua New Guinea and the Solomon Islands between 1926 and 1930, she had a fleeting moment of fame and recognition. Returning to the United States with 25 large oil portraits and myriad sketches, these stunning images were a record of the indigenous people in a world that was about to change at breakneck speed. Between 1930 and 1935, exhibitions to showcase this work brought the world of Melanesia to the public and was shown at prestigious museums around the country -- the first being the American Museum of Natural History in New York under the auspices of Margaret Mead. Since then, the artworks have been crated away until I uncovered their whereabouts at UC Berkeley's Phoebe Hearst Museum of Anthropology. 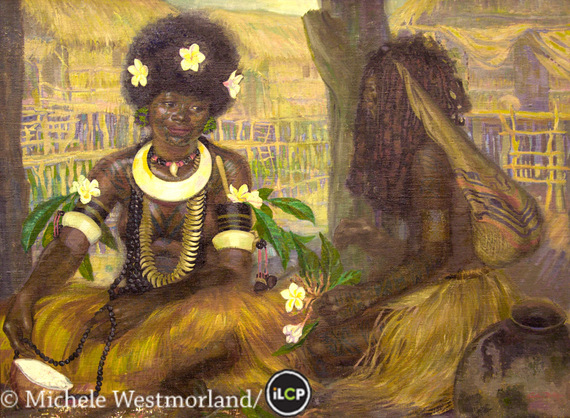 I discovered the story of Caroline and Margaret by a gift from a family friend. It was one of two books Caroline wrote and published in the 1940s. New Guinea Headhunt was one of the most exciting books I would ever read-most likely because of my lifelong passion for photographing the diverse marine life and people who live in the magical islands of Melanesia. That is not to slight the books. In fact, Caroline's first book, Headhunting in the Solomon Islands, received rave reviews from book critics and an honor from Reader's Digest as Book of the Month.

After years of research about Caroline Mytinger's drive to paint portraits of indigenous tribes and her ahead-of-her-time quests and independence, I decided it was time to plan an expedition to trace the footsteps of the amazing artist and her friend, whom Caroline described as "the bedeviled handyman." For two months, my expedition team traveled by vessel to many of the same locations where Caroline painted. The team that documented this journey consisted of photographers, a filmmaker and audio person, a historian and a Papua New Guinean anthropologist. There were also a number of support people on the ground to assist with introductions and translation. The expedition carried stacks of prints of Mytinger's artwork to share with the local people. The question was, would these people care about what was depicted in the artwork done almost 80 years ago? Remarkably, I found the prints inspired long conversations with the elders about traditions that have been lost or forgotten. Some village leaders expressed interest in re-establishing certain designs in dress or tattoos. It must be noted, however, that all cultures and traditions evolve, and it is not for the outsider to make value judgments about retaining old ways or dispensing with them in favor of change. 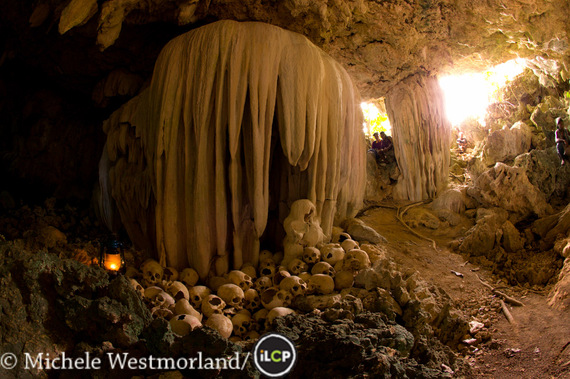 image: Remains of the past. These piles of skulls are likely the repository for victims in headhunt raids. Estimated at over 150 years. Kaluabu Skull Cave near Hiliwae Village. Tawali Area, Milne Bay Province, Papua New Guinea

The most rewarding part of the journey was discovering descendants of subjects in four of the paintings. My interview with Oala Mase, the grandson of a sorceress named Kori Taboro who posed for Caroline's painting For the Dance, revealed deep emotions and memories. Looking up from the painting with tears in his eye, Oala stated that before his grandmother passed away, she told him that a white woman had once painted her likeness. Oala prayed that someone would come tell him this story and show him the portrait. 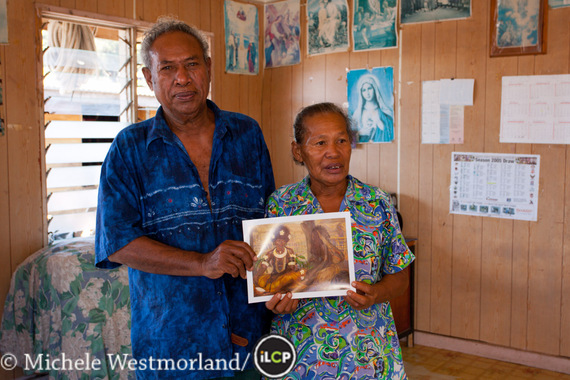 image: The grandson, Oala Mase, of Kori Taboro in the painting "For the Dance" by Caroline Mytinger. Oala's wife is pictured with him holding the print of the painting.

In the painting Heera, which means body décor, Ahuia proudly displays traditional attire, including a magnificent headdress. Most of these beautiful pieces of art were destroyed by missionaries during the 1920s and 1930s. As part of the project, I felt compelled to have a headdress reproduced and donated to the Papua New Guinea National Museum & Art Gallery in Port Moresby. The local expert and artist who created the headdress was named Siaka Heni, of Hanuabada. I documented, in video and still photography, Siaka completing this massive headpiece, replete with bird of paradise and parrot feathers, just as his forefathers had designed them. 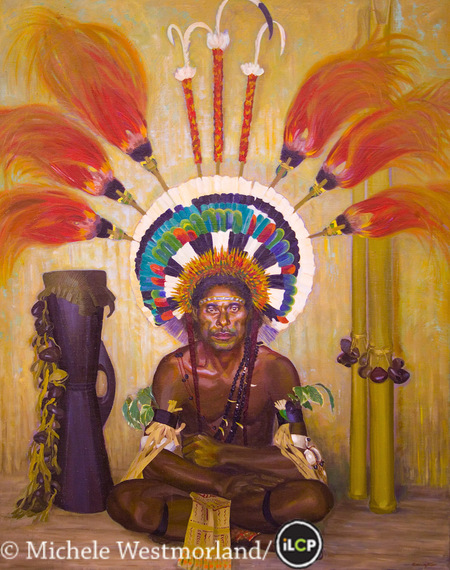 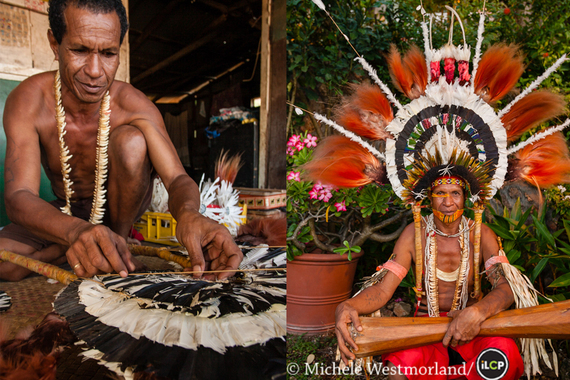 image: Siaka Heni is a master headdress artist in the village of Hanuabada, Papua New Guinea. He was commissioned to replicate the headdress in the painting "Heera" then proudly wore it at a reception hosted by the United States Embassy in Port Moresby. The headdress was donated to the PNG National Museum & Art Gallery by the Mytinger Project.

Two years ago, I was introduced to a growing contemporary art community in Papua New Guinea. One of these young artists, Jeffry Feeger, is passionate about painting portraits of people living in a changing world. Jeffry simply states. "Culture is fleeting; it is always running away from you." Jeffry's paintings tells stories of people who are concerned with today's social issues and loss of land and environment -- these are not portraits of islanders with painted faces, colorful headdresses and traditional clothing. Inspired by Caroline's art, Jeffry has created a series of his own paintings for an upcoming exhibition, "One World, Two Visions". 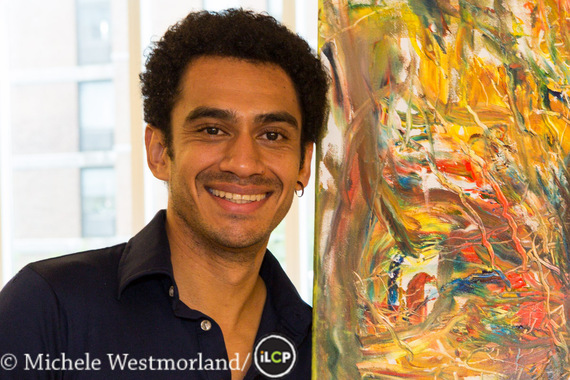 image: Jeffry Feeger in New York where he was performing in the New York Arts and Musical Festival 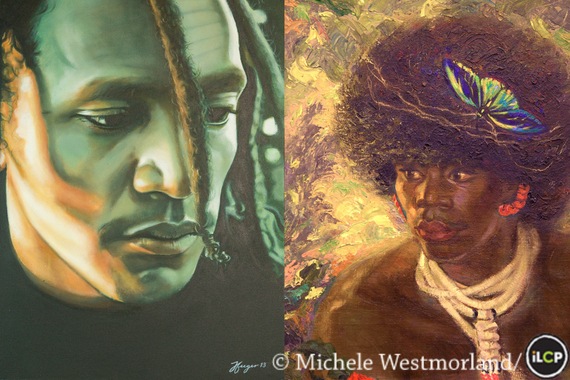 So, what is significant about this story? It continues the dialogue about cultural preservation, celebration and pride. The Headhunt Revisited project will be targeting a date to add content and round out the story. Today, plans are in the works to continue filming Jeffry working in his studio in Alotau, PNG, and to introduce him to the descendants of Kori Taboro -- some five generations of family members -- for future portraiture.

More than 90 hours of footage was shot and some 10,000 images captured. A documentary film is in early post-production and a companion book is in development. Both will include the rich and beautiful paintings by Caroline Mytinger, photographs by myself, and artwork by Jeffry Feeger.

All forms of art -- painting, photography, and filmmaking -- are instrumental in communicating the stories of culture, tradition and pride. Art in any form spans oceans and decades. 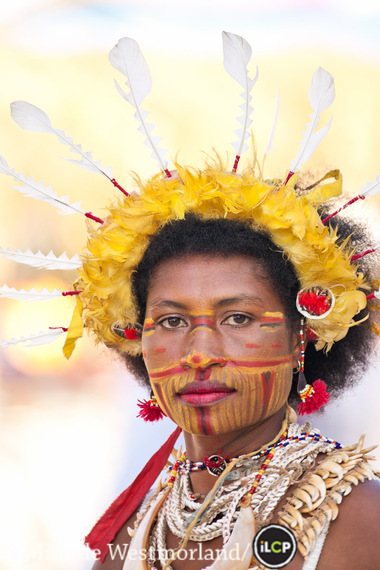 image: Woman from Elevala Village outside of Port Moresby.

Thank you, Jeffry Feeger, for allowing me to share your story and painting.

Michele Westmorland is a Senior Fellow of the International League of Conservation Photographers. Although she is known for her underwater photography and marine environmental issues, her passion for photographing culture has also been recognized. She has been diving and traveling to Papua New Guinea and the Solomon Islands for more than 20 years and has developed a deep respect and admiration for the diverse population residing in these magical island countries.

The International League of Conservation Photographers (iLCP) is a charitable organization enlisting the skills and expertise of some of the best photographers in the world to advance conservation efforts around the globe.