Eating what is cooked and served in a caring way evokes one of our first experiences of feeling at home in the world, the experience of being fed by another being. That is one reason that cooking and eating with others can heal the adult self, one reason that it can so easily make us feel connected to another person, a family, a culture, a political community. 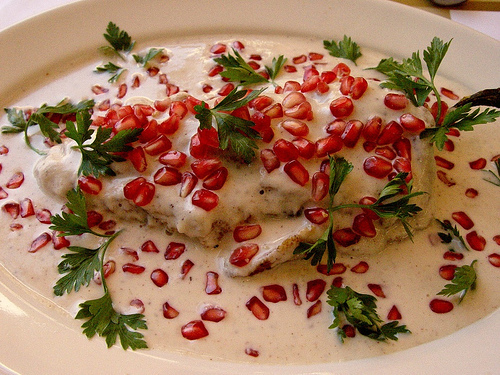 How do you peel a walnut?" my daughter asked as she looked, not too happily, at the mound of nuts on the kitchen table. We'd spent three days in the kitchen laboring over the 12 dishes we'd planned for a large buffet, and chiles en nogada, or chiles in walnut sauce, were the final stage of our cooking marathon. That very evening some forty faculty and students from all over campus would be arriving to celebrate our new multicultural graduate program, and if any dish could instill a sense of community it would be chiles en nogada.

Making simple recipes like tacos de crema, macaroni with serrano chiles, and refried beans had been easy and even pleasurable, but the chiles in walnut sauce were posing a challenge. I'd combined Frida Kahlo's recipe with one I'd taken from the internet, and the latter called on us to peel the walnuts before pulverizing them for the sauce.

"Mom," said Hannah, rubbing at one of the walnuts, "this brown stuff isn't coming off."

"This is a window into the lives of generations of women," I said, ineffectually scrubbing another walnut with my fingers. "Can you imagine how much time they spent working in kitchens?"

"I love cooking with you like this," Hannah had said when we first began.

"I love it too," I'd said. Our years of cooking together and of struggling through difficult recipes had created a strong sense of solidarity.

We decided not to peel the walnuts, since Frida's recipe didn't call for it, but we did roast the two dozen poblano chiles and then pulled off their skins. Then we chopped a picadillo out of shredded meat, fruits, nuts and cinnamon, and, cradling the chiles in our hands, began to stuff them with the sweet and savory mix. We were treating those chiles as if they'd just been born, but, despite our labor, they were developing some ugly splits. We decided not to flour them, coat them in egg mix, and then fry them in hot oil as Frida's recipe required.

"It's too risky," I said, entertaining grim visions of the chiles bursting their sides and spilling their colorful innards into a smoky pool of oil. Did Frida fry her own chiles, I wondered. Then came the sauce-easy, sweet, and cool. Four cups of (unpeeled) walnuts pureed with cream cheese, Mexican crema, cinnamon, and a fragrant half cup of sherry. Finally, seeds from six pomegranates and sprigs of parsley to go on top. Red, white, and green-the colors of the Mexican flag.

I had been thinking about a Mexican novel for the entire three days, Laura Esquivel's Like Water for Chocolate. I'd been imagining Hannah and me as Tita and Chenca, two characters who spend much of their lives in the kitchen. A takeoff on nineteenth-century Mexican romance, Like Water is a novel about love and also a novel about politics, the latter being represented by the Mexican Revolution and the ongoing struggle of Tita and her sister Gertrude against patriarchal culture.

Each chapter of the novel is organized around a recipe, and the process involved in making the chapter's dish -- the grinding, the toasting, the chopping, the boiling, the frying, the cracking of eggs-is so thoroughly woven throughout the pages that cooking, an often invisible form of labor, becomes as central to the story as romance and revolution. Cooking, indeed, becomes an emblem of the domestic work that makes romance and revolution possible. It is the force that keeps women and men alive not just physically, but emotionally, spiritually, and politically as well.

Cooking is like that, always there, and if it is as it should be, it not only nourishes our bodies but gives us the comfort of feeling loved, cared for, and secure. Eating what is cooked and served in a caring way evokes one of our first experiences of feeling at home in the world, the experience of being fed by another being. That is one reason that cooking and eating with others can heal the adult self, one reason that it can so easily make us feel connected to another person, a family, a culture, a political community.

Like Tita and Chenca, Hannah and I were laboring in the service of politics and love. The new graduate program was meant to be revolutionary-cross racial, multi-cultural, and oriented toward political activism not just inside, but outside the classroom as well. And I had done enough organizing by then to know how cooking for others, not just from duty, but with generosity and lightness of heart, can develop and sustain those ties of feeling that are, at bottom, what make political community possible.

In Like Water for Chocolate, food is given magical force. Quail in Rose Petal Sauce invites Tita and Pedro to enter each other's bodies both spiritually and sensuously as they sit at the dining table. It prompts Gertrude to run away with a revolutionary, sitting behind him, naked on his horse. The Chiles in Walnut Sauce provoke the guests at Tita and Pedro's wedding to make passionate love. Magical realism like this suggests the power of emotion, of the unconscious, and of cooking as emotion work in the day-to-day activities of our lives.

Like life, the novel is full of mothers, those who nourish and those who do not. The bad mother, Elena, controls Tita, insists that Tito serve her until she dies, and forbids Tita to marry Pedro, the man she loves. Cruel, repressing, she is the mother who denies. Even after death, she reappears, forbidding Tita to be happy. Like a force of nature, she returns again and again, suggesting the lasting influence of how we are mothered. But Tita finds good mothers to take Elena's place - Chenca, the cook who tends to Tita in the kitchen, and Dr. John and his Indian mother, Morning Light, who feed Tita healing foods after Elena brutally entombs her daughter in the Dove Cot. Tita herself becomes a nurturing mother to Esperanza, her sister's daughter.

Like Tita I, too, had found alternative mothers-in Dick, my gay ex-husband, in my women friends, in colleagues I had come to love. But most of all I had found mothering in being motherly-to Hannah and to my political community. Cooking for, and eating with, others had all but eclipsed those days in my mother's house -- the shame, the lost identity, the spilled water on the floor. Like Chenca, I wanted to pass on, to Hannah and to others, the recipes, the utopian practices, the ways of being and of labor that make history more than a tale of struggle; that make it also a love story, a story of caring for others.