Vince Hannemann, the eccentric creator of the "Cathedral of Junk" in Austin, Texas maintains that his enormous accumulation of "junk" grew out of the playful sculptures he built in his backyard as a child. He began construction on his 33-foot-high edifice in 1989 with a few hubcaps and a shopping cart. 25 years later, this multilevel structure towers over his suburban neighborhood with several cupolas and staircases, attracting thousands of pilgrims a year. Tattooed across his knuckles is the self-proclaimed title, "Junk King."

Following a serious accident, I traveled to Austin for a conference, barely able to hobble around the uneven, muddy terrain on crutches. Since I was unable to ascend the winding staircases like the other hipsters, my eyes were immediately drawn to the crutches which adorned the open spire of the cathedral.

Was it a postmodern Wunderkammer of Texan proportions? An ambitious art installation meditating on patterns of consumption and waste? Or simply the junkyard of a madman? Hannemann's colorful assemblage of technology and "old things" juxtapose Barbie dolls with road signs and toy guitars with car tires. CDs figure prominently in his sculpture "because they are shiny." A quick tour of the inside of the cathedral reveals a meticulous order within seeming chaos: objects are arranged according to color and aesthetic composition. The life of the collector, wrote the German writer and philosopher Walter Benjamin, is torn between the poles of order and disorder.

"It's not Homo sapiens, it's Homo hoardus," Hannemann declares. "What differentiates us from animals is that we collect without a reason." Unlike contemporary psychologists like Randy Frost, who argue that hoarding is a pathological response to loss or trauma, Hannemann believes it is a natural human inclination. "Almost everybody tells me, 'Grandma would have loved to see this' or, 'Now I finally understand what Dad was doing in the garage all of these years!'" It's in all of us, he insists, this drive to collect, to hoard, to order our world. Only he seems to have given it particular aesthetic expression.

Hannemann's work offers an incisive view into the mindless way we consume and dispose objects. Irreverently reusing and recycling them, he forces us to reconsider our own relationship to the material world. The underside of consumption is waste: in order to make room to buy new things, we need to throw out the old. Hoarders are both fascinating and repelling because they represent an inability to part with objects in a socially acceptable way. They hold on to things for too long, past their expiration dates and planned obsolescence, after their use value has come and gone. But unlike other hoarders who accumulate secretly, Hannemann has elevated his private hoard into a public exhibition, elevating junk into something artistic, even spiritual.

A&E's hit TV show Hoarders presents us with the terrifying spectacle of what our houses would look like if we held onto everything that ever crossed our path. As Scott Herring has pointed out in his recent book, the term "hoarder" is as much a normative label as a psychological one, designed to separate socially acceptable forms of accumulation from pathological ones. Like other folk devils or scapegoats, Herring writes, the hoarder is typecast as a material deviant who threatens contemporary social, economic, or sexual norms.

Or, in this case, norms of private property and neighborhood propriety. Ironically, it was the interventions of his disgruntled neighbors and the city that transformed this DIY shrine into a public institution. After multiple complaints, he was forced to bring his cathedral into compliance with city building codes in order to evade demolition. According to the Wall Street Journal, he had to dismantle four tons of junk and enlist the help of engineers, architects, and local inspectors.

In spite of this struggle, he insists he does not have a political message. "People read all sorts of things into this structure," he says, "But it's not coming from me." Maybe that's what makes it more real than other parts of Austin. Much of the new Austin feels a bit overhyped, like it's trying a little too hard to keep itself "weird." But this cathedral feels different somehow, definitely weird and irreverent, but not in a self-conscious, fixie-bike kind of way.

According to Hannemann, his cathedral has healed many people through the years. Looking up at the sky through the makeshift spire, I'm not gripped by the same sort of mortal fear I sometimes feel when staring up at the vaulted ceiling of a Gothic cathedral. Unlike the closed ceilings of a cathedral, this one opens up into the expansive, blue Texas sky. "Are you going to steal her crutches if we stay too long?" My mother jokes, supporting my arm. "After seeing this place, you just may be walking out without them," he quips. Whether it's stealing by healing or healing by stealing, Hannemann seems to have left his mark. 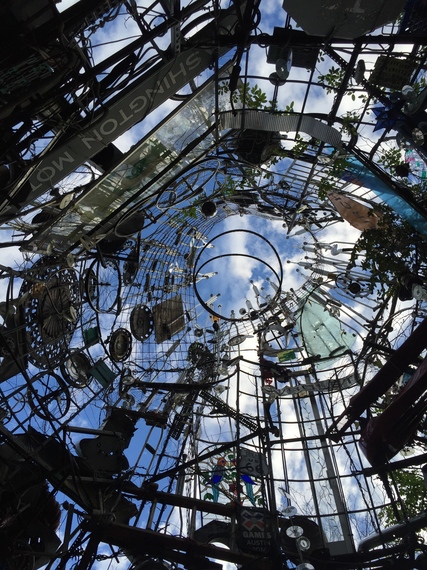