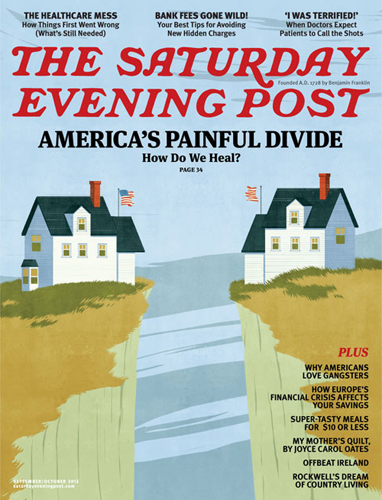 I love my sister; hate her politics.

Where do we stand on the issues? Let's just say that one of us gets all our information from Fox News and the other one gets it from The New York Times.

This makes conversation, er, difficult. At family get-togethers, we can talk about the weather, museum exhibitions -- she was an art history major -- and we're on pretty safe ground discussing which family members merit jail time and which are harmless head cases. Anything about global warming, immigration, or health care puts us in dangerous territory. Taxes? Fuhgeddaboudit!

It's a safe bet that many American families are painfully divided along liberal-conservative lines. Former First Lady Laura Bush was a registered Democrat before marrying George W. (Since he left office, she's shown her true colors by supporting both gay rights and abortion.) There's also Maria Shriver, who recently split from Arnold -- not solely over politics obviously, but that couldn't have helped. And, of course, very much in the public eye, there are the pundits Mary Matalin and James Carville.

If the partisan divide is wrenching at the family level, on a larger scale, it's tearing our country apart. There are not only red states and blue states, but also red and blue neighborhoods. "If you find yourself in a Whole Foods store, there's an 89 percent chance that the county surrounding you voted for Barack Obama. If you want to find Republicans, go to a county that contains a Cracker Barrel restaurant (62 percent of these counties went for McCain)," writes NYU professor Jonathan Haidt, in "America's Painful Divide," for The Saturday Evening Post.

"The most important lesson I learned is that each side, each team, sees some threats that face our nation, and is blind to the threats that the other side sees," says Haidt. "It's as though there are two meteorites headed for the earth -- global warming and the exploding costs of entitlement spending -- and each side is hopping mad about the other side's inaction on the meteorite that it sees, and unwilling to take any action to stop the meteorite feared by the other side. This is the reason I'm a centrist: Both sides are right, and both sides are blind."

Regardless of who wins the presidential election, America has some healing to do. It's going to be difficult, but not impossible. Instead of demonizing each other, Haidt's view is that we need to make the effort to understand and respect each other's views even if we disagree. That doesn't mean capitulating. It's called being open-minded.

I think I owe my sister a call.