What if a bad back or unexplained nerve pain aren’t really bodily malfunctions, but instead manifestations of painful emotions, stress and unmet ambition?

“The subject is pain,” says John Sarno, M.D., the subject of an upcoming film about chronic pain and the mind-body connection. “But we’re not talking about pain that’s due to some structural abnormality, but rather the pain that is generated in us when we put ourselves under pressure to be perfect and good.”

Sarno, a former professor of rehabilitation medicine at the New York University School of Medicine, posits that bodily pain is caused by repressing one’s emotions and by stress, not by physical ailments. According to Sarno, “goodists,” or people who put other’s needs ahead of their own, are the most likely to suffer from chronic pain with emotional underpinnings.

It’s not a new concept. Sarno published his best-selling book, Healing Back Pain: The Mind-Body Connection, in 1991. Since then, the book and its follow-up editions have risen to near cult status. Forbes even called him "America's best doctor."

Filmmaker Michael Galinsky, a patient of Sarno’s and co-director of the upcoming documentary All The Rage, which chronicles the filmmaker's ongoing struggle with back pain and includes high-profile chronic pain patients, such as Larry David, John Stossel, Howard Stern, Jonathan Ames and Sen. Tom Harkin -- all of whom found relief from Sarno’s methods.

Given that so much of Sarno's method involves self-work, some patients report significant healing simply from reading Sarno's book.

To heal, Sarno's recommendations are two-fold: Individuals need to address any repressed anger and, since the pain they are experiencing is psychological, should resume all normal physical activity -- a controversial proposition. In fact, the National Institutes of Health recommends reducing physical activity for the first few days after experiencing back pain; avoiding heavy lifting or twisting; and gradually resuming exercise after two to three weeks.

“I consider that I practice very conservative, standard medicine,” Sarno says in the film. “My theories may involve the unconscious, but that doesn’t make them any less rigorous.” Still, Sarno’s success remains largely anecdotal and his methods have been largely unrecognized by the mainstream medical community.

(Story continues below the video)

The Huffington Post spoke with Galinksy about Sarno’s work and about what the upcoming film might mean for how we view chronic pain.

Q: There’s a shocking statistic you use in the movie trailer that chronic pain affects more than 100 million adults -- more than the number affected by heart disease, cancer, and diabetes combined, according to your research. How has that happened?

A:All of health is completely related to our attitudes and our beliefs.

I think the real question goes back to what Dr. Sarno said in the forward to his book: If you are treating the symptomatology without understanding the cause, you are going to get an epidemic. And I think he’s right. What he is pointing out is that the vast majority of chronic pain symptoms are the repression of one’s emotions. When we repress our emotions, it really throws our autonomic nervous system out of balance. It’s related to essentially a fear response.

Q: Dr. Sarno published his best-selling book in 1991. Why has traditional medicine been so slow to come around to his methods?

A: This idea really has so much to do with cultural context. Did you happen to see the New York Times Magazine article about Ellen Langer’s work? She did a study in 1981 where she put a bunch of 70-year-old people in a monastery -- eight guys -- and basically set dressed the monastery so it was as if it was a place they had lived 22 years earlier. The only pictures were of them as younger men. They were told to pretend that it was back in the day. They came out after five days and all of their cognitive functioning and physical functioning had improved. Dramatically. Now here’s the thing. She did not even publish the paper. Because she thought that she would be ostracized and that she would be ridiculed. 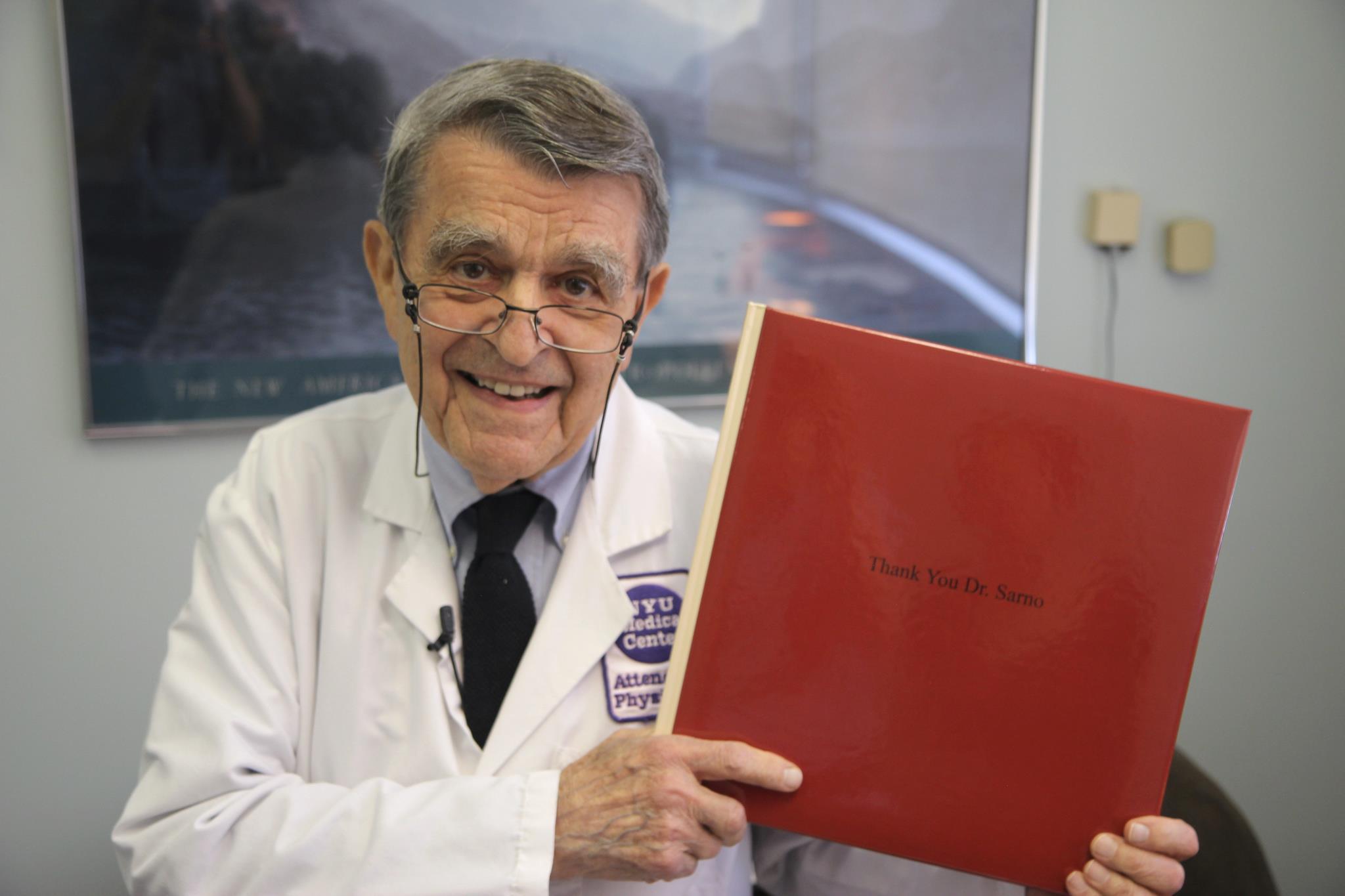 Q: Did Dr. Sarno do any studies that prove chronic pain has psychological underpinnings?

A: Dr. Sarno was a practitioner. He wasn’t a research scientist. Some people fault him and ask, “Why didn’t he do research?” Because he was dealing with patients and research wasn’t what he did. But one of his students, David Schechter, who practices now in Los Angeles, looked at the data and did a study. They called 51 patients a few years after the treatment and found that most of them were doing better [pain scores decreased 52 percent for "average" pain; 35 percent for "worst" pain; and and 65 percent for "least" pain], which is astounding -- most people never get over chronic pain if they are going through treatment methods. This stuff is rising. People are aware of it.

Q: Do you expect that the film will function the same way as Dr. Sarno’s book? Will audience members leave the theater with a new mindset and free from pain?

A: That’s a hope. But we want to be clear: We are not doctors. We are working really closely with doctors to make sure that the science and the medical aspect is right. Just like the book can help people to start on their own healing paths -- it’s not a pill. People have to do some work and have to increase their knowledge, but it is totally related. We’d love for it to help people get better.

A: It’s absolutely framing. That’s what we were dealing with. But it’s also people’s resistance to dealing with emotions. They quickly say, “You’re blaming me,” because they are not going to look at their emotions. It's also the cultural context. Once we all start to understand that we’re not blaming the victim, we’re trying to give people agency to heal themselves -- that’s a totally different way of framing it. That’s exactly what we were facing in the first five years of trying to make this film. We’re not blaming people or telling them it’s all in their heads. In fact we are doing the opposite. We’re saying, “You have the power. You have this incredible power.” What we’ve done is outsourced our own personal power to doctors, who really aren’t equipped to deal with our emotions.

At one point, we were going to call the movie Unthinkable, because these ideas are simply unthinkable for the majority of people. But I see a massive shift in culture. Four years ago, when we started working on the film again, I had a Google alert set for chronic pain. It was entirely device manufacturers, PR releases for drugs, and pain clinics. I’d say a third of it now are articles that recognize the connection between stress and illness. And there’s tons of stuff about mindfulness and meditation.

Q: Reading the testimonials on the Thank You, Dr. Sarno webpage and on Amazon, the word miracle comes up again and again. How do you respond to people who say this all seems a bit cultish?

A: Definitely there is the danger of it. There is this almost cult-like response to it. And yet at the same time, it’s very much related to the fact that these people have been so maligned and mistreated by the medical system. They are finally given somebody who’s recognizing them, giving them agency, and allowing them to recognize what they thought originally [that stress was causing their pain].

Q: When someone experiences physical pain, how should she know that it’s not an acute injury, like a wrist sprain? And if it is a structural injury, are there still mindfulness takeaways?

A: People do physically injure themselves. And that’s a good point. This is not to say that physical injuries don’t happen. But a broken bone will heal in six to eight weeks, depending on how stressed you are.

A big part of that with Dr. Sarno is journaling. Journaling is, in some sense, a form of mindfulness. It’s paying attention to our thoughts and allowing them to come up. You are supposed to journal and you are supposed to pay attention to your emotions. It’s integral to the process. The more people who are able to embrace that idea, the better off they are and the more likely they are to heal.