Exactly 50 years ago, I was a 13 year old in eighth grade, and living with anorexia. However, in those days you didn't hear the term anorexia much, it was referred to as "self starvation." Same thing, different terminology.

I was one of five children and was in the second year of a private school that was competitive and academically rigorous, so I felt I better up my game. Be smarter, be better, and be perfect. That's what I needed to be. So, I started with my exterior. At 5 feet 7 inches and about 130 pounds, I was hardly chubby, but I aimed to be as rail thin as the models on magazine covers. After all, that was the gold standard of how one should look I thought. Then I needed to be a super student. Well, the good grades came, the weight came off, and off, and before you know it, I landed in a doctor's office. I'll never forget the sound of the heavy wooden office door closing in a cramped exam room.

I recall the doctor saying something to the effect of, "You know you're dying don't you?"

I mumbled something incomprehensible. I mean what do you say in response to that? I was now 98 pounds, and spiraling downward rapidly. Normal body functions stopped. Blood pressure plummeted, bones protruding, clothes were anchored on with huge safety pins so they wouldn't fall off.

I was exercising two hours a day, and on some days only allowing myself a fudge ice cream bar, and tiny bits of a sandwich. When you're anorexic, your body is starving, and so is your mind. You're malnourished. The healthy fuel that a balanced diet provides a body was absent. I was running on fumes. When anorexia grabs hold, it hangs on with a ferocity.

You see the world through a distorted lens. I thought I was fat, yet in reality I was starving......not just in the obvious way you saw. But my soul was starving, and so was my spirit. The cure came. And it came from two people in my life who I saw every day from Monday through Friday: my middle school principal and my history/PE teacher. They saw how I was wasting away and they sensed they needed to act fast. My poor family saw the protruding bones and observed all the behaviors too. I know they were shocked and baffled. But, oftentimes it's better for all to have an interested third party intervene. I had known these educators, admired them, felt comfortable around them.

Long story short, my principal came to my home one day, and said: "Sara, you need to take a vacation. You're working too hard!" I respected her so much, I quickly said okay.

My parents had already planned a vacation for themselves, so I was allowed to tag along. The warm Hawaiian sun and relaxing atmosphere was healing. Then, my principal did something even
more remarkable.

She took me out to dinner with her husband and three children, not once, but many times. I couldn't hide food, or move it around the plate, and feed it to the family dog like I did at home. She made me eat and I did. I admired my principal, didn't want to disappoint her, so I ate, and nourished myself.

My PE teacher saw my bony frame. I couldn't hide it with the regulation shorts and blouse we had to wear in gym class. She, like my principal, never mentioned the disease. She encouraged me to find a sport I enjoyed, and even join the track team. I didn't feel I had enough talent, but the fact she thought I did, meant so much and elevated my sagging spirits. It took me a year to heal, but I did.

Two people who took the time and effort to lead me out of the abyss -- who were present, listened, encouraged me, laughed with me, and fed me -- ultimately healed me from a dangerous disease that had engulfed my young life. There is no way I can repay them. What I have tried to do in the 50 years since is be present, listen, and be there for my students. 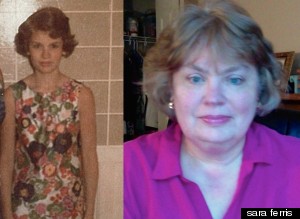 I, too, became a teacher, in part because of these two inspiring people who were there for me so long ago. They understood that this is a disease not just about food, but about insecurity, striving too hard to be perfect, getting stuck in "over control," communication issues, and ultimately accepting ourselves as we are. That is perhaps the most powerful lesson I learned. Accept and love yourself, and be grateful for the gift of life.

1. Stop aiming for perfection, just do your best.

2. We are more than the sum total of our physical parts.

3. Be proud of your appearance, but don't be obsessed with it.

4. Know how to de-stress without stuffing or starving.

5. If you know someone who is anorexic, be present and listen, and remind them there are dedicated people who specialize in eating disorders who can help them.

6. Enjoy and embrace life fully......each breath is a miracle.

This story is part of a HuffPost Healing, a Huffington Post series about physical, mental and emotional healing. Have you had an experience with healing? If so, we'd love to hear it. For Sara, it was learning to love and accept herself. What was it for you? Reach out by e-mailing healing@huffingtonpost.com.