Gayle told me that after her movie "My Nose" came out to great acclaim, she was surprised by how many women could relate to her story. "My Nose" is Gayle's first mother-daughter relationship movie. It tells the story of her mother's obsession with Gayle's nose, and her mother's deep-seated belief that if Gayle had plastic surgery to change the shape of her nose, her life would be okay, which to her mother, meant finding a husband. After this movie came out Gayle discovered that women are hungry to talk about their relationships with their mothers. At speaking events women would seek Gayle out, and they would tell Gayle their stories about having a hurtful, critical, emotionally disconnected relationship with their mother. Through these stories Gayle realized that the story of how mothers and daughters hurt each other needs to be told. She wanted to document her mother's and her journey from hatred to love, and how she, as a daughter coped with her mother's criticism. 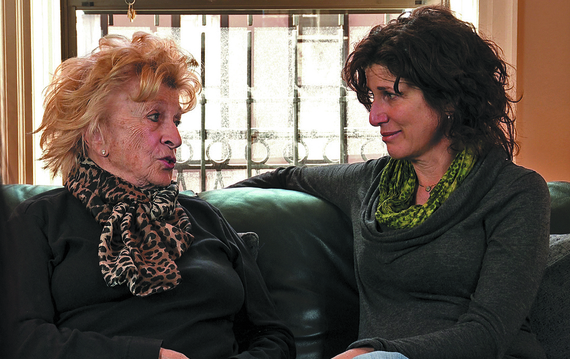 Sadly, many mothers and daughters suffer from some kind of relationship conflict. With women's lives having changed dramatically since grandmother's day, mothers and daughters are struggling to understand the differences in their respective realities. As a mother-daughter relationship therapist it concerns me that mothers are being blamed for causing mother-daughter relationship conflict. All too often I hear mothers being treated as mentally ill, or misrepresented as bad or inadequate mothers by the media, and the therapy community as well. Critical and abusive behavior is not okay, whether it is perpetrated by a husband or mother, but I find that society is all too quick to blame mothers for being critical of their daughters, without understanding what has happened in their lives that has made them so critical of their daughters.

In my practice I hear many daughters from around the world share similar stories about having an instinctual knowing that their mother's hurtful behavior stems from their mother's life experiences, rather than from them being bad daughters. This doesn't mean that being criticized by your mother isn't emotionally hurtful or harmful. It is! Like Gayle, these daughters find that their instinctual knowing helps them in their journey to find out why their mother is so critical of them. I have found that the underlying cause of mothers being overly critical of their daughters is mothers being emotionally neglected; their needs, feelings, thoughts, and desires not being understood or inquired after. I see countless mothers and daughters hurting each other because in their family, women's emotional needs do not matter. This lack of emotional caring causes mothers and daughters to fight. It causes daughters to be overly responsible for their mother's needs, and mothers to be unable to hear what their daughter needs from them. And this theme is generational. It is passed down from mother to daughter.

The answer to healing this generational pattern is not, as Gayle said in her interview, to criticize mothers. Being a mother is an extremely difficult job, especially if you have little support, or if you haven't had enough emotional care yourself. Abusive behavior should never be accepted or tolerated, and neither should the silencing of women's needs, because that in itself is abusive.