The tech industry has the capacity to innovate and solve many global problems, but can it save the sea from overfishing, habitat destruction and acidification?

This question was posed on a panel on ocean innovation during Dreamforce, the uber-conference sponsored by cloud computing company Salesforce. Wendy Schmidt, Founder and Vice President of the Schmidt Ocean Institute, noted that technology can solve many of the problems, but only if we understand the crisis and scale of the issues involved.

"We must change our old way of understanding the world and look at the world in a new way. Oceans are essential, they are our pharmacy and pantry and a primary source of protein," she said. 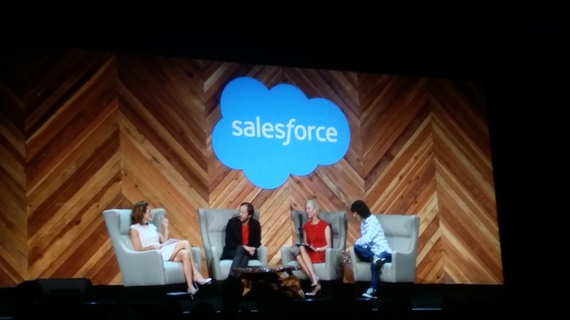 Considering that the world's oceans are worth $24 trillion, according to a WWF report, the implications of declining ocean health are enormous. "Entire countries are dependent on the sustained health of the ocean," said UCSB Professor Douglas McCauley, adding that ocean assets are unlike any other. "If the ocean gets sick we are in big trouble. Fishermen know that it is about protecting the ability to fish, and they are on the front lines."

McCauley added that industrial fishing was causing a huge shift in the oceans. Factory farming compounds the problem. In addition, more people are now living near coasts, which means more pollution. Suburbs are being built on top of marine habitats. Seabed mining grinds up the bottom of the oceans. The opening up of brand new industries is so impactful that the world could potentially move toward a marine industrial revolution that could cause greater extinction of animals.

Tech and Innovation Can Help Heal

The picture appears bleak. However, help is on the way. High tech answers may help heal the oceans. Boyan Slat, panelist and CEO of The Ocean Cleanup, plans to rid the ocean of plastic through technical means whereby plastic concentrates itself, reducing the theoretical cleanup time from millennia to years. "We hope that our ocean cleanup can be a symbol of us using ingenuity to solve this problem and make sure this society can be sustainable so that we can continue to exist," he said, adding that garbage is a symbol of the negative side effects of human progress.

Wendy Schmidt was also positive about the future, especially now that the world is networked. However, she said that, "We need to talk and share, a conversation needs to come. We have to start using our resources more wisely to protect the things we most care about."

The Schmidt Ocean Institute, co-founded by Wendy Schmidt and her husband, Eric Schmidt, Executive Chairman of Alphabet (and former Executive Chairman of Google), is combining advanced science with state-of-the-art technology. Some of its activities include technology development and collaborative scientific research aboard Falkor, an oceanographic research vessel equipped with modern equipment such as high definition cameras and other gadgets.

Travis Fabian, senior director at Salesforce Foundation, discussed a new app called MAZU, whereby users can tracks and snap photos of unknown vessels that are likely fishing illegally, and said that, "Creativity can solve problems like this."

The promise of technology won't be realized without policy change. The fate of the oceans may be tied to the results of the decisions on climate change to be made by the gathering of world leaders in Paris in December, formally called the United Nations Climate Change Conference (COP 21).

"These two weeks in Paris will decide what the next 1,000 years will be like for the oceans," McCauley said. "Brave decisions will help the oceans stay a life giving neighbor. Weak leadership will send the seas sailing towards a hotter and more acidic future. Everything we do for the oceans matters less if we fail to control climate change.

A version of this story appeared in ImpactAlpha, which provides investment news for a sustainable edge. For more news, sign up for the Financing Fish newsletter or follow @impactalpha on twitter.