Obesity is a national epidemic and a major contributor to some of the leading causes of death in the U.S., including heart disease, stroke, diabetes and some types of cancer. More than one third of U.S. adults -- 35.7 percent of us -- qualify as obese according to National Institute of Health guidelines and the prevalence of obesity among children and adolescents, especially among minorities, has almost tripled since 1980.

The obesity epidemic has given rise to another epidemic, Type 2 diabetes, which is a man made disease. No hunter-gatherer ever suffered from this disease and it was extremely rare in our great-grandparents' time. But today, thanks to the excessive amount of sugar that we consume and our lack of exercise, it's become extraordinarily common. "We evolved to crave sugar because sugar is an energy-rich food," Harvard professor of evolutionary biology Daniel Lieberman explained in an NPR interview with Terry Gross, "but we didn't evolve to digest large amounts of it rapidly."

In this New Year, we need to change our diets and the ways we think about and consume food. But to get there, it has to be a community effort. Here are 10 ways we can all work together to create a fitter, healthier society. 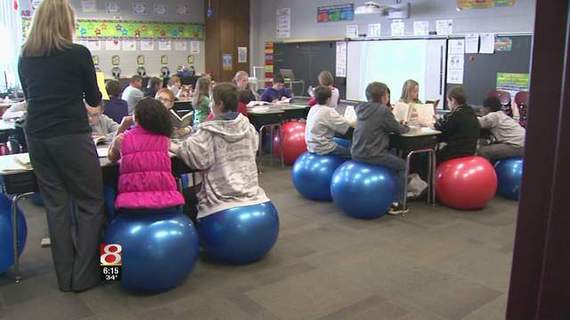 1. School. Even though children are bursting with energy, we train them from an early age to sit still for eight hours a day, with just a measly 45 minutes to eat and run around. Kids need regular breaks for to get up, move around, exercise, jump and be active -- and not just gym class.

2. The office. The places where many of us spend 40 to 70 hours a week, sitting at our desks, sitting in meetings, sitting in our boss's office, are chambers of fat. As I wrote in my book Upgrade, "there's no reason to neglect our health or put aside our need for a healthy physical space just because we are at work." Extended sitting slows the body's metabolism of glucose and lowers levels of HDL cholesterol. We can use standing desks or sit on exercise balls instead -- we all need to change our mindset and get up off our behinds.

3. Grocery stores. Neighborhood stores and national chains need to think about the health of their customers and carry more fresh produce and other healthy choices. Processed foods that are high in trans fats and sugar should be banished to the back shelves or banned completely.

4. Celebrity chefs. So many of the foods they prepare are filled with fat and sugar. They are tastemakers and influencers, and they can use their platforms to focus on healthier fare and portion control, and to show us that bigger and richer is not always better.

5. City and suburban planners. Their obsession with the car has killed walkability. Too many of us live in isolated McMansions in neighborhoods that have no urban fabric. Most Americans spend far too many hours of their days stuck in traffic. Every city needs sidewalks, bike lanes, bike sharing programs and parks. And playgrounds should keep their lights on longer, so kids can go out and play more.

6. Exercise. The recommended daily minimum of exercise is 20 to 30 minutes, three to five days a week. It should be vigorous enough to raise your heart rate between 60 and 85 percent. That is not a big commitment.

7. Employee fitness programs. In their book The Power of Full Engagement, Jim Loehr and Tony Schwartz report on one corporate fitness program that yielded "a reported 47.5 percent reduction in absenteeism over a six-year period for participants... They also found that such employees used 14 percent fewer disability days than nonpariticapnts -- a total of nearly 12,000 fewer disability days overall. A study in the journal Ergonomics concluded that 'mental performance was significantly better in the physically fit than in the un-fit.'"

8. City fitness programs. Mayors can use their bully pulpits to raise consciousness about fitness and goals, sharing details about their own efforts to diet and shape up. City facilities should be made available for exercise.

9. Parents. At the very least, they can put a stop to their children's junk food binging, restrict technology and force their children to hit the backyard or park for active play.

10. Healthy food choices. The average adult male needs to take in about 2,200 calories a day to maintain their weight and 2,000 to lose weight; for most females the requirement is approximately 1,800 and 1,200 respectively. Countless apps are available to help you keep track of your daily caloric intake. Restaurants and fast food chains should be forced to report caloric information on all menus so customers can choose wisely.