Ascending a cliff, boulder or even an indoor rock wall requires a large amount of physical strength and endurance. Some conquer climbs through nutritious meals and campus board pull-ups. Meanwhile, for some diehard climbers, that endurance was historically powered by canned beans and a wide variety of snacks from the Tioga Gas Mart outside of Yosemite.

But with or without the gas station nibbles, there's no doubt that climbers know a thing or two about a healthy lifestyle. Here's how rock climbing helps you lead a happier, healthier life.

Rock climbing builds muscle and endurance.
Contrary to what many beginners may believe, climbing requires much more than upper-body strength. The success of sending -- or completing -- a route relies heavily on a long list of physical factors, including intricate footwork, lower body strength and lean muscle mass. Although not often thought of as a common form of cardio, ascending walls is a sure way to get your heart pumping, similar to the way climbing stairs or jogging does. A one-hour climb session can burn well over 700 calories. Plus, tricky maneuvers and lengthy reaches often require developing flexibility that wasn't there before. To increase bendability, more and more rock gyms are incorporating yoga studios into their facilities. 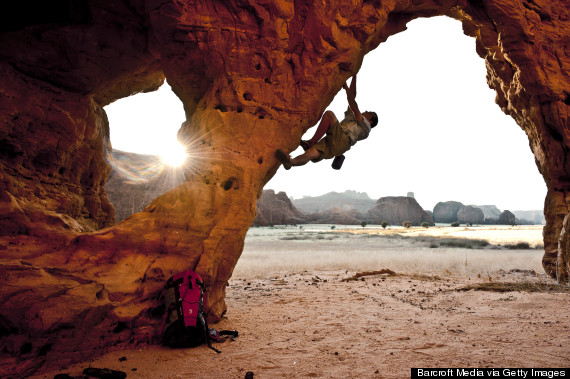 In addition to building up muscle and helping you get that cardio, climbing involves problem-solving skills -- which explains why bouldering (a type of climbing that is generally done unroped, at lower heights on literal boulders) routes are actually called "problems." But whether athletes are scaling cliffs or conquering long traverses in their local bouldering cave, time on the rocks is anything but mindless. "I think the mental side of climbing is often overlooked," Alex Johnson, team climber with The North Face -- with many first-female ascents under her belt, tells The Huffington Post. "The movement in climbing up a route often demands body awareness and problem-solving. More often than not, the way to the top is not as direct as you might assume, and it takes laser focus to work through which holds to grab and where exactly to place your foot before shifting your body weight."

All of those hours logged outdoors also don't hurt. Research shows that time spent outside may decrease symptoms of ADHD, improve memory, boost creativity and even wake your brain up with the same effect as drinking a cup of coffee.

Rock climbing reduces stress.
Exercise itself has been shown to reduce stress by increasing levels of norepinephrine, a chemical that helps balance our brains' response to stress. Some researchers suggest exercise be used to help treat a variety of mental illnesses, including addiction, depression and anorexia. But climbing itself has an extra trick up its sleeve: Climbers who totally lose themselves in the flow of the activity enter a mindset that can create a sense of euphoria and even block pain, according to Indiana University. And climbing outdoors could carry extra benefits: Time spent outdoors has been linked with lower stress levels, making a solid argument in favor of outdoor climbing trips. 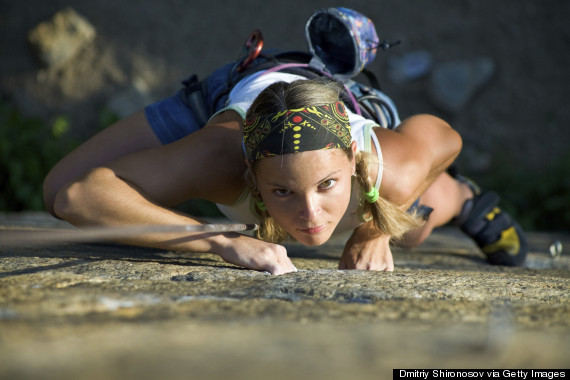 For many, rock climbing is about much more than getting a good workout and releasing stress. "From a physical standpoint it's incredible exercise, but some of the best tidings I get from climbing are what I would define as spiritual," Cedar Wright, team climber with The North Face, writer and filmmaker, tells The Huffington Post. "From a mental standpoint, climbing is an amazing teacher, instilling focus, balance, determination and a whole ... host of valuable life skills."

In fact, a small study in the journal Adapted Physical Activity Quarterly explored the benefits of indoor rock climbing by children with special needs. The research showed that after six weeks of climbing, the kids' self-efficacy and their belayers' ratings of the children's efficacy improved dramatically.

No climber is a stranger to overcoming challenges, and there's a good reason rock climbers appear on all of those motivational posters. "I think the mental benefits of climbing are a bit more subtle [than the physical ones], and I'm sure they're different for everyone. But I think it’s a very empowering sport," professional climber Alex Honnold, known for his record-breaking speed up big-wall climbs and his occasional ropeless ascents, tells The Huffington Post. "The process of overcoming your own fear all the time helps put life’s other challenges into perspective."

Interested in taking up the sport yourself?
So you're ready to feel the grime under your fingernails and explore the world from a bird's eye view. Luckily, it's easier to start rock climbing than you may think. We talked to the experts to find the best tips for beginner climbers: