Growth in seniors' out-of-pocket health care costs has outpaced Social Security's cost-of-living adjustments by more than a third since 1992, according to a new analysis by Social Security Works of data from the Center for Medicare and Medicaid Services. Beneficiary spending on Medicare premiums, deductibles, co-pays, all private premiums, and all other services covered and not covered by Medicare, has grown in real terms from $3,865 per year in 1992 to $5,261 per year in 2010, an increase of 34 percent. 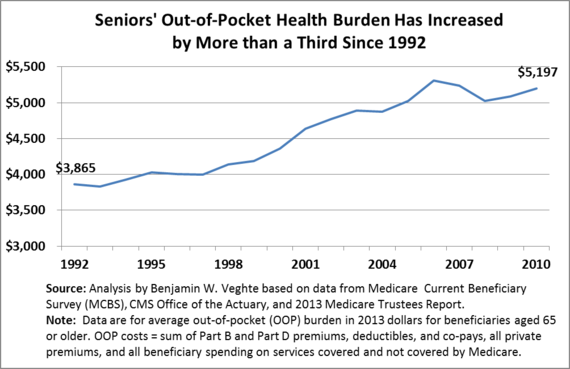 The vast majority of seniors and people with disabilities live on modest, fixed incomes. Median household income for seniors is $34,000, and for Social Security Disability Insurance beneficiaries just under $30,000. Our Social Security and Medicare systems are designed to provide seniors and people with disabilities with a measure of economic and health security, as well as predictability with regard to their budgets in retirement - insurance protections which they earned by contributing to Social Security and Medicare throughout their working years.

Seniors' high out-of-pocket expenses, however, undermine their economic security in retirement. Social Security benefits were never intended to go largely toward medical bills. Yet in 2010, even with Medicare (including prescription drug coverage which took effect in 2006), out-of-pocket health care costs consumed over a third (37%) of the average Social Security check of seniors and their surviving spouses. If the cost-shifting proposals on the agenda now - such as requiring ill seniors to have "more skin in the game," or increasing Medicare premiums for middle-class beneficiaries - become law, this would cut net Social Security benefits even further.

What proponents of further cost-shifting misunderstand is that the cost problem we face is not a Medicare problem - Medicare is actually better at controlling costs than our private health care system. The problem, rather, is that our system of health-care provision is inefficient: we spend twice as much as those of similar countries, with worse health outcomes. The New York Times' Elisabeth Rosenthal, and Time Magazine's Steven Brill, have published revealing exposes detailing the manifold perverse incentives and inefficiencies in our health-care system, and showing how these are perpetuated by an army of provider lobbyists in Washington, DC.

True courage on the part of policymakers would be demonstrated by taking on these vested interests to improve the efficiency of our health-care delivery system - which would be a boon to the entire economy - rather than asking seniors and people with disabilities to bear an ever greater share of the rising amounts billed by providers. For example, we could allow Medicare to negotiate with drug companies for lower prescription drug prices, which is prohibited under current law. Medicaid and the Veterans Administration already do so, as do most other countries' health care systems. Allowing Medicare to also use its market power on behalf of beneficiaries could save the federal government between $230 and $541 billion - and beneficiaries another $48 to $112 billion - over 10 years.

And if policymakers want to ask upper-income Americans to contribute more to financing Medicare, they should do so through progressive income or payroll taxes on working-age Americans, not higher premiums for seniors living on a fixed income. And they should limit their proposals to the truly upper income, not those with incomes of $47,000.

The vast majority of America's seniors have little or no ability to cope with further increases in health care costs. They have paid into Social Security throughout their working lives. Congress has a sacred obligation to protect them from out-of-control health care costs in retirement. There is ample scope for improving the efficiency of our health care system. We should control costs, rather than shifting them onto our seniors and people with disabilities.