Even though I don't trust the markets, not with Goldman's program and high-frequency trading making up more than 50 percent of trading volume (P.S., they're not doing it for you), still the markets can tell us some truths. Look what happens to insurance company stocks when Baucus from Montana hunkers down with Republicans from Wyoming, Iowa and Maine.

Here is how the share prices of three major insurance companies (Cigna, United Healthcare Group, Aetna) responded on Tuesday, July 28 to the Monday night announcement that the group of six senators is going to eliminate the public option from their version of the health care reform legislation [graph produced using Yahoo Finance]. We have basically an 8-10 percent gain for these companies from the Senate announcement. And as the graph below shows, the S&P 500 index (yellow) was essentially flat. The market caps of these three companies together are around $53 billion, which suggests a $4-5 billion value from the announcement by the group of 6.

I have been spending a fair amount of time on economics blogs, trying to make sense of the new world we now live in. It's not a happy place, unfortunately, particularly if you live in California, where we're balancing the budget (sort of) on the backs of the poor.

(Even though California pumps more oil than any state but Louisiana and Alaska, we're the only one that doesn't tax the oil companies for taking our resources. Don't expect your child to get an education, your grandmother to get home care, your neighborhood to be safe or your job to exist if you live here. The Governor and the rump minority of Republicans are too busy protecting thems that got.)

Here's a short list of whom I'm reading, in case you want to read along. Some are occasionally wonky but I skip the parts that I can't comprehend.

http://krugman.blogs.nytimes.com/Krugman of course
pseudonymous Tyler Durden pulls no punches at Zero Hedge and he's been way ahead on Goldman Sachs running the markets
Baseline Scenario particularly for Simon Johnson, former World Bank Chief Economist
Brad Delong ... smart economist and tough on the media
Barry Ritholz ... contra thinking
Karl Denninger ... bit of a ranter but educational
Credit Slips ... high wonk factor but good on debt and its consequences
China Financial Markets ... on the ground in China... which is one big experiment in government intervention

And Janet... Worth some time.... calmly alarming... just what you want from CSPAN.

For a market perspective, I get the daily posting from the head of a Toronto investment firm. You can subscribe to "Breakfast With Dave" by going here.

And since pictures tell a story, here's a sweet one to close on. Do you really think that the banks aren't secretly broke? 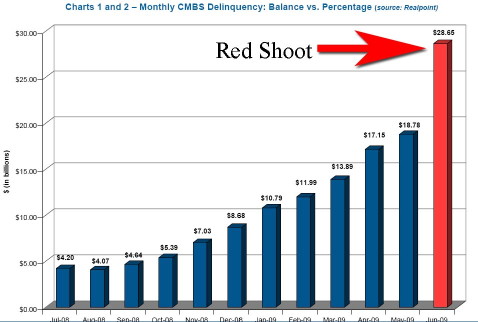 Failing to tell the American people the truth about our economy has the potential to be Obama's Vietnam. Johnson knew he'd inherited a mess but couldn't bring himself to say so. Let's pray that BHO can find a way. There's nobody else out there.

Movie producer and manager by day