The overall recovery of the U.S. economy is still sluggish, but if you're looking for work, you'd be wise to consider the health care sector.

"Health care is adding several hundred thousand jobs a year regardless of what's going on in the broader economy, but when the broader economy hits a tailspin, then that health care jobs growth stands out that much more," said Dan Diamond, the managing editor of the Advisory Board’s Daily Briefing.

Over the last five years, health care job growth has outpaced employment trends overall. Health care jobs account for one out of every six of the jobs created in 2012 so far, according to HuffPost calculations.

Employment rose in the health care industry over the last six years, even as jobs disappeared overall during the Great Recession and have reappeared slowly since. Indeed, when the U.S. hemorrhaged jobs in 2008 and 2009, health care companies continued hiring, as this chart from the Advisory Board shows. 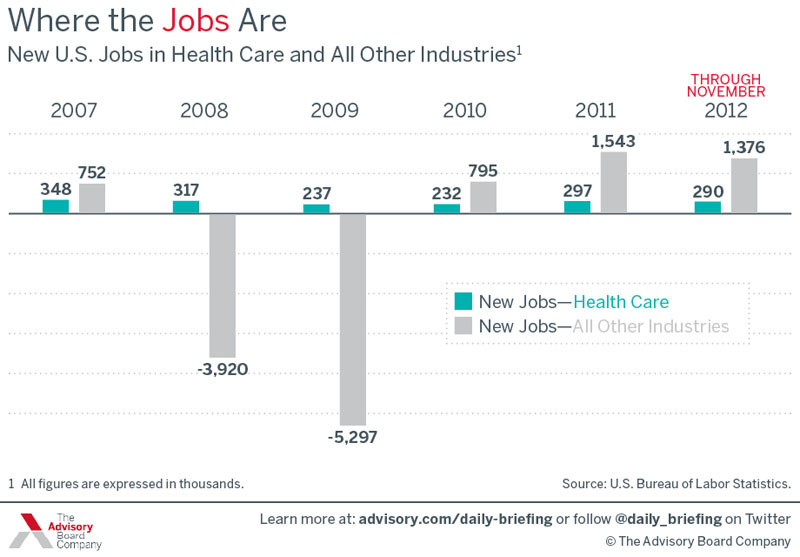 Via: The Advisory Board Company

"Health care is traditionally recession-proof," Diamond said. That's because no matter what else is going on in the economy, people get sick and injured. Studies show the rising costs of health care make it harder to get the treatments people need, but no one can totally forgo medical care. That's a big reason why the health care sector hasn’t reported job losses in a month in more than nine years, Diamond said.

Demand for health care, and thus the need for more health care workers, is expected to keep growing. "That Baby Boomer population and the overall aging of the U.S. population is a key factor in demand," Diamond said. In fact, health care will supplant retail to become the top source of jobs in the U.S. within two years if current trends continue, he said.

By 2020, there will be 5.6 million new health care jobs, according to a report published by Georgetown University’s Center on Education and Workforce this year. President Barack Obama's health care reform law will have a "negligible" effect on health care job growth despite extending health insurance coverage to an estimated 30 million people by 2022, the Georgetown study concluded.

While this may amount to positive news for workers who find new jobs, it's also a reflection of a bigger trend that's not necessarily good for the U.S. economy: rising health care spending. The United States spent $2.7 trillion on health care last year, and the total tab is projected to reach $4.78 trillion, or 19.6 percent of the U.S. economy, by 2021, according to federal statistics released earlier this year.

Diamond acknowledged that rising health care spending is an area of concern, but noted hiring in this area also can be beneficial. "More money put into the health sector, in theory, can circulate throughout the broader economy," Diamond said. "In a recovering economy, you don't want to pick and choose the jobs that you're getting."

CORRECTION: An earlier version of this story incorrectly said the jobs data were from October. They are from November.